In this episode: After his breakout roles in Dead Poets Society and Reality Bites, actor, director, and author Ethan Hawke has followed his own path as an artist, starting a theater company, writing two novels, acting in decade-spanning film productions directed by Richard Linklater including, most recently the amazing Boyhood. He’s just published his first graphic novel, which he wrote with artist Greg Ruth. It’s called  INDEH: A Story of the Apache Wars, and its tells a complex and very human story of relations between the Apaches and the white Americans who ultimately took over their lands.
On this week’s episode of Think Again – a Big Think Podcast, Ethan Hawke and host Jason Gots discuss fatherhood, perpetual warfare, and the daily struggle between light and dark within every person. It’s a raw, intense, sometimes laugh-out-loud conversation that spans continents and decades in under an hour.

Surprise discussion clips in this episode: Sam Harris on spirituality, Steven Kotler on Steroids (not literally ON them, but talking about them), and Jerry Kaplan on robot wars. 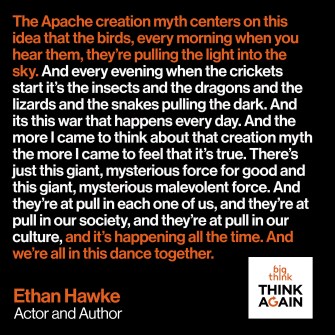 Living the Meaning of Life: A Praxis Farewell

Neither happiness nor success “can be pursued,” says Viktor Frankl. These states of being must “ensue…as the unintended side-effect of one’s personal dedication to a cause greater than oneself.”