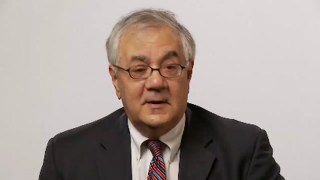 Barney Frank on why he originally opposed tightened regulations for Fannie Mae and Freddie Mac.

Question: When the Bush Administration tried to tighten regulation of Fannie Mae, the New York Times reporting you opposed the move.  Do you stand behind this? (Scott Sumner, The Money Illusion)

And here's the sequence.  The year after I said that, 2004, the Bush Administration ordered Fannie Mae and Freddie Mac significantly to increase the number of mortgages they bought issued to low income people.  I criticized that at the time in 2004.  There's another quote that doesn't get mentioned as much in Bloomberg saying, "This is bad for the borrowers and it's bad for Fannie Mae and Freddie Mac."  We couldn't overrule that.  The Bush Administration put in a significant increase in the number of low income mortgages.  In fact, one of the Republican members of the Committee put an amendment in on history which specifically mentioned that 2004 decision by the Bush Administration.  The Republicans controlled Congress.  They didn't let us stop it.

Once that happened, I did agree that we needed to regulate Fannie Mae and Freddie Mac.  I should note, by the way, that during the period, 2003, I was in the minority.  I was a Democrat in a Congress controlled by Tom DeLay, so no, I didn't really have the power to decide that.  The Republicans during their 12 years of control did nothing to deal with it.  In 2005, though, I will say this.  In 2003 I didn't see a crisis.  In 2004 I was critical of them pushing into those sub-prime loans.  We did two things.  First, Democrats tried to restrict sub-prime loans.  The Republicans wouldn't entertain the bill and Greenspan wouldn't use his authority to do it.  Secondly, I joined the Republican Chairman of the Committee then, Mike Oxley, in trying to regulate Fannie Mae and Freddie Mac.

And so again, we're talking about Republican control of Congress.  Mike Oxley, the Chairman of the Committee, the man who gave his name to Sarbanes-Oxley, said the reason they didn't get Fannie Mae/Freddie Mac regulation that year was that the Bush Administration blocked it and he said that he got a one finger salute from George Bush.  This was quoted in the Financial Times, and that's what blocked it.  The Secretary of the Treasury at the time, John Snow, agreed with Oxley that it was a good bill.  But the more conservative Republicans, I think, they were opposed to any kind of housing help, so it died.

In 2007, the Democrats became the majority.  We won the election in 2006.  I became the Chairman of the Committee.  In 2007, within a few months of my becoming Chairman, the Committee that I chaired passed a tough Fannie Mae/Freddie Mac Regulatory Bill, frankly tougher than the one that Oxley had been able to get through.  Hank Paulson, the Secretary of the Treasury supported it.  Unfortunately, it was held up by the Republican-Democratic fighting in the Senate.

In 2003, I said I didn't see a problem.  In 2004, when Bush ordered them to do more about sub-prime mortgages and wouldn't regulate sub-prime mortgages, I said yeah, there is a problem.  2005, I joined Mike Oxley in trying to pass a bill to regulate Fannie Mae and Freddie Mac.  It was defeated by in-tribe Republican feuding, Republican House, Republican Senate, Republican President.  In 2007, when I for the first time was the Chairman and we were in the majority, we passed a good bill.  Unfortunately, it was delayed in the Senate until 2008 and by that time, too many sub-prime mortgages had been bought, and it was too late.

Question: How can Fannie and Freddie be structured to avoid the moral hazard problem and a too-cozy relationship with regulators? (Russ Roberts, Café Hayek)

Barney Frank: Yes, in 2004 the Bush Administration significantly increased those housing goals and particularly ordered Freddie and Fannie to start buying up a lot of low income individual mortgages, and I opposed it at the time.  I do think going forward we have to separate out the function of providing liquidity for the mortgage market in general and some form of subsidy.  They should not be in the same entity.  There was a mistake to have them in the same shareholder-owned corporation, and I believe going forward you're going to see a total rewriting of housing finance.

One of the things that happened under the Bush Administration was the FHA, was allowed to deteriorate.  We're building that back up again with safeguards.  So I think the answer is you separate out the function of providing the equity in general for the mortgage market and doing some subsidy and in my judgment, the subsidy again, as I said before, should be focused on affordable rental housing, not in pushing low income people into owning homes that they can't afford.