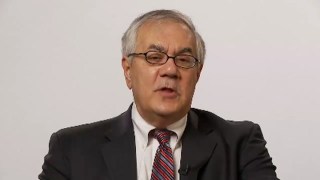 Question: Do you believe policymakers were/are captured or co-opted by the financial industry?

Barney Frank:  Well, the answer is that you didn't have to capture people who were willing.  Under the Bush Administration in particular, but to some extent under the Clinton Administration, the dominant philosophy was the market knows best.  In 1994, Congress passed a bill to give the Federal Reserve the power to regulate sub-prime mortgages no matter who gave them, not just from banks.  Alan Greenspan explicitly refused to use that power.  He said, "Look, the market knows better than I."  He now admits that that was a cause of an error because the single, biggest problem you have with all those mortgages that were made that couldn't be paid, that were then sent out and sold out--they were the base of that chain reaction.

Question: Who are your philosophical influences, and how do they impact your policymaking?

Barney Frank:  I find Joseph Stiglitz, who was the Chairman of the Council of Economic Advisors under President Clinton, and then was fired from the World Bank because he was being critical of their policies that were anti-working people.  I have found him to be extremely thoughtful.  Paul Volcker, the former Chairman of the Federal who preceded Alan Greenspan, is an example of someone who understands the financial community but also knows precisely because he does, that you need regulation.  And Paul Volcker has been someone we have paid attention to.  Elizabeth Warren has been a major guide in the consumer area.  She's a professor at Harvard Law School who began to look into the consumer area.  And one of the things I'm proudest of is when we passed the Bill in the committee I chaired to create a Consumer Financial Protection Agency, not everything we wanted, but more than 90% of it, Elizabeth Warren was very, very congratulatory and she said, and I love this quote, (she came up with the idea of the Consumer Agency): “They told me not even to try to get such an agency because in Washington, the banks always win.  Well, they didn't win today."  So those are three people who have had an impact.  Joe Stiglitz on the overall economic importance, Paul Volcker on the regulatory area and Elizabeth Warren on the Consumer Protection.

Question: How do we credibly commit to not bailing out large firms going forward?

Barney Frank:  By making it illegal and we do that in the bill that we passed and I think the Senate will pass.  You're right.  In 2004 the Republications were in control of Congress.  In 2004 some of us on the Democratic side tried to pass further legislation when giving the Federal Reserve the right to regulate sub-prime mortgages.  Now, we want to go beyond that and just outlaw some of them.  The Republicans in control said, "No.  We don't believe in that.   That's regulation."  They wouldn't do any of what was called for.

What we do in our bill is, first of all, to say that no federal funds can go to keep the institution in business.  "Too Big To Fail" meant that the institution would be kept going.  We make that illegal.  No federal money can go for that.  There might be money used to pay off some of the debts if the failure to pay any of the debts would cause a systemic crisis, but that won't be taxpayer dollars.

We also in our bill did a couple of other important things.  Under the bill, nothing can be done including paying off some of those debts to prevent a crisis until all the shareholder money is wiped out, until all the Board of Directors and executives are fired.  The institution is over.  That's statutory and it's illegal to do anything other than that.  Before that, we have a systemic risk regulator that steps in and would've said to an AIG, "You are way over extended.  You must stop selling credit default swaps.  You must greatly increase the capital you have to hold against losses."

In addition, we say with regard to the "Too Big To Fail" operation that you tell them in advance, "We're going to break you up.  We don't want you getting into that sort of position where you owe more money than you could conceivably pay."  But the fundamental point we make is this: if it does not work and an institution does get so indebted, that institution is over.

And one last point.  Over the objection of many in the financial community and not requested by the Obama Administration, we added an amendment hotly contested that said, "Even if you're a secured creditor of one of those institutions, we don't have to pay everything.  We may give you a 10 percent haircut."  In other words, we want to make people very nervous.  I'll tell you one thing I was very proud of.  The Securities Industry and Financial Marketing Association, which represents the securities people, they objected to our bill in how we deal with an institution that's going to be put out of business.  They said our bill was not 'creditor friendly'.  They said the Republican approach was better for creditors.  That goes particularly to the question of "Too Big To Fail" and of moral hazard.