Bernie Sanders is on a mission to save socialism. Not the concept, the term. He has described his politics as democratic socialist for decades. His popularity in the 2016 Democratic primaries saw a resurgence of the label among Americans, especially millennials. And last month he delivered a speech titled — with no sense of Calvin and Hobbes-style irony — “How Democratic Socialism Is the Only Way to Defeat Oligarchy and Authoritarianism.”

But Sander’s battle is being fought on two fronts. On the left front, socialists’ organizations argue he has misappropriated their label, while the right front has surged with moral panic over socialism’s burgeoning popularity.

These competing ideas and definitions have left many confused, and since 2016, article after article, ad nauseam,has been penned to try to untangle socialism‘s lexical mess. At the 2019 Aspen Ideas Festival, linguist John McWhorter pitched a novel solution. Why don’t we just toss the word out?

Many people still understand socialism in its Cold War context, but the term has evolved much since. (Photo: Wikimedia Commons)

How do we define socialism? (Depends on who you ask.)

Before we get into McWhorter’s argument, it’s worth exploring said lexical mess.

In fairness to Sanders, he has been clear in how he defines democratic socialism. As he explained at a Georgetown University speech in 2015:

For Sanders, democratic socialism offers a mixed-economy system to level the social playing field for all. It’s the system we have today, but with some quality-of-life upgrades such as universal health care, free college tuition, and a guaranteed living wage.

The problem is that Sander’s definition incorporates a free market and private ownership of production, both principles that stand in direct opposition to traditional definitions of socialism and democratic socialism. “To me, socialism doesn’t mean state ownership of everything, by any means. It means creating a nation, and a world, in which all human beings have a decent standard of living.”

Socialism. An economic system where the means of production are socially owned, as opposed to capitalism. In some understandings, the state does the owning and takes care of people’s needs; in others, worker cooperatives or communes perform that task.

Democratic Socialism. The means of production are socially owned by the state, cooperative, or commune, but such means are managed democratically.

Social democracy. A mixed economy with a free-market system. However, the government regulates the market and may enforce control over some portions of the economy. It is sometimes called the Nordic model.

Yes, what Sanders calls democratic socialism typically goes by social democracy, and it’s worth noting that labels like social liberal and New Dealer could potentially apply, too.

National Socialism.Socialism in this context is vestigial. The term was added to the National Socialists German Worker’s Party (i.e., the Nazis) name to draw in leftist support. But once in power, the Nazis pursued a virulently anti-socialist policy by dissolving trade unions, ending social welfare programs, etc. If someone tells you the Nazis were socialists, remember that national socialism is the adopted sibling of the socialism family. It’s related by name, not by blood.

This doesn’t even begin to consider socialism’s relationship with communism, which is a whole other headache to consider.

The Genesis of ‘Isms’

The case against Bernie Sanders use of socialism

This brings us back to McWhorter. Surveying socialism‘s historical baggage and many usages, he concluded the label is too polluted to be anything but toxic in American politics. It reminds us of the Soviet Union, he notes, and is associated (if unfairly) with the Nazi menace. And it’s just plain unpatriotic.

In recent years, Gallup has tracked American’s feelings toward socialism. Its 2018 poll showed that fewer than half of Americans, age 30 and older, viewed socialism positively. The older an American, the less likely they were to have a favorable view of the word.

Conversely, capitalism was seen positively among most Americans though, again, more favorably among older Americans.

It’s as though Americans are still channeling William F. Buckley when he said: “The problem with socialism is socialism. Because there are no socialists. Socialism is a system based upon an assumption about human nature that simply isn’t true.”

But McWhorter has his banhammer aimed at more than just socialism. He also argued the word liberal has become equally elusive. Like socialism, liberalism has been renamed, redefined, and repackaged in innumerable ways – social liberalism, neoliberalism, classical liberalism, progressive liberalism, radical liberalism (need we go on?). With each qualifier or semantic change, the term becomes more difficult to parse and makes discourse fraught with confusion.

What McWhorter is and isn’t saying

First, McWhorter is not arguing against any ideas espoused as liberal or socialist. He is merely arguing that the terms themselves obfuscate rather than elucidate.

Second, McWhorter admits that his is an odd stance for a linguist to take. Typically, linguists are content to sit and watch as words shift, drift, and evolve through languages. It is what words do, and like a nature photographer, linguists record the process. They don’t make judgments or interfere.

But McWhorter believes these terms have a uniquely destructive effect on our political discourse:

I think we need to talk about things in a new way. I think that we could have more time to talk about real things if we didn’t have these ancient, and frankly effed up, terms gumming up the works and allowing unscrupulous people to make accusations that don’t actually make any sense, but which have to be discussed leaving less time to talk about the crisis that our nation is in. 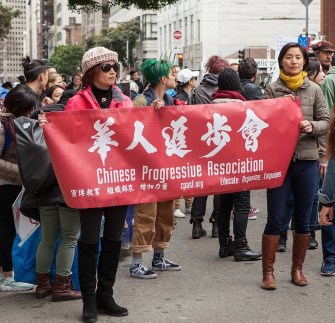 If not socialism, what term should Bernie Sanders adopt?

According to McWhorter, we already have a perfectly good word waiting in the wings, progressive. Unlike socialism, progressive is not weighted down by overly complex semantic change (yet) nor does it require listeners to perform tricky “mental acrobatics.” It would further alleviate confusion between liberal and libertarian — both of which stem from the Latin liber-, meaning “free,” but represent contrasting ideals — as well as nonpolitical uses, as in “liberal arts education.”

Across the board adoption of progressive would simplify our political discourse, streamline conversation, and make it so that bad actors can’t willfully play an ideological shell game (see President Trump’s comment above).

Can socialism be saved?

Earlier this year, I wrote an article wondering whether Sanders and Alexandria Ocasio-Cortez could redefine socialism in the U.S. There is some evidence that they are managing it.

The previously mentioned Gallup poll showed that more young Americans (age 18-29) hold a positive view of socialism than capitalism. Another Gallup poll found that more Americans today define socialism as meaning “equality and equal rights” versus “government ownership of the means of production.” For both the tipping point came in 2016, when Sanders started his presidential bid.

McWhorter acknowledges that word definitions can ameliorate over time, but typically they drift into pejorative territory. Nefarious used to simply mean “famous” before coming to mean “wicked.” Writing for the Atlantic, he points out that neoliberal originally separated middle-of-the-road conservatives from laissez-faire capitalists. Today, the word is little more than a “knee-jerk slur” used by the left to describe far-right conservatives.

Can socialism be saved? Maybe, but the struggle is uphill and the outcome unlikely. McWhorter’s solution is far simpler, far less messy, and offers a change our political discourse desperately needs. Maybe it’s time Bernie Sanders drop the socialism label.

A new study suggests that hunting dogs' barks convey emotional information about the animals they see.
Up Next
The Present

No, Mr. Putin, liberalism is not dead