Skip to content
Who's in the Video
Adam Alter
Adam Alter is an Associate Professor of Marketing at New York University’s Stern School of Business, with an affiliated appointment in the New York University Psychology Department. Adam is the author[…]
Go to Profile
Videos
The Internet Is Heroin and Your Smartphone, the Needle
The advent of portable technology has exploited our reptilian addiction switch like never before.
▸
6 min
—
with
Adam Alter

It’s not your screen you’re addicted to — it’s just the conduit for your high. NYU professor Adam Alter explains that behavioral addiction is similar to substance addiction: it feels good in the short term, but over time can negatively impact your mental state, social life, financial stability, and physiological wellbeing. There’s been a steep takeoff of digital addiction in recent years, with approximately half the developed world now exhibiting addictive tendencies when it comes to the internet. It comes down to portability. The more wireless our devices become, the more our addiction follows us around, and the more we turn to our phones as “adult pacifiers” — just a swipe of your screen is enough to feel relaxed again. Adam Alter is the author of Irresistible: The Rise of Addictive Technology and the Business of Keeping Us Hooked. 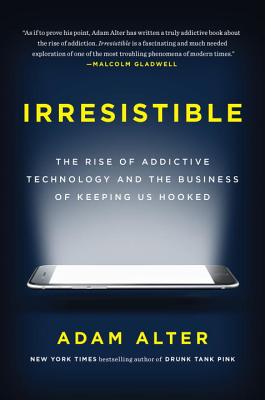 So substance addiction has been around for a very long time, by some accounts for many thousands of years, but there weren't behaviors around that were compelling enough to rise to the level of addiction until quite recently. And the reason is that, for them to be addictive, basically what has to happen is there's a behavior that you enjoy doing in the short-term that you do compulsively. So you keep returning to it over and over again, but then in the long-term it harms your well-being. And it can, again, harm your well-being in lots of different respects, social, financial, physical, psychological.

And I think the reason why we've got these new forms of addiction, there are two main reasons: The first one is that technology is much more sophisticated and advanced than it was even 20 years ago. You're able to deliver the kinds of rewards that you need for a system to be addictive. So basically what people are looking for is unpredictability and rapid feedback of either rewards (or if it's negative then negative experiences), and you actually need that mix of positive and negative feedback.

The other thing that I think is happened is that companies are much savvier about this. There are employee behavioral experts to tell them how to design their media, how to design the vehicles that deliver those media, smart phones, iPads, smart watches, things like that. And for that reason I think they are delivering products to us that are harder for us to resist. They've got enough features built in that we find to be pretty hard to resist, and then we end up developing addictions to them, and by some counts that applies to about half of the population of the developed world.

So when you're addicted to a screen it's not that the screen itself is something that you can't get enough of, it's what it's providing. I think one of the reasons while we're so addicted to screens or to the content they provide is that they go with us wherever we go. And that's relatively new. And so if you played video games in the '80s or '90s or even the early 2000's they didn't really go wherever you went as much as they do now, especially those games that were tied into the Internet. Those were tied into your PC, you'd play where you were and you didn't really leave with them as much. You had some portable devices, but those were much more primitive.

Basically we tend to develop addictions when we have a psychological need. And we get those whenever we're bored, whenever we're feeling a little bit lonely, whenever we're not really sure what to do with ourselves next, whenever we don't feel particularly efficacious (like we're having an effect on the world that we'd like to be having), those are the moments when you're looking for what some people call the “adult pacifier”. And smart phones tend to be a great adult pacifier because after those moments you turn on your screen, you swipe and you feel relaxed again. That's how people describe the experience.

So they tend to be excellent devices for delivering these small hits that we look for, and social media is a great example. So social media obviously now travels with us. It used to be confined to home computers to a large extent, but that's no longer the case. And people spend about three hours a day on average using their smart phones, which is pretty staggering. That's a huge chunk of the day of the waking hours that we spend when we're not at work. What that means is they're spending a lot of their time returning over and over again to check Twitter, Instagram, Facebook, Snapchat and so on, and they're checking for a number of things. One thing is that these media are bottomless, which means that you're constantly checking for new information; there's always something new to be kept up on. The other thing is if you happen to be a poster of content, you're very curious about getting rapid feedback as to whether people approve of that or they're not particularly interested in it. So a lot of the time what we do is we return over and over again compulsively to see whether we're getting the positive feedback that we seek when we post content.

And social approval is really important, but we're even willing to risk negative feedback, because the worst thing that can happen to a human is to be ignored. It's actually far worse to be ostracized or ignored than it is to get negative feedback. So when you put all of that together the idea now that we have access to theoretically billions of people in the world at all times wherever we are makes smart phones addictive. We can always get that feedback that we desire.

Up Next
What Caused the Big Bang? Consider the Beer Bottle…
▸
4 min
—
with
Lawrence M. Krauss