A staple of bad science fiction, mutant ants have been more of a figment of imagination rather than scientific reality. We’ve genetically altered mice and fruit flies, but growing mutant ants has eluded scientists due to the complex life cycle of the little critters. Now two teams announced that they managed to edit out certain genes from lab ants, altering their behavior.

The team from Rockefeller University published a paper outlining how they removed orco – a gene that plays a key part in an ant’s odor receptors. Deleting the gene by using theCRISPR-Cas9 technique resulted in the ants losing about 90% of their “olfaction”. This made them unable to socialize. The ants also changed in other ways, showing affected behavior. They laid very few eggs, wandered aimlessly, and showed poor parenting.

The other team, including scientists from NYU, Vanderbilt University, University of Pennsylvania, and Arizona State University, also used CRISPR to delete the orco protein in ants to affect their communication through pheromones, causing an “aberrant social behavior and defective neural development.”

You can read their paper here. 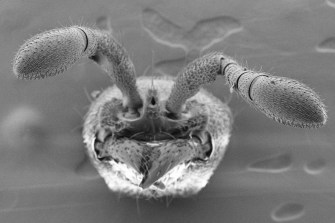 Researchers modified the ability of the ants to detect pheromones though porous hairs on their antennae. Credit: Rockefeller University.

This kind of interference with the social behavior of ants is considered a success because of the difficulty in altering the nature of insects with such a sophisticated social structure. NYU Professor Claude Desplan, who was involved in one of the studies called the modified ant they created “the first mutant in any social insect.”

“While ant behavior does not directly extend to humans, we believe that this work promises to advance our understanding of social communication, with the potential to shape the design of future research into disorders like schizophrenia, depression or autism that interfere with it,” said Desplan.

Why edit ant genes at all? Daniel Kronauer, author of the Rockefeller University study, says there are “interesting biologic questions” you can only study in ants.

“It was well known that ant language is produced through pheromones, but now we understand a lot more about how pheromones are perceived,” says Kronauer.“The way ants interact is fundamentally different from how solitary organisms interact, and with these findings we know a bit more about the genetic evolution that enabled ants to create structured societies.”

Check out this animation of how Kronauer and his colleagues tracked color-coded ants, while using an algorithm to analyze the resulting behavior.

MIT researchers design glue that mimics the sticky substance barnacles use to cling to rocks.
Life

These enormous centipedes are straight out of science fiction.
Up Next
Neuropsych

A recent study shows that children just 3 years of age learn how to deceive others for personal gain when exposed to competitive games.