Most children have the cognitive abilities needed for lying by the time they’re 3 1/2 years old. However, a recent study published in the journal Developmental Science shows that kids even younger than that can quickly and spontaneously learn to lie when they’re exposed to competitive games.

During the first sessions, almost none of the children attempted to deceive the researchers. But over the course of the study, the children began to realize that lying would result in personal gain.

“Not all children figured out how to deceive at the same rate,” said study author Gail Heyman. “At one extreme, some figured it out on the first day; at the other extreme, some were consistently losing the game even at the end of the 10 days.” 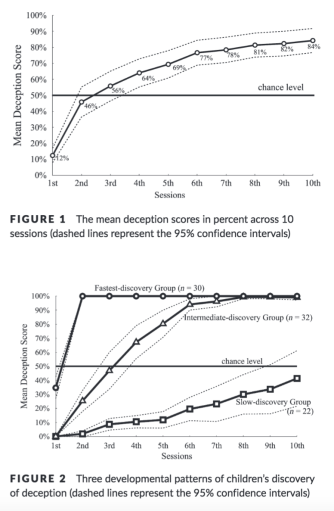 The researchers found a relationship between the children’s cognitive abilities and their ability to lie.

“One of these skills – what psychologists call theory of mind is the ability to understand that others don’t necessarily know what you know,” said Heyman. “This skill is needed because when children lie they intentionally communicate information that differs from what they themselves believe. Another one of these skills, cognitive control, allows people to stop themselves from blurting out the truth when they try to lie. The children who figured out how to deceive the most quickly had the highest levels of both of these skills.”

How children interpret the morality of lying

A 2016 study examined the ways in which children interpret the morality of various types of deception – white lies, false confessions. The results showed that younger children tend to classify all types of lying as bad, while children ages 10 through 12 saw lying as a morally complicated act.

“The older they are, the more interested children are in the consequences of these actions,” said study coauthor Shanna Mary Williams. “They are also more able to start looking at the intentions behind the speech.”

There are many things in life that cannot be improved with greater effort. Sometimes, life requires that you step back.
Up Next
Technology & Innovation

Experts assess what would happen if the U.S. and North Korea go to war.