In a scathing indictment of the growing influence of money in the private school educational system—and therefore on education, opportunity, and social mobility in America—The Atlantic’s Caitlin Flanagan investigates the increasingly troublesome trend of parental involvement in their children’s schooling. She points out an anecdotal instance when, as a private school teacher, she butted heads with the same parents twice after giving their child the unforgivable grade of an A-.

One of those irate phone calls came in less than 10 minutes after handing said student their creative writing paper. This meant they left the classroom and bolted straight to the school’s pay phone to complain—this was the 1990s, after all. The parents immediately phoned the school. Back then, the school had her back; today, parents yield much more influence, often in the form of endowments.

Flanagan’s article highlights two important questions beyond the unyielding influence of money on education: How involved should parents be in their children’s education? And what is the emotional result of too much intervention on the child?

A new study, published in the Journal of Family Psychology, attempts to answer both of those questions. Led by Stanford Graduate School of Education Associate Professor Jelena Obradović, the study finds that while it’s important for parents to be involved, too much direction and influence can be counterproductive.

For this study, researchers watched videos of parental behavior around their kindergarten-age children. A total of 102 children, ages four to six, were brought into the Stanford lab by their primary caregivers. The children were tasked to clean up toys, learn new games, and discuss problems. The researchers timed the length of their interactions with caregivers, such as how much direction the parents gave them when trying to solve a novel puzzle.

The results were clear.

“The children of parents who more often stepped in to provide instructions, corrections or suggestions or to ask questions – despite the children being appropriately on task – displayed more difficulty regulating their behavior and emotions at other times. These children also performed worse on tasks that measured delayed gratification and other executive functions, skills associated with impulse control and the ability to shift between competing demands for their attention.”

Given the laboratory conditions—parents knew they were being watched—Obradović and team noticed that parents did not yell or check their phones. How realistic this is for such a large cohort is difficult to gauge. The team was looking for “parental over-engagement,” the tendency for parents to intervene too often and not allow their children to figure things out for themselves. 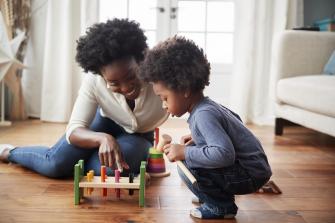 Of course, helping children is important as well. The team notes that aiding a child while they work on a new puzzle helps with cognitive development and independence. Striking a balance between lending a hand and letting the child struggle is important. As Obradović states, “there is a lot of variability within those averages, and our goal was to discover more subtle differences among parents who are generally doing fine.”

This research is especially pertinent during the pandemic as parents and children are interacting more than ever. The overall message: if you’re going to fly a helicopter, only descend when necessary.

This advice is critical for an educational system that, as Flanagan points out, is skewed to favor children from wealthy families. One startling statistic: only half of the public-school students in California are at grade reading levels; the numbers for math are even worse. As she writes, “Shouldn’t the schools that serve poor children be the very best schools we have?”

Extrapolating from that idea, we can ask the same of all parents: shouldn’t we work toward supporting children in the very best manner possible? Be it through influence or attention, it seems that too much of anything is usually counterproductive. Kids need to learn on their own terms, too.

Tags
childreneducationlearningparentingpersonal growthpsychologySmart Skills
In this article
childreneducationlearningparentingpersonal growthpsychologySmart Skills
Related
Neuropsych
Why is a Starbucks loyalty rewards program making customers so angry?
The rewards price to get a free cup of hot coffee at Starbucks is going up.
3 game theory tactics, explained
How to maximize wins and minimize losses, explained by four experts on game theory.
▸
7 min
—
with
Kevin Zollman
Sponsored
What childhood “money story” is shaping your financial behaviors?
Here are the signs that you inherited “money anxiety” from your parents.
Neuropsych
The most common source of awe might surprise you
It’s us.
How to fix your money trauma
Do you remember feeling “money shame” for the first time?
▸
7 min
—
with
Dr. Brad Klontz
Up Next
The Present
Nature-based Solutions (NbS) won’t save the planet
Their success is based on us adopting a plant-based diet, too.