If you’ve taken to the United States streets anytime lately, you may have noticed that most public school buses are a very particular shade of yellow. That shade is called National School Bus Glossy Yellow in Canada and the US, and it was specially designed by Dr. Frank Cyr. He was in charge of developing standards for the school bus. While there was no standard prior to this, many wanted something eye-catching so that every driver knew what vehicles hosted dozens of children on their way to learn. So, in 1939, after a long-awaited conference, they chose yellow.

Yellow is easy to see in the dim lights of early morning or late evening, and because it’s seen across both the green and red cones in the eye, it pops in our vision faster than other colors. It’s easier to notice even out of the corner of the eye, and stands out against the fog on a rainy day. What’s more, while the majority of those who are color blind have trouble distinguishing red from green, they can still see yellow just fine. The eye-popping color is just one of the reasons that school buses are one of the safest vehicles to travel in. Amanda Dumas-Hernandez, a Professor of Color Theory, agrees:

“Studies have proven that yellow is more visible on a spectral scale. It moves to the foreground while darker colors move to the back. Something yellow appears optically speaking heavier and larger than a darker shape the same size.”

It makes sense that yellow taxi cabs are safer than the blue ones. According to PNAS.org, blue and yellow cabs have the same rates of fare and spend the same amount of money a month to keep their medallions, so neither set of drivers are more motivated to drive safer. It isn’t like Uber, where drivers are rated by the very customers they drive around. Furthermore, the drivers tend to drive at similar speeds, so the color of the cabs isn’t attracting certain driver personalities. It is mostly linked to the color of the cab.

When Dumas-Hernandez learned that blue taxis got in 9% more accidents than a yellow taxi, she was surprised. “I thought it would be more,” she said. 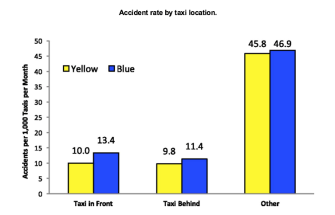 The long-standing association of yellow being the color of cabs means many people purchase cars that are specifically not yellow, because of the connection, but they will purchase blue cars. People are more careful around the yellow vehicle for the same reason they are careful around the school bus: they know what the color means.

Blue cars are similar to the color of fog on a rainy day, or the water under a bridge, so because of their lack of distinction, they are more likely to be hit. Blue cabs have approximately six accidents more than their yellow siblings for every one thousand accidents. Yellow cabs are less likely to be hit from behind, whether at day or at night, than blue ones. The color blue blends in with the dark while driving at night, meaning the already troubling act of facing on-coming headlights while your eyes are dilated is more difficult when a blue car is hiding along the road.

These findings may prompt introspection and the headquarters of ride-sharing apps like Uber and Lyft, and will push car buyers to consider color not just as a stylistic afterthought, but as a very low-tech but effective safety mechanism that could keep them and their passengers safer. The most immediate application of this research however will be helping people on the street make an easy choice when faced with two competing taxi companies.

Of course, this is all a short-term worry: we won’t be at the mercy human error for much longer.

Tags
accidentblue taxiscabscolorcrashNew York Citysafetystudytaxiuberyellow taxis
In this article
accidentblue taxiscabscolorcrashNew York Citysafetystudytaxiuberyellow taxis
Related
Strange Maps
Turn any place on earth into a New York street corner
ExtendNY stretches the Big Apple’s gridiron all across the globe – with some bizarre effects
Hard Science
A brand-new blue may be the most eye-popping blue yet
Meet a spectacular new blue—the first inorganic new blue in some time.
Strange Maps
Actually, New York is half socialist already
1895 map of New York City shows ‘concrete socialism’ in red, ‘private enterprises’ in white.
Neuropsych
Colors evoke similar emotions around the world, survey finds
Certain colors are globally linked to certain feelings, the study reveals.
The Present
Receiving your salary in cryptocurrency is now a thing
Your next payday could be all digital.
Up Next
Health
We’ve “Outsmarted” Nature’s Cycles—And It’s Disrupting Our Mental Health
A “new” field of medicine called chronotherapy demonstrates that following nature’s cycles, as our ancestors did, is integral to proper biological and cognitive function.