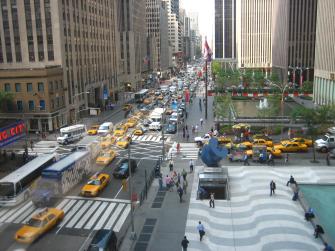 Sixth Avenue in midtown Manhattan. Add a few zeroes to the address, and it could be yours. Credit: Jeremy Keith, CC BY-SA 2.0

Can’t afford to live in New York? Yes, you can, and it won’t even cost you a penny. In fact, you don’t even have to move there. The Manhattan gridiron will come to you instead!

New York, but from the comfort of your own home

A nifty website called ExtendNY has rolled out the iconic street grid across the entire planet. You can now enjoy a real New York address at the corner of Such-and-such Street and This-and-that Avenue from the comfort of your own home.

New York may no longer be the biggest city in the world – Tokyo snatched that title somewhere in the second half of the 20th century – but the Big Apple still has a better claim than most other cities to be the Capital of the World.

It’s a city built by immigrants, home to people of every persuasion and complexion, speaking languages from all across the globe. Countless screens reflect the city’s skyline, cityscape, and frenetic energy back to the rest of the world.

Even first-time visitors feel oddly at home between the familiar bridges, yellow cabs, and skyscrapers of Manhattan. Plenty of locally-set movies and series – in turn glitzy or gritty – have seen to that. 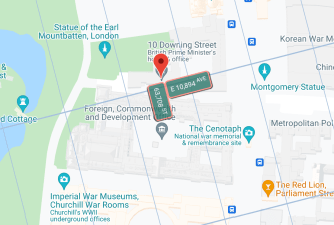 So it feels weirdly appropriate that ExtendNY, devised in 2011 by Harold Cooper, should allow New York to cover the entire planet and become not just the capital of the world, but a synonym for the world itself. New York is the first, last, and only planetary city the planet needs.

As a result, a lot of famous addresses the world over get an equally iconic New York one as well. The British Prime Minister, currently Boris Johnson, famously works out of Number 10 Downing Street in London. Ah yes, but that’s also on the corner of 63,708th Street and E 10,894th Avenue in New York.

His opposite number in Germany, Chancellor Angela Merkel, resides in the Bundeskanzleramt, overlooking the river Spree in Berlin. Or, when she daydreams of a slightly different life: the corner of 75,490th Street and E 11,126 Avenue in New York.

A new meaning to the Upper East Side 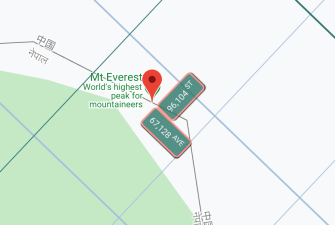 Can’t get away from New York. Even the top of Mount Everest is a street corner in the Big Apple. Credit: ExtendNY

Even natural features don’t escape global New York. The top of Mount Everest, on the border of China and Nepal? The corner of 96,104th Street and 67,128th Avenue. The actual North Pole? The map looks a bit funny, but the address is credible enough: the corner of 58,725th Street and 12,993 Avenue.

Similarly, the Eiffel Tower, the Ka’aba in Mecca, or your own place – all are now distant suburbs of NYC.

Uzbekistan: the nexus of the universe 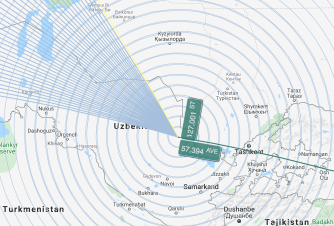 The weirdest bit of global New York is a place in Uzbekistan, where a street reduced to a single point intersects with all the avenues. Credit: ExtendNY

Because the grid is rectangular and the earth is not, there are a few points where Global New York runs into bizarro territory. In remotest Uzbekistan, ExtendNY’s gridiron arrives at a strange point, where the succession of streets have condensed into one that consists only of a single point – 127,001st Street – which intersects with all of Global New York’s Avenues. That mind-bending street corner is mirrored by a similar opposite in the South Pacific. As Kramer suggested, this could be the nexus of the universe — in Global New York, anyway.

Although Manhattan’s grid may strike us as thoroughly modern, gridded cities are by no means a recent invention. In French, a grid plan is called a plan hippodamien, after the ancient Greek architect Hippodamus of Miletus (5th century BC), a.k.a. the ‘father of European urban planning’.

The loneliness of Stuyvesant Street

However, like most cities in the Old World, the oldest ones in the New World grew up unplanned. In New Amsterdam, which occupied the southern tip of Manhattan, the streets followed old native trails, cow paths, and property lines, and generally the lay of the land.

Stuyvesant Street is a poignant and lonely relic of one of several attempts to impose order on that chaos. Sitting awkwardly between 2nd and 3rd Avenues, it is one of the very few streets in Manhattan to be aligned almost perfectly east to west.

In the late 18th century, the City commissioned Casimir Goerck to subdivide its Common Lands, in the middle of Manhattan, into sellable lots. Goerck’s name is now largely forgotten, quite literally. The small street in the Lower East Side that once carried his name was rebranded Baruch Place in 1933. But his plan, in the words of historian Gerard Koeppel, is “modern Manhattan’s Rosetta Stone.”

Goerck oriented streets 29 degrees east of due north, in order to align with the shape of the island itself, and devised a standard of five-acre blocks, two features which would come back in the famous Commissioners’ Plan of 1811. Goerck’s East, Middle and West Roads would become 4th, 5th, and 6th Avenues. In fact, the Commissioners’ Plan is essentially an expansion of Goerck’s grid laid out over the Common Lands.

The Plan proposed a city grid north of Lower Manhattan, from Houston Street (pronounced “house-ton” and not “hyoos-ton”, by the way; then appropriately called “North Street”) up to 155th Street – with two exceptions:

The Commission adopted Goerck’s gridiron as the most practical layout for the city, as “straight-sided and right-angled houses are the most cheap to build and the most convenient to live in.” In its predictability and repetition, the gridiron was a reflection of “republican” values such as plainness and uniformity, order, and equity.

In all, the Plan created about 2,000 city blocks. It took about 60 years for that grid to be filled in – but alterations were made, the biggest of which was the establishment of Central Park. Created in 1857 and completed in 1876, it runs from 59th up to 110th street, and from Fifth to Eight Avenues. It takes up 843 acres or just over 6 percent of the entire island of Manhattan.

From the 1860s onward, the grid was essentially extended northward, despite the fact that the difficult terrain necessitated some alterations.

Broadway, which originally only went up to 10th Street, was eventually joined up with other roads north, until it reached Spuyten Duyvil at the top of Manhattan in 1899. Its angled intersections with the grid helped create some of New York’s most emblematic open spaces, including Times Square, Madison Square, and Union Square. 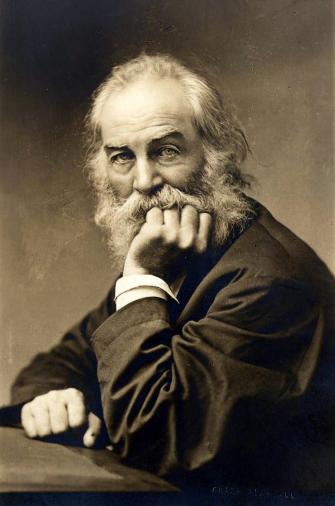 Walt Whitman (pictured here around 1870, about 50 years old) could wax lyrical about New York (see Strange Maps #842: Whitman Poem Transformed into a Map of Brooklyn), but wasn’t a fan of the grid. Credit: From Henry Bryan Binns: A Life of Walt Whitman (1902), public domain.

From the start, the plan had come in for harsh criticism. In more recent times, it’s been praised as visionary. Here are some put-downs by famous voices:

And here is some of the praise that has been lavished on the grid: 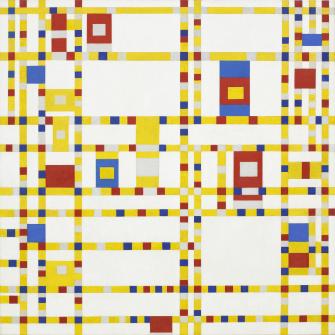 Piet Mondrian’s Broadway Boogie Woogie (1942-43) is “an optical vibration that jumps from intersection to intersection like traffic on the streets of New York.”Credit: public domain; the picture is part of the collection of the Museum of Modern Art (MoMA) in New York.

It’s doubtful whether it was Barthes’ words that spurred Mr. Cooper to devise his web tool; but thanks to ExtendNY, every place on earth is now a poetic extension of the capital of the world.

For another example of Manhattan’s global appeal, check out Haussmanhattan, a visual project by architect/photographer Luis Fernandes that mashes up the early 20th-century architectures of New York and Paris, after the latter’s renovation by Georges-Eugène Haussmann. 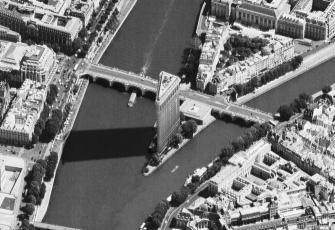 Manhattan’s Flatiron Building fits in well at the pointier end of the Île de la Cité at the center of Paris. Credit: Haussmanhattan, by Luis Fernandes.

Searching for truth in unorthodox ways can be a valuable exercise. But Anatoly Fomenko’s alternate world history is just plain weird.
Up Next
Design Thinking

Want to tap into the power of simplicity? You must first define.

People admire complexity. Many attribute it to the work of superior minds, those with the skills or intelligence to wrangle challenging ideas into a workable—if not always comprehensible—whole. This esteem […]