Every technological advance has detrimental effects. Two in particular have become relevant when contemplating a variety of ailments, from cancer and heart attacks to depression and mental illness: the light bulb and airplane. Though the benefits of both are innumerable, growing research on circadian rhythms is forcing us to question our habits as emerging therapeutic interventions are being used to combat the unexpected ravages of constant artificial light and the reality of time zones.

Chronobiology is the study of cycles. All life depends on biological clocks; animals and plants adapt to periods of light and dark. In our triumph over nature’s cycles, humans have disrupted the rhythms of biological functioning, which may be at the root of many physiological and cognitive diseases. Researchers now wonder if getting back on track with life as nature intended is a silver bullet or if the simple technology of an eye mask and paying closer attention to your sleep cycles are overrated.

The three major circadian cycles are diurnal, representing organisms active during the day, nocturnal, nighttime creatures, and crepuscular, those animals that eat and frolic at dawn and dusk. These cycles are critical in eating, mating, sleeping, migration, and cellular regeneration in animals. The field of chronobiology kicked off in 1960, borrowing from flora pioneers Jean-Jacques d’Ortous de Mairan and Carl Linnaeus and applying the concept to microbial and animal life. 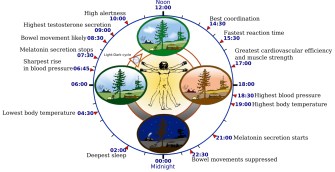 This diagram depicts the circadian patterns typical of someone who rises early in morning, eats lunch around noon, and sleeps at night (10p.m.). Data sourced from The Body Clock Guide to Better Health by Michael Smolensky and Lynne Lamberg.

More recently the circadian phenomenon has been used to study jet lag. One study at a psychiatric hospital near London’s Heathrow Airport discovered that patients who had traveled from the west showed an increase in mania, while those who traveled from the east suffered higher rates of depression. Years later an Italian psychiatrist noticed patients whose windows faced east were discharged sooner than those who were assigned west-facing rooms.

The combination of light and melatonin appears to be the culprit in symptoms of jet lag, which can also be applied to sleeping disorders (or to people who, out of habit or employment, develop unnatural sleeping patterns). Your brain begins secreting melatonin a few hours before darkness, preparing you for rest. Disrupt that cycle and your body’s clock is thrown off, accompanied by a series of dangerous consequences.

One current intervention for depression is wake therapy, which has been shown to lower depression in those suffering from bipolar disorder and major depression. You wake up halfway through a normal sleep cycle, which changes your body temperature and cortisol levels. When combined with early morning light therapy and ‘sleep phase advance’ (going to bed five to six hours before your normal bedtime), you have ‘triple chronotherapy.’ The results have been positive:

In one study of 60 hospitalized patients with bipolar depression who were taking antidepressants or lithium, 70 percent of those who did not have a history of drug resistance improved rapidly with sleep deprivation and early morning light, and 57 percent remained well after nine months. Encouragingly, 44 percent of patients who had failed to respond to at least one trial of anti-depressants also improved.

Chronotherapy is a response to environmental detachment. Before alarm clocks and light bulbs the sun was dependable timetable. Just because we’ve created our own rhythms does not mean we’re healthier. In fact, the opposite is likely true. As science writer Jessa Gamble writes:

To be fully integrated with an ecosystem, an organism must cling to its niches, and one of those is a carefully carved-out temporal niche.

She goes on to note that different species can occupy the same space if their internal clocks are wound differently. While our modern environment provides constant access to “food, warmth, and light … that desynchrony is causing all manner of problems … just about everything our body does – from metabolism and DNA repair to immune responses and cognition – is under circadian control.” 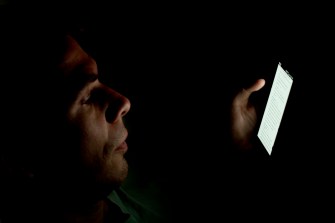 Our brain’s suprachaistmatic nucleus in the hypothalamus is our body’s master clock, while each organ maintains its own rhythm. Photoreceptors in our retinas inform the clocks as to which alarm should be going off and which remains on snooze. The light we need to accomplish this is daylight. Not all internal clocks are light-dependent—Gamble writes that our liver and pancreas clocks are reset when eating late at night—but when we sleep and frolic do matter to our overall health.

Microbiomes and diseases also have their own rhythm, which is why Gamble writes that paying attention to our circadian rhythm might play an important role in combating disease:

We can pinpoint the timing of our interventions for just the moment when our pathogens are most vulnerable. No longer bathing the body in drugs throughout the day, ‘chronotherapy’ acts like a guided missile to tackle disease at its most active phase.

Cancerous tumors, she continues, are rhythmic as well. Research in France found that doubling the dose of three cytotoxic drugs for patients with advanced colorectal cancer was safe and effective when following a specific timetable that honors our internal rhythms.

Gamble foresees a future with ‘chrono’ attached to most every form of medicine. This fits squarely into the emerging paradigm of personalized medicine. As technology advances and our phone offers reliable diagnoses, perhaps the day will come when we log on to find out our optimal sleep schedules—even though access to a window will often suffice.

Not to be overly optimistic. Susan Perry co-authored a book on chronotherapy in 1990. While she sees promise in these emerging breakthroughs, she has not seen that much of a forward march to the promises of this therapy. She warns against considering chronotherapy a cure-all:

As with so much medical research, translating those breakthroughs into universally accepted and practical clinical applications has turned out to be much more complicated than originally believed.

In a time long before antibiotics, vaccines, and basic hygiene, humans lived by the rhythms of the sun. While many ancient practices were rightly left behind, following the sun’s arc remains an essential component of our health. This reminds us that some breakthroughs are quite old. We just got too excited by the shiny toys we created to realize their dangers.

Mycobacterium leprae, the bacteria that cause leprosy, have the surprising ability to grow and reverse aging in armadillo livers.
Up Next
Sponsored

Why Hopefulness Is a Greater Predictor of Academic Success than Intelligence

A growing body of scientific investigation now supports the conclusion that being hopeful has a distinctly positive effect on academic performance.