People associate colors with emotions (green for envy, blue for sadness, etc). We see this portrayed in the media, in marketing, even in the clothes we choose to wear. A detailed survey of over 4,500 participants from 30 nations (spanning over 6 continents) explains that people from all over the world often associate the same feelings with the same colors.

“No similar study of this scope has ever been carried out,” said Dr. Daniel Oberfeld-Twistel, member of the participating team at Johannes Gutenberg University Mainz (JGU). “It allowed us to obtain a comprehensive overview and establish that color-emotion associations are surprisingly similar around the world.”

Color Psychology – How Colors Influence Your Choices and Feelingswww.youtube.com

There is a very likely chance you’ve even been “fooled” by color marketing in the past, or you’ve chosen one product over another subconsciously due to colors that were designed to influence your emotions.

Your favorite color says a lot about your personality.

Various studies and experiments across multiple years (2010, 2014, 2015, and more recently in 2019) have given us more insight into the link between your personality and your favorite color.

Red, for example, is considered a bold color and is associated with feelings such as excitement, passion, anger, danger, energy, and love. The personality traits of this color might be someone who is bold, a little impulsive, and who loves adventure.

Orange, on the other hand, is considered representative of creativity, happiness, and freedom. The personality traits of this color can be fun, playful, cheerful, nurturing, and productive. Read more about color psychology and personalities here. 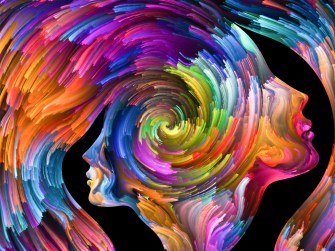 Certain colors are globally ties to certain emotions, the study reveals.Image by agsandrew on Shutterstock

In this particular survey, participants were asked to fill out an online questionnaire which involved assigning 20 emotions to 12 different color terms. They were also asked to specify the intensity with which they associated the color term with the emotion.

The results of this study showed a few definite correlations between colors and emotions throughout the globe. Red, for example, is the only color that is strongly associated with both negative (anger) and positive (love) feelings. Brown, on the other end of the spectrum, is the color that triggers the fewest emotions globally.

Yellow is more associated with joy, specifically in countries that see less sunshine. Meanwhile, its association with joy is weaker in areas that have greater exposure to sunshine.

According to Dr. Oberfeld-Twistel, it is difficult to say exactly what the causes for global similarities and differences are. “There is a range of possible influencing factors: language, culture, religion, climate, the history of human development, the human perceptual system.”

Time and again, studies have found a connection between authoritarian ideals and meaning in life — a notion backed up by historical documents.
Up Next
Smart Skills

Handwriting has been shown to have more benefits for memory than typing.