Everyone loves free. It’s hard to find any marketing pitch today without the word in it. There’s always someone ready to give up the goods at no cost to you. Free has become such a bargain that the idea of paying for anything anymore seems antiquated and ludicrous.

Of course, nothing is truly free.

So the question: What are we actually paying with?

That’s the argument that George Gilder makes in his nineteenth book, Life After Google: The Fall of Big Data and the Rise of the Blockchain Economy. Gilder’s accolades are many. Thanks to his plea for supply-side economics and capitalism, he was Ronald Reagan’s most quoted living author. While his ideas about religion are questionable—he supports intelligent design—he’s also, somewhat ironically, been a leading technology thinker. In 1990, for example, he predicted computers would make television obsolete.

Around that time, the idea of a network of linked computers was just starting to emerge in the public consciousness. The revolution promised freedom, but it hasn’t panned out that way. A handful of tech companies now dominate two economies: monetary, sure, but also attention. Apple, at least, makes a physical product, something Gilder supports. Google, however, relies on the concept of “free” to sell its advertising model. And Gilder thinks this will be its undoing.

Life After Google: The Fall of Big Data and the Rise of the Blockchain Economy

Most alarmingly, in the race for attention (and hence, time), leading technology companies have sacrificed security, what Gilder calls “the most crucial part of any system.” If security isn’t considered from the outset, the architecture must be replaced. Because the promise of the early internet has turned into the exact opposite, companies like Google are not going to replace the infrastructure they’ve spent billions creating. Their fortresses have become prisons.

The concentration of data in walled gardens increases the cost of security. The industry sought safety in centralization. But centralization is not safe.

Decentralization, he continues, is much safer than having all your data tied up in one company’s servers. Centralization creates conformity. In Skin in the Game, Lebanese-American risk analyst and author Nassim Nicholas Taleb discusses a previous powerhouse of conformity, IBM, which required its employees to wear white shirts and dark blue suits. Such uniform mentality served the employees well inside of the system. When Microsoft forced IBM to lay off many “lifers” as the internet emerged, however, “these people couldn’t find a job elsewhere; they were of no use to anyone outside of IBM.”

We are all part of Google’s world, whenever we use Gmail or any of its many free applications. Yet someone—us—is paying for those services. Us. One of Gilder’s ten rules of the cryptocosm (his term for the coming digital system run by blockchain) is that “time is the final measure of cost.” 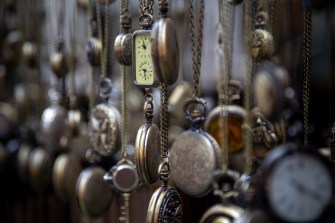 That time is divided in many ways. Try to navigate the current world of digital journalism and you’ll quickly find frustration in the load time (most fees associated with going online on your phone are thanks to ads), auto-play videos, pop-up banners, and ads that you can’t shake no matter how diligently you scroll. Visit USA Today’s site and you’ll be met with an assault of all of these blockers to content and more. Actually, don’t visit that site, unless you want to discover a ring of hell Dante could not have foreseen. Or, as Gilder puts it,

Google’s Free World is a way of brazenly defying the centrality of time in economics and reaching beyond the wallets of its customers to seize their time.

And time is all we really have. If you want real “f*** you money,” Taleb writes, then be broke. You might not feel rich, but you’ll have all the time in the world—the true measure of freedom. While this sounds counterintuitive, that’s likely because our intuition, which has been drilled into us ad nauseam for a century, is that money frees us so we have more time. Taleb argues the opposite: money steals time as we become dependent on acquiring the money that takes up all of our time.

Which is the model Google relies on. Without a tangible product all they can offer is distraction. No one at the end of their life says, “I didn’t spend enough time on my phone.” Yet that’s the expensive cost of free, and we’re all paying it handsomely.

Dream hacking: Is this the dystopian future of advertising?

A team of scientists has warned that marketers seek to advertise in our dreams. Will our sleep be commercialized against our wishes?
Leadership

Why our instincts about innovation and change work against us

Many of the furniture giant’s products are named after Swedish locations. Not everyone is happy about that.
The Learning Curve

The Chegg cheating scandal reveals a critical need to rethink the student experience in post-COVID education.
Up Next
Starts With A Bang

The Sun Will Someday Die, And That’s Why You’re Alive

Human beings can exist on our world today because of the ingredients our planet was born with and because of the light and heat put out by our Sun. After […]