Imagine if you will a terrorist cell getting their hands on a drone, or a number of them, and some explosives. No, this is not an episode of 24. The military calls drones unmanned aerial systems (UAS), and they are worried about them. While planes and helicopters are large enough to recognize easily on radar, drones, being smaller, can be mistaken for birds.

Our air traffic control system successfully monitors thousands of aircraft per day. Yet, no such system for monitoring drones exists, yet. And UAVs are not required to report their location, as aircraft does. Even so, drones are quickly becoming ubiquitous in our society, making it less likely for us to know if the flier has ill intentions, until it’s too late. A group of no-goodniks could easily fly an explosive laden drone, or half a dozen of them, into an office building, a park, city square, or even a stadium full of spectators. 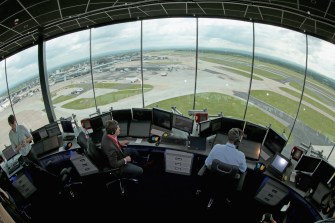 The FAA monitors aircraft, but has no way to monitor drones.

That’s why the Pentagon’s R&D wing has been tapped to create a system to protect soldiers on the battlefield and civilians at home, from this ever-growing threat. The Defense Advanced Research Projects Agency (DARPA), the people who brought you the internet and many other startling innovations, have an idea on how to stop “UAS-enabled terrorist threats.” What DARPA is doing is requesting proposals for something they are calling an “aerial dragnet.”

The agency announced their request on the website FedBizOpps. In a press release, DARPA officials said that, “As off-the-shelf UAS become less expensive, easier to fly, and more adaptable for terrorist or military purposes, U.S. forces will increasingly be challenged by the need to quickly detect and identify such craft.” They added, “Especially in urban areas, where sight lines are limited and many objects may be moving at similar speeds.” DARPA is now requesting proposals from tech companies large and small which will allow “…persistent, wide-area surveillance of all UAS operating below 1,000 feet in a large city.” 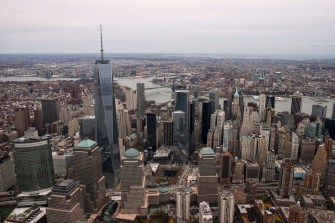 The Pentagon wants to employ a drone monitoring system to be used in urban areas.

It’s easy to track large aircraft, even those that are fast-moving. Lots of apps and websites do so. Slow, small, and low-flying ones are a lot trickier. Not only that, but the need is greater. Drones are becoming more common on battlefields, particularly among US forces. Other countries however are starting to produce them, for surveillance and combat purposes. But the real fear is non-state actors such as Al Qaeda or ISIS getting their hands on them and wreaking havoc.

DARPA is looking for a kind of “super drone” that can hover above an area, such as a city or a battlefield, and monitor for any suspicious UAS’s. It may employ a system of smaller drones. The agency pictures the system working as “a network of surveillance nodes, each providing coverage of a neighborhood-sized urban area.” This system would be able to track a drone over an urban center precisely and accurately, in real time.

It will take time to develop such a system. Today, UAVs can be tracked in large, open areas. But the drone needs to be in the system’s line of sight. When skyscrapers and other buildings around, and pigeons and other objects fluttering about, sight lines are limited, and tracking becomes difficult. This project is expected to take over three years to complete.

After that, the Pentagon will decide whether or not to take any of the proposed models and implement them, at home and abroad. No word yet on what strategies would be employed to neutralize a menacing drone, once detected. There are several ways to take out a UAV, including a rifle which sends radio signals, blocking commands from its controller, to specially trained eagles, which are now being used in the Netherlands. 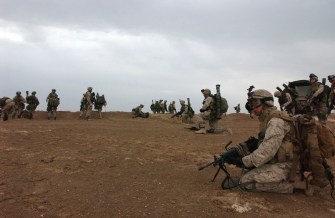 A drone monitoring system would first be employed on the battlefield.

DARPA program manager Jeff Krolik is one of the officials assigned to this enterprise. He is also associated with a similar project, known as “upward falling payloads.” Here, drones are placed within sealed cases deep down on the ocean floor. These will be placed in strategic locations across the globe. If trouble strikes in a particular area, one of these drones would be activated, remotely. It would “fall” upward, take flight, and use its payload of sensors and instruments to report on what is occurring.

At first, the dragnet system would be used mainly on the battlefield to protect troops. But according to Krolik it “could ultimately find civilian application to help protect US metropolitan areas.” NASA is also developing its own drone monitoring system, independent of this project.

One question few seem to be posing is whether having one’s city monitored by an eye in the sky at all times might make the citizenry nervous. Is it a 1984 scenario, rationalized as protection from terrorism, or a way of keeping us safe? The more measures such as this that are required, the more pressing the argument of where to draw the line between safety and liberty becomes.

To see a plan Tokyo police have come up with, click here:

The attack on the Capitol forces us to confront an existential question about privacy.
Strange Maps

This company scraped social media to feed its AI facial recognition tool. Is that legal?

If its claims are true, Clearview AI has quietly blown right past privacy norms to become the nightmare many have been fearing.
The Present

Does the President get to decide when to ignore the law?
▸
6 min
—
with
James Stoner
Up Next
Technology & Innovation

So the Russians Just Arrested a Robot at a Rally