Maybe it was a stunt to get attention, but the robot’s behavior was provocative, at least for Russia. Getting attention is what Promobot was built for, after all. On this day it was canvassing participants at a political rally on behalf of a candidate for the Russian parliament, Valery Kalachev. It had been hired — leased? — by the Kalachev campaign to identify issues of concern to Kalachev’s constituents.

Police requested Promobot quit what it was doing, to be met with the perfect, “who me?” blank stare effected by many a guilty perp.

Promobot’s manufacturer reported, ““Police asked to remove the robot away from the crowded area, and even tried to handcuff him. According to eyewitnesses, the robot did not put up any resistance.” Well, that’s nice.

Promobot is billed as a “robot promoter,” which makes one wonder who it was exactly that tipped off the constabulary. According to his Russian designers, “Promobot attract maximum audience of the advertised product, and also excludes people from this process, because it works independently. Suffice it to start the robot, and then the robot will independently recognize people, to offer them to promote products and advise on predetermined topics.” 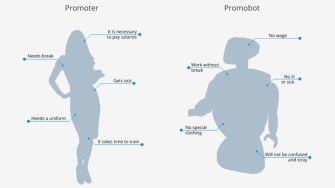 How Promobot is better than a human. (PROMOBOT)

Promobot’s proven before that it’s good at attracting press. Last spring a V2 model seemed to have escaped its Perm, Russia factory and gone out into traffic where It caused quite the ruckus, not least because of its built-in loud loudspeakers. Did Promobot really make a break for it, or was this staged, too? The company did offer a very detailed narrative of the event on its blog. Hm. 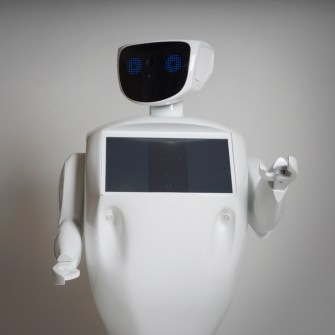 Whatever the deal is with Promobot, these, its antics raise some interesting topics.

Robots will be operating among us soon. They already are, really, not always successfully. Is this a good or a bad thing? Caltech recently published a study exploring the ability of robots to function in a crowd, concluding that a human-cooperation module is a must in its programming.

But what if an unexpected event occurs in that crowd, and requires the robot to choose one human’s needs over another? This thorny issue is already being considered with self-driving cars.

And while the Promobot people seem to be showing off their product as mostly mindless puppets, it seems self-evident that when robots do attain something even close to sentience, we’re going to need a clear set of rights for them. If indeed it needs to be a different set than those enjoyed by human beings. How about robots who know how to replicate or reproduce? Should they be allowed to if they “want” to?

Meanwhile, back in Russia, Promobot is ramping up to the launch of Promobot 3.0, assuring the world, “The developers promise to surprise.” And of course, Henry the Horse dances a waltz.

The researchers and patients are excited to see if color vision will develop over time.
Up Next
Technology & Innovation

Street Vendor to Sell His Michelin Star Recipe for $2 Million

It’s the cheapest Michelin-Star dish in the world; a plate of soya sauce chicken from this Singaporean street hawker will set you back $1.80. But the secret recipe is for sale, and it’s a little steeper.