Andrea Breanna is the founder and CEO of RebelMouse. RebelMouse is a powerful CMS platform that has built two of the biggest new media companies to date — The Dodo[…]
Go to Profile 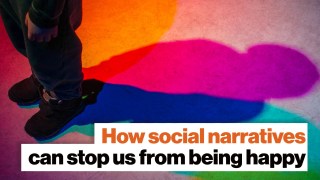 Coming out trans: How social narratives can stop us from being happy

Many of us don't fit perfectly into existing social narratives. But we can still find our own way.
▸
6 min
—
with
Andrea Breanna

ANDREA BREANNA: I'm obviously an extreme. What I found when I came out of the closet as trans because I will say, I always knew I was trans. And I think that's not true of all trans people. It's not what defines us. But it is true of a lot of us. So in part, I think I lost, I sometimes feel like many of us do a lost childhood that I didn't get to fully be myself. But on the other hand, I also feel like I was able to frequently be myself because I was never in the closet to myself. And it was something that I always found a little space, literally a closet, sometimes, to be myself. Growing up in the Valley, and my dad started a software company, I learned to code. And the first reason I learned to code, the first thing I did with it, was create I wrote a little thing of code to password protect a file. It was like really early days.

My dad had bought a computer and it was assembled. And it was the first private space that I had. With sisters and cousins and my mom, as nosy as we all knew she was, there was no way I could have a diary. But the first place I could write was this space that I knew like no one would read but me. And that, for me yeah, I think a lot of trans people work in tech, because as kids it was a place we could be ourselves. But what I think I found when I came out of the closet, the biggest fear, that once my wife accepted me instead of wanted a divorce and she understood I didn't, I actually, I've always been attracted to girls. And that was really hard on the whole gender orientation and sexual orientation. And like, if I could whisper back to myself as a teenager, you can be a girl and like girls. But it was also confusing through all of this. And for her, there's no narratives. And I think if you accept, more than anything I think, I think I've been thinking about this a lot.

And I think that there is a when we are living in a paradigm, which is our current one, where we are trying to find the role already existing that we fit into, I think when we try to exist in modern times in that paradigm, it causes a tremendous stress and anxiety. Because as humans, it turns out, that very few of us fit so perfectly. I think coming out as trans, what has been beautiful for me is to see that while I get to meet a lot of people who identify as trans, I meet, overwhelmingly people who identify with trans people. With this sense of not fitting into those things and I see, with four kids, and all of them little, from 12 to 1 and 1/2, "Are you going to grow up to be a fireman or you can be the president. Don't forget to dream big!" And the biggest dream we can put out there for them is the president. But they ask from middle school for kids to think about their specialty. And it's like, how could you know? You don't know. You won't I think the smartest people don't know what their thing is when they're 70.

But the biggest dream should be, you're going to invent something we don't know yet. And when you look at humanity, everyone who's alive picks from the existing narrative roles that we've been given. And they used to be terribly primitive, but they were shockingly primitive from where I think we can get to quite rapidly if we accept this different paradigm, where the goal is to create a new role. It's to build a new narrative, that we have hundreds of years of expanding narratives before we've exhausted what it could mean to be human. People don't talk about happiness very often. And happiness is the most important thing in our lives. It's the most valuable metric of our lives is how happy we were. Everything else if noise.

I went to Costa Rica when I was younger. And we met this it was deep in the jungle, in Osa Peninsula we met this shaman who was really amazing. And he knew the jungle and all the bird calls, really incredible person. And he and I very much connected. And a little moment that even 15 or 20 years, how long it's been, always sticks with me, is he said, "Listen, see this flower?" and it was a gorgeous complicated jungle flower He says, "If you love it, then you'll understand. Because you'll pay attention and [INAUDIBLE]. And if you hate it, then you'll only have that thin little photo of it. You won't ever understand it." So when you think of your boxes, it's that simple. What do you love to do? What made you happy? And those are the things that your soul are fighting to find again.

Depression is different for everyone. Here’s what it’s like for me.