Unless you’ve recently returned from a hermitage atop the sacred mountain, you’ve probably noticed that mindfulness has become a big deal. As measured by Google searches, interest in the East Asian tradition has risen significantly in the last two decades, and more Americans are practicing either yoga or meditation. CEOs and celebrities plug it as key to their health, success, and happiness, while companies have adopted it to bolster innovation and productivity.

With that groundswell of attention has come a deluge of influencers, self-help gurus, and wellness experts—all hawking their wares and claims in hopes of slicing off a portion of a soon-to-be $9 billion industry. Some of the more breathless promises allege mindfulness can unlock your full potential, make your memory foolproof, make you better than ordinary, and even bend reality to your desires. And if that seems like too much work, you can fast track your way to higher consciousness with some chakra tea or a slathering of mindful mayo on your banh mi sandwich.

It all has an air of chic diets and insane exercise routines, and the noise of the marketplace makes it difficult to separate the fad from the function—a necessary step for anyone hoping to incorporate mindfulness into their lives safely and sustainably. 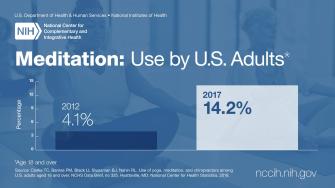 A bar graph showing the increase in U.S. adults who took up meditation between 2012–2017.(Source: NCCIH)

As a spiritual practice, mindfulness had made the journey westward through teachers such as Ram Dass and Thich Nhat Hanh, but its first dalliance with science came through Jon Kabat-Zinn. As an MIT student, Kabat-Zinn took an interest in meditation and incorporated it into his biology studies. After graduating, he founded the Center for Mindfulness and began researching a secular form of the practice called mindfulness-based stress reduction (MBSR), which Kabat-Zinn developed himself.

“When I started […], there was virtually no science of mindfulness whatsoever,” Kabat-Zinn said during a Big Think+ interview. “Part of my original aim was to use the clinic as a kind of pilot to see whether we could catch people falling through the cracks of the healthcare system and challenge them to do something for themselves that no one else on the planet could possibly do for them, including their physicians: to move in a direction of greater well-being and healing.”

Kabat-Zinn’s studies signed up participants for an intensive eight-week MBSR program. The workshop included formal instruction in mindfulness techniques, group meetings, and homework between sessions. It aimed to help participants develop a non-judgmental awareness of the present moment, while Kabat-Zinn analyzed how that affected their mental and physical wellness. And this pilot program showed promise.

Kabat-Zinn’s research (and later studies) found that mindfulness practitioners enjoyed less stress, anxiety, and depression. Further studies have since identified mindfulness as a potential tool for reducing chronic pain, lowering blood pressure, aiding insomnia, and lessening the body’s inflammatory response to stressors. Preliminary research has even suggested that mindfulness can make us less racially biased and lengthen our telomeres, a chromosomal region that stands as a biomarker of human aging.

“I don’t want to overstate the evidence because the entire field is in its infancy, but the vast majority of studies are suggesting that when you do something as simple as what looks from the outside like nothing, this is having profound effects,” Kabat-Zinn added.

But given promises of extraordinary bliss and god minds, others obviously lack Kabat-Zinn’s restraint for overstatement and over-selling. And here’s where the science bumps against the commercialized woo. While mindfulness effects are present in the data, they aren’t incredibly robust.

Similar results can be found across the scientific literature. Another meta-analysis found slightly larger but still moderate effect sizes. Still another—this one looking at mindfulness-based therapy—found a moderate effect size but not one larger than other therapies or pharmacological treatments. As for individual studies, these can be limited in their predictive value. That study showing mindfulness reduced racial bias, for example, had only 72 participants—all of them midwest college students.

Mindfulness research also faces methodological concerns—such as an over-reliance on self-reporting questionnaires—and even struggles with basic terms—there is no universally accepted definition of mindfulness and few studies today follow Kabat-Zinn’s strict MBSR program. All of this has led researchers to take a hopeful yet cautionary stance on mindfulness and its benefits.

Unfortunately, these scientific findings have grown with each telling on social media, talk shows, and self-help books. In the wilds of our capitalist culture—freed from the pruning effects of science’s checks and balances—the practice is no longer a proper stress management tool but the “ultimate stress-reliever.” It’s no longer a complement to traditional therapies but a more potent analgesic than painkillers. And, in the words of Arianna Huffington, founder of the Huffington Post, it has become a literal “matter of life and death.”

None of which is true. Yet, such proclamations still lead those who follow the fashion to happily part with hundreds of dollars on chimes, Lululemon yoga pants, and meditation app subscriptions.

“It’s important we understand the risks and don’t overstate the potential benefits until they’re robustly substantiated,” writes Jason Linder, PsyD, at Psychology Today. “Practicing mindfulness when you’re not mentally ready, or when you actually need a nap, to eat, a massage, to work, or an important conversation with a loved one can clearly create more difficulties than it’s meant to mitigate.”

As Linder says, mindfulness is just one method available to us and not the right one for every occasion. But pop-culture prescriptions written as a cure-all can have dire consequences. Emboldened by stories of “I did it and so can you,” some may forgo traditional therapies and medicines in favor of mindfulness—a kind of mental self-medication.

This can be harmful. In some people, mindfulness practices have been shown to amplify certain psychiatric problems associated with worry and depression. Those who go it alone, without the supervision of a qualified psychiatrist or teacher, may blame themselves for their failures. After all, everyone seems to be mastering it—just look at all those peaceful, smiling faces on the YouTube videos. It’s a false perception, yes. But if someone is already struggling with depression, that perception can compound their emotional slump.

Of course, this isn’t to say that mindfulness doesn’t work. Small-to-moderate effect sizes aren’t zero, and for many, mindfulness has proven a source of great ease and comfort. But if you go into mindfulness thinking you’ll become a mental Superman—that life’s difficulties will bounce harmlessly off your chest like bullets every which way—you’re in for a disappointment.

Life will continue to be life no matter how often you focus on the breath, and that includes all the stresses and challenges that were present before. What mindfulness can help you do is reduce the stress you carry and become more resilient to stressful events. That can add up to being happier overall.

How resilient? How much happier? As should be obvious by now, there is no magic number, but the experiences of journalist and mindfulness evangelist Dan Harris can give us an idea.

While reading the news on-air, Harris suffered a panic attack in front of 5 million people. As he told Big Think in an interview, the attack stemmed from his work-related depression and attempt to self-medicate with recreational drugs. Part of his treatment process was to take up meditation. It didn’t solve his substance abuse problem, nor did it purge the depression from his soul. It did, however, grant him a 10-percent bump in happiness, stress reduction, and joie de vivre.

“If you can get past the cultural baggage, though, what you’ll find is that meditation is simply exercise for your brain. It’s a proven technique for preventing the voice in your head from leading you around by the nose,” Harris writes in 10% Happier. “In my experience, meditation makes you 10% happier. That’s an absurdly unscientific estimate, of course. But still, not a bad return on investment.”

Not bad at all.

Our Big Think+ class “Paying Attention on Purpose” with Jon Kabat-Zinn will unlock key lessons for your mindfulness practice, both at work and in your everyday life.

Learn more about Big Think+ or request a demo for your organization today.

Tags
anxietydepressionhappinesshealthlearningmeditationmental healthmindfulnesspersonal growthpsychology
In this article
anxietydepressionhappinesshealthlearningmeditationmental healthmindfulnesspersonal growthpsychology
Related
Stoicism: How to turn your sadness into strength
Chloé Valdary shares the ancient Stoic principle that can defeat modern despair.
▸
7 min
—
with
Chloé Valdary
Sponsored
Want to boost your happiness? Buy experiences, not material possessions
Some experiences continue to pay dividends time and time again.
If money doesn’t buy happiness, you’re spending it wrong
These money experts say you can buy happiness. There are some red flags to look out for, though.
▸
7 min
—
with
Lindsay Bryan-Podvin
Thinking
“Give a f***, actually”: The surprising benefits of being grateful for things you dislike
Radical Emotional Acceptance calls on you to celebrate all of life’s emotions — even the negative ones.
Neuropsych
How you breathe affects your brain
Your breathing rhythm influences a wide range of behaviors, cognition, and emotion.
Up Next
Technology & Innovation
Big Tech and privacy: Apple flirts with the “dark side”
In the name of fighting horrific crimes, Apple threatens to open Pandora’s box.