Cheaper, more efficient batteries. That’s what Tesla says will allow it to offer a $25,000 electric car within the next three years. The announcements came at the company’s “Battery Day” event on Tuesday afternoon in Palo Alto, California.

“One of the things that troubles me the most is that we don’t yet have a truly affordable car, and that is something that we will make in the future,” Tesla CEO Elon Musk told a socially distanced audience, who were sitting in cars in a parking lot. “But in order to do that, we’ve got to get the cost of batteries down.”

How to cut costs? Tesla is working on a design update for its batteries, and the company plans to begin manufacturing them in-house. (Panasonic currently produces Tesla batteries.) A key design update is removing a tab within the battery that connects the cell to what it powers.

“You actually have a shorter path length [for the electron to travel] in a large tabless cell than you have in the smaller cell with tabs,” Musk said. “So even though the cell is bigger, it actually has more power.”

Tesla also plans to lower costs by using nickel instead of cobalt in its cathodes. The company said its new cathode design would reduce costs by about 75 percent, and also remove waste water from the manufacturing process.

What’s more, the international cobalt supply is limited, and most of it comes from the Democratic Republic of Congo, where adult and child miners are known to be exploited. 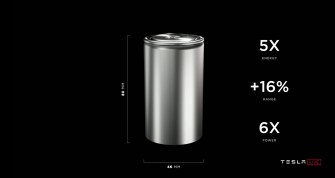 It’s unclear when Tesla will stop using cobalt, or when it will stop sourcing its batteries from Panasonic. But Tesla claims that its new battery design and manufacturing changes will allow it to cut the cost per kilowatt-hour in half. If Tesla can successfully scale up production, the company could hit its goal of $100 per kilowatt-hour sooner than expected.

Hitting that mark could usher in the electric-car revolution, considering $100 per kilowatt-hour is generally regarded as the threshold the industry needs to reach in order to make electric vehicles cost competitive with gas-powered cars.

A $25,000 electric car would also be Tesla’s cheapest offering by far. The company had previously promised a $35,000 car, but only offered one at that price for a limited time. Tesla’s website says its Model 3, its cheapest car, starts at about $39,000. 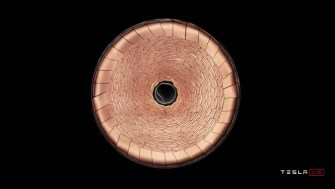 To be sure, Musk is known for promising big on his projects, but not always following through on the promised timetable. But despite having an “insanely hard” 2020, as Musk said, Tesla’s had a good past couple years.

Tags
batteriesbusinesscarsdriverless carselectric carselon muskinnovationsustainabilitytesla
In this article
batteriesbusinesscarsdriverless carselectric carselon muskinnovationsustainabilitytesla
Related
The Present
How California could save its rain instead of letting it drain into the ocean
Why can’t more rainwater be collected for the long, dry spring and summer when it’s needed?
Hard Science
Scientists use laser beam to divert lightning strikes
Laser-guided lightning systems could someday offer much greater protection than lightning rods.
The Future
Paper-thin solar cell can turn any surface into a power source
Some solar cells are so lightweight they can sit on a soap bubble.
The Past
How electricity stormed past steam and became the power of the future
The shift from steam to electricity was inevitable — but some foresaw it earlier than others.
The Past
What made Ada Lovelace so brilliant
Ada Lovelace’s skills with language, music, and needlepoint all contributed to her pioneering work in computing.
Up Next
The Present
Back to back excavations unearth two dozen Egyptian mummies
Well preserved coffins hint towards more discoveries in a famed necropolis.