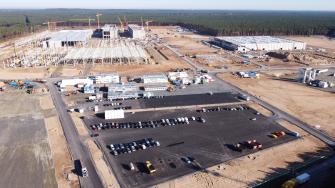 Say what you will about state-run economies, but they’re great at concentrating effort on a particular target. About a decade ago, Beijing directed huge resources towards its photovoltaic industry. Today, nine of the world’s 10 largest solar panel manufacturers are at least partly Chinese. China is similarly resolved to become the global leader in EVs, including EV battery production.

China’s dominance in this area is making many outside China nervous. In previous decades, OPEC had a similar stranglehold on producing the oil that makes cars run and factories hum. Then the organization had a political point to make and turned off the tap. During the oil crisis of the 1970s, oil prices skyrocketed and economies crashed.

Avoiding a 21st-century version of that scenario requires a strategy for EV battery self-sufficiency, and Europe has one. In 2018, the EU launched its Battery Action Plan, a concerted effort to increase its battery production capacity. Realizing they couldn’t beat China on price, the Europeans resolved that their batteries would be greener and more efficient.

Easier said than done. Setting up battery production is complex, expensive, and slow. And as the EU’s woefully slow vaccine rollout demonstrates, the organization’s strength-in-numbers argument doesn’t always work in its favor. Indeed, by 2020, only four of the dots on this map were up and running:

But in this case, slow and steady may win the race. At least two dozen battery plants are in the works across Europe (i.e. EU and its near abroad), and four of those should come online in 2021 alone, including Tesla’s plant near Berlin. Tesla, incidentally, coined the term “gigafactory” for its facility in Sparks, Nevada. As the title of this map suggests, it’s becoming the generic description for any large battery cell production facility. 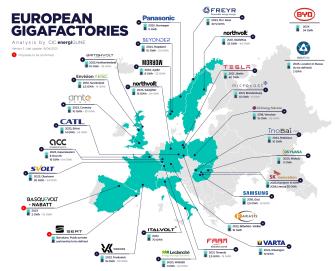 By the end of the decade, Europe will have around 30 gigafactories.Credit: CIC energiGUNE

Despite the fact that Tesla’s Nevada plant is on its way to becoming the world’s largest building, battery production capacity is growing fastest in Europe. Predictions vary, but all observers agree that Europe is on the verge of a Great Leap Forward. Here’s why:

So, who will be Europe’s answer to CATL (short for Contemporary Amperex Technology Co. Ltd.), China’s main battery manufacturer? There are several pretenders to the crown. Here are some:

That second plant is not yet on the map. Also missing are the half dozen gigafactories that Volkswagen aims to open in the coming years. If Europe is to become self-sufficient in EV batteries, even more will be needed.

In 2020, 1.3 million EVs were sold in Europe, edging past China to become the world’s largest EV market. In 2021, Europe looks set to maintain that lead. By 2025 at the latest, EVs will have achieved price parity with fossil-fuel vehicles, not just in terms of total cost of operation but also in upfront cost.

Add to that the increasingly hostile environment — namely, higher taxes and stricter regulations — to fossil-fuel cars in Europe, and the pace of electrification will increase dramatically by mid-decade. Going by EU requirements for CO2 emissions alone, the EV share of the total vehicle market would need to be between 60% and 70% pretty soon.

While that may seem an impossibly high target today, things could start looking different very soon. Volkswagen aims to have full-electric cars make up more than 70 percent of its European sales by 2030. Volvo and Ford even aim to present entirely electric lineups by 2030 at the latest. And that year is also when the UK government intends to ban the sale of new fossil-fuel cars.

All of which could translate into base demand for EV batteries in Europe as high as 1,200 GWh by 2040. Even with all planned factories on the map running at maximum capacity, that still leaves a production capacity gap of about 40%.

To avoid batteries becoming a bottleneck for electrification, the EU likely will pour even more money into the industry via the European Green Deal and Europe’s post-COVID recovery plan. Battery production is not just strategically sound; it also boosts employment.

A study by Fraunhofer ISI says for each GWh added in battery production capacity, count on 40 jobs added directly and 200 in upstream industries. The study forecasts battery manufacturing could generate up to 155,000 jobs across Europe by 2033 (although it doesn’t mention how many would be lost due to reduced production of fossil-fuel cars).

And how fares America? Electrification is coming to the U.S. as well. By one estimate, EVs will have a market penetration of about 15% by 2025. Deloitte predicts EVs will take up 27% of new car sales in the US by 2030. The Biden administration is keen to make up for past inaction in terms of switching to post-fossil energy. But it has its work cut out.

Apart from Tesla’s Gigafactory, the U.S. has only two other battery production facilities. If current trends continue, there would be just ten by 2030. At that time, China will have 140 battery factories and Europe, according to this map, close to 30. If U.S. production can’t keep up with demand, electrification will suffer from the dreaded battery bottleneck. Unless America is content to import its batteries from Europe or China.

This map was produced by CIC energiGUNE, a research center for electrochemical and thermal energy storage, set up by the government of the Basque Country. Image found here on their Twitter.

Tags
carsChinaElectricityEuropemapssustainability
In this article
carsChinaElectricityEuropemapssustainability
Related
Strange Maps
Electricity generation by U.S. state
U.S. states vary radically in terms of electricity generation. Vermont is the cleanest, while Delaware is the dirtiest.
The Present
How 3 new technologies can bring us closer to 100% renewable energy
Scientists are solving the problem of costly energy storage.
The Present
Rare earth war: can the U.S. even compete with China?
China’s dominance of the rare earth metal industry is part of its overall geopolitical strategy.
Strange Maps
Did dark magic conjure up the British Empire?
Esoteric evidence points to a ritual performed by Queen Elizabeth’s court magician John Dee.
Strange Maps
Europe’s oldest map shows tiny Bronze Age kingdom
Discovered in 1900, the Saint-Bélec slab languished unrecognized in a castle basement for over a century.
Up Next
Starts With A Bang
Ask Ethan: Were Mars And Venus Ever Living Planets?
While Mars is known as a frozen, red planet today, it has all the evidence we could ask for of a watery past, lasting for approximately the first 1.5 billion […]