Rolls-Royce has announced that its zero-emission, one-seater racing plane will take flight in the spring of 2020 with the aim of beating the world record for the fastest electric aircraft. Siemens had set the previous record in 2017 with a speed of 210 miles per hour, but Rolls-Royce’s plane — dubbed ACCEL (Accelerating the Electrification of Flight) — is aiming for 300+.

The Intergovernmental Panel on Climate Change (IPCC) estimates that today’s aviation industry contributes about 3.5 percent toward climate change. If no action is taken to mitigate or reduce the aviation industry’s emissions the IPCC predicts that this number could rise to anywhere between 5 and 15 percent by 2050.

These facts and the nascent “flight-shaming” movement inspired by Greta Thunberg have pushed aviation companies to develop electric planes, a task that involves far greater technical challenges than developing electric automobiles. However, experts claim that zero-emission planes for passengers are decades away from being realized.

In a statement, Rolls-Royce officials described the importance of ACCEL in pursuit of this goal. “This is not only an important step towards the world-record attempt,” said Rob Watson, the director of Rolls-Royce Electric, “but will also help to develop Rolls-Royce’s capabilities and ensure that we are at the forefront of developing technology that can play a fundamental role in enabling the transition to a low carbon global economy.”

In collaboration with the electric motor manufacturer YASA and the aviation startup Electroflight, Rolls-Royce’s ACCEL features the most power-dense battery pack ever assembled for aircraft. Its 6,000 cells provide “energy to fuel 250 homes or fly 200 miles (London to Paris) on a single charge.” 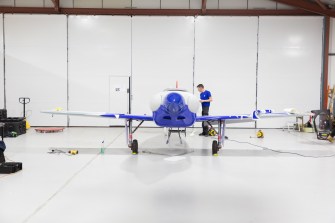 The age of electric flight

Other recent projects show that the electric age of aviation is just beginning to flex its wings. In December 2019, the Canadian commuter airline Harbour Air demonstrated the first electric commercial passenger aircraft. The ePlane, as the project was dubbed, is a seaplane designed for island hopping around the Canadian coastline. Because of the relatively small passenger load and distances involved, this first electric aircraft is well-suited to this purpose, as it can only hold 6 passengers and fly for 30 minutes (with another 30 minutes of reserve power) before requiring recharging.

More projects related to electric aviation were unveiled earlier in the year during the Paris Airshow, including Alice, a project by the Israeli firm Eviation. Alice will be a nine-passenger commercial electric aircraft capable of flying 650 miles at 276 miles per hour and is scheduled to enter service by 2022.

While reducing emissions is a nice bonus for these companies, much of this development is driven by simple economics; electricity is far, far cheaper than conventional fuel, and even after investing in all this R&D, air travel will be significantly more cost-effective.

That R&D has delivered results. Much of the technologies involved in electric aircraft and electric vehicles in general has advanced extremely rapidly, with one crucial exception: batteries.

Without a means of storing large amounts of energy more densely and more efficiently, electric aircraft’s range will be significantly limited. Currently, 80 percent of aviation CO2 emissions result from flights that travel over 1,500 km (a little less than 1,000 miles), distances that no electric aircraft is capable of covering.

Batteries can be optimized for six different characteristics: their energy density, cost, lifespan, temperature endurance, safety, and power (or the rate at which energy can be released). A smartphone’s lithium-ion battery, for instance, should be cheap and endure swings in temperature, but it doesn’t need to last too long or release too much energy at once. An airplane’s battery system needs to excel on all six of these metrics.

Batteries are tricky, but advances are being made in this industry. With further advancements in electric aviation technology and battery technology, we might get to continue to visit the beautiful places that Earth has to offer without risking their disappearance in the process.

In the future, driving an app across a bridge could let engineers know how safe it is.
The Past

For centuries, the only way to travel between the Old and New World was through ships like the RMS Lusitania. Experiences varied wildly depending on your income.
Life

Inspired by the shape of a New Caledonian crow’s beak, researchers created a new 3D-printed prototype of tweezers.
Up Next
Life