We have an insatiable need for energy. When we need to operate something that cannot be simply plugged in, power is going to have to come from a battery, and the battle for a better battery is being fought in labs all over the world. Hold that thought for a moment.

Nuclear waste — it’s the radioactive detritus from nuclear power plants that no one wants stored near their homes or even transported through their towns. The nasty stuff is toxic, dangerous, it takes thousands of years to fully degrade, and we keep making more of it.

Now a company from California, NDB, believes it can solve both of these problems. They say they’ve developed a self-powered battery made from nuclear waste that can last 28,000 years, perfect for your future electric vehicle or iPhone 1.6 x 104. Producing its own charge—rather than storing energy created elsewhere—the battery is made from two types of nano-diamonds, rendering it essentially crash-proof if used in cars or other moving objects. The company also says its battery is safe, emitting less radiation than the human body.

NDB has already completed a proof of concept and plans to build its first commercial prototype once its labs have resumed operations post-COVID. 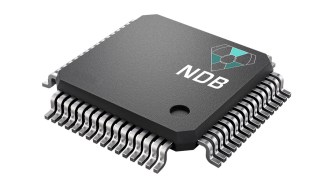 NDB’s battery as it might look as a circuit-board componentImage source: NDB

The nuclear waste from which NDB plans to make it batteries are reactor parts that have become radioactive due to exposure to nuclear-plant fuel rods. While not considered high-grade nuclear waste—that would be spent fuel—it’s still very toxic, and there’s a lot of it in a nuclear generator. According to the International Atomic Energy Agency, the “core of a typical graphite moderated reactor may contain 2000 tonnes of graphite.” (A tonne is one metric ton, or about 2,205 lbs.)

The graphite contains the carbon-14 radioisotope, the same radioisotope used by archaeologists for carbon dating. It has a half-life of 5,730 years, eventually transmuting into nitrogen 14, an anti-neutrino, and a beta decay electron, whose charge piqued NDB’s interest as a potential means of producing electricity.

NDB purifies the graphite and then turns it into tiny diamonds. Building on existing technology, the company says they’ve designed their little carbon-14 diamonds to produce a significant amount of power. The diamonds also act as a semiconductor for collecting energy, and as a heat sink that disperses it. They’re still radioactive, though, so NDB encases the tiny nuclear power plants within other inexpensive, non-radioactive carbon-12 diamonds. These glittery lab-made shells serve as, well, diamond-hard protection at the same time as they contain the carbon-14 diamonds’ radiation.

NDA plans to build batteries in a range of standard—AA, AAA, 18650, and 2170—and custom sizes containing several stacked diamond layers together with a small circuit board and a supercapacitor for collecting, storing, and discharging energy. The end result is a battery, the company says, that will last a very long time.

NDB predicts that if a battery is used in a low-power context, say, as a satellite sensor, it could last 28,000 years. As a vehicle battery, they anticipate a useful life of 90 years, much longer than any single vehicle will last—the company anticipates that one battery could conceivably provide power for one set of wheels after another. For consumer electronics such as phones and tablets, the company expects about nine years of use for a battery.

“Think of it in an iPhone,” NDB’s Neel Naicker tells New Atlas. “With the same size battery, it would charge your battery from zero to full, five times an hour. Imagine that. Imagine a world where you wouldn’t have to charge your battery at all for the day. Now imagine for the week, for the month… How about for decades? That’s what we’re able to do with this technology.”

NDB anticipates having a low-power commercial version on the market in a couple of years, followed by a high-powered version in about five. If all goes as planned, NDB’s technology could constitute a major step forward, providing low-cost, long-term energy to the world’s electronics and vehicles. The company says, “We can start at the nanoscale and go up to power satellites, locomotives.”

The company also expects their batteries to be competitively priced compared to current batteries, including lithium ion, and maybe even cheaper once they’re being produced at scale—owners of nuclear waste may even pay the company to take their toxic problem off their hands.

Short-hop regional flights could be running on batteries in a few years.
Hard Science

The war in Ukraine is unlikely to trigger a catastrophic nuclear meltdown. Physics and smart engineering are the reasons why.
Up Next
Health