The combined blows of political instability, terrorist attacks, and the COVID-19 pandemic have taken a toll on Egypt, driving down its yearly tourist numbers to unacceptably low levels. In response, the county has amplified archaeological work in hopes of keeping tourist interest alive.

The work paid off. This week, investigations of a necropolis south of Cairo revealed more than two dozen mummies buried more than 2,500 years ago. 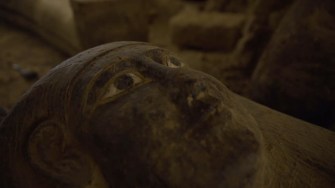 Credit: The Egyptian Ministry of Antiquities/Facebook

The first 13 coffins were found stacked on top of one another in a shaft 11 meters deep. All of the sarcophagi were completely sealed and apparently hadn’t been tampered with since there were buried. In some cases, the paint on the wooden coffins is still visible, giving them a vibrant appearance.

Shortly after that find, the ministry of antiquities announced the discovery of 14 more coffins at the same site in a similar shaft. Similarly to the previous find, these coffins were remarkably well preserved and featured painted hieroglyphics.

The finds were also detailed in a Facebook post by the Egyptian Ministry of Tourism and Antiquities. At the moment, we don’t know who these mummies were, what kind of lives they lived, or what items they decided to take to their graves. This information is expected to turn up soon. More details on the mummies are expected next month.

The remains were found at the Saqqara Plateau, known to have housed the necropolis of the city of Memphis during that era of Egyptian history. It is well known for its Step Pyramid of Djoser, perhaps the earliest example of cut stone construction at such a scale in human history. Located a mere 16 kilometers (10 miles) south of the better known Great Pyramid at Gaza, Saqqara has been a site of significant archaeological interest for more than a century.

The earliest burials there date back to the first dynasty, some 5,000 years ago. The site remained in use as a burial ground and religious center to the rise of Islam in the 7th century C.E. It’s six thousand years of service has given it a unique collection of monuments, pyramids, and tombs for high ranking officials and pharaohs, alongside galleries for the mummies of pets, statues of Greek philosophers and poets, and the remains of monasteries.

Of course, while the mummies of pharaohs (and the massive wealth they were buried with) capture public interest, mummification was not just for royalty. Many tombs are filled with the remains of middle-class Egyptians, rather than those of royalty, and feature simpler variations of the elite’s burial practices.

The Ministry of Antiquities expects more sarcophagi to be found at the site and has already announced further excavations.

In the Canaan religion, Yahweh was a lesser god, who was assigned the land of Israel. Here’s how he became “God Almighty.”
The Past

The ancient Maya enjoyed filling their teeth with gemstones. A new study reveals how the procedure was done and how it didn’t kill them.
The Past

Experimental archaeology: Marching an elephant across the mountains to test history

Experimental archaeology is the practice of recreating past events using knowledge and tools available at the time. Sometimes, it involves elephants.
The Past

Human sacrifice appears to be as old as humanity itself. Still, experts disagree on how and where the practice first originated.
Up Next
Hard Science