From time to time, asteroids whizzing past Earth get trapped by our gravitational pull, falling into orbit around the planet. These rocks only stay for a while, eventually escaping and continuing on their journey to who-knows-where. While they’re here, they’re considered “minimoons.”

Astronomers have detected an object that’s likely to become our next minimoon. But it’s either not an asteroid or it’s an odd one. Really, scientists suspect it’s man-made tech returning home after many years out in cold, lonely space.

Asteroid 2020 SO may get captured by Earth from Oct 2020 - May 2021. Current nominal trajectory shows shows capture through L2, and escape through L1. Highly-chaotic path, so be prepared for lots of revisions as new observations come in. @renerpho @nrco0e https://t.co/h4JaG2rHEd pic.twitter.com/RfUaeLtEWq 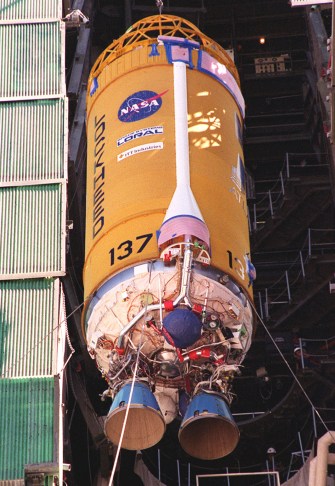 The first clue 2020 SO isn’t your ordinary asteroid is its exceptionally low velocity. It’s traveling much more slowly that a typical asteroid — their average rate of travel is 18 kilometers (58,000 feet) per second. Even moon rocks sent careening into Earth orbit by impacts on the lunar surface outpace pokey 2020 SO.

For another thing, 2020 SO has an orbital path very similar to Earth’s, lasting about one Earth year. It’s also just slightly less circular than our own orbit, from which it’s barely tilted off-axis.

So, what is it? NASA estimates that the object has dimensions very reminiscent of a discarded Centaur rocket stage from the Surveyor 2 mission that landed an unmanned craft on the moon. Back in the day, rocket stages were jettisoned as craft were aimed toward their desired position. This stuff, if released high enough, remains in space. It appears that this Centaur rocket, launched in September 1966, is now making its way back homeward, at least for a little bit.

When 2020 SO arrives at its closest point in December, the rocket is expected to be about 50,000 kilometers from Earth. Its next closest approach is much further: 220,000 kilometers, in February 2021.

Earthly space programs being as young as they are, scientists would love to know what’s happened to our rocket during a half century in space.

While 2020 SO won’t get close enough to drop into our atmosphere, its slow progress has scientists hopeful that they’ll still get some kind of a decent look at it.

Spectroscopy may be able to reveal what the rocket’s surface is like now — has any of its paint survived, for example? Of course, being out in space, it’s likely to have been hit by lots of dust and micrometeorites, so the current state of its surfaces is also of interest. Experts are curious to know how reflective the rocket is at this point, valuable information that can help planners of future long-term missions anticipate how well a craft out in space for extended periods will remain able to reflect sunlight.

Tags
astronomymini-moonminimoonnasaplanetsrocket sciencespace
In this article
astronomymini-moonminimoonnasaplanetsrocket sciencespace
Related
Life
“I went to space and discovered an enormous lie”
What astronaut Ron Garan saw in space changed his life forever – here’s what it taught him.
▸
8 min
—
with
Ron Garan
Hard Science
10 paradoxes that will stretch your mind
From time-traveling billiard balls to information-destroying black holes, the world’s got plenty of puzzles that are hard to wrap your head around.
Videos
The true story behind Carl Sagan’s cult classic, Contact
Do aliens dream about meeting us, too?
▸
with
Jill Tarter
Videos
NASA astronaut explains humanity’s trajectory to Mars
The first human that isn’t an Earthling could be in our lifetime.
▸
5 min
—
with
Robert Curbeam
How Earth’s 23.4° tilt makes life beautiful
Rituals come as much from religion as they do from the way Earth spins around the Sun.
▸
4 min
—
with
Sasha Sagan
Up Next
Hard Science
Is resurrection possible? Researchers catalogue the ways science may achieve it.
From cryonics to time travel, here are some of the (highly speculative) methods that might someday be used to bring people back to life.