There’s no evidence of an afterlife. But there’s also no proof that medical death is the end of subjective experience, or that death is irreversible, or immortality impossible.

Alexey Turchin, an author, life extensionist, and transhumanist researcher from Moscow, believes artificial intelligence will eventually become so powerful that humans will be able to “download” themselves — or, the quantifiable information contained in their brains — into computers and live forever.

It’ll take a long time to develop that technology — anywhere from 100 to 600 years, according to Turchin.

“The development of AI is going rather fast, but we are still far away from being able to ‘download’ a human into a computer,” Turchin told Russia Beyond. “If we want to do it with a good probability of success, then count on [the year] 2600, to be sure.”

That might be out of reach for modern humans. But downloading yourself onto a computer is just one potential route to immortality. In 2018, Turchin and Maxim Chernyakov, of the Russian Transhumanist Movement, wrote a paper outlining the main ways technology might someday make resurrection — and, therefore, immortality — possible.

The paper defines life as a “continued stream of subjective experiences” and death as the permanent end of that stream. Immortality, to them, is a “life stream without end,” and resurrection is the “continuation of that same stream of experiences after an arbitrarily long gap.”

Another key clarification is the identity problem: How would you know that a downloaded copy of yourself really was going to be you? Couldn’t it just be a convincing yet incomplete and fundamentally distinct representation of your brain?

If you believe that your copy is not you, that implies you believe there’s something more to your identity than the (currently) quantifiable information contained within your brain and body, according to the researchers. In other words, your “informational identity” does not constitute your true identity.

In this scenario, there must exist what the researchers call a “non-informational identity carrier” (NIIC). This could be something like a “soul.” It could be “qualia,” which are the unmeasurable “subjective experiences which could be unique to every person.” Or maybe it doesn’t exist at all.

It’s no matter: The researchers say resurrection, in some form, should be possible in either scenario.

“The problem of the nature of human identity could be solved by future superintelligent AI, but for now it cannot be definitively solved. This means that we should try to preserve as much identity as possible and not refuse any approaches to life extension and resurrection even if they contradict our intuitions about identity, as our notions of identity could change later.”

Turchin and Chernyakov outline seven broad categories of potential resurrection methods, ranked from the most plausible to most speculative.

The first category includes methods practiced while the person is alive, like cryonics, plastination, and preserving brain tissue through processes like chemical fixation. The researchers noted that there have been “suggestions that the claustrum, hypothalamus, or even a single neuron is the neural correlate of consciousness,” so it may be possible to preserve just that part of a person, and later implant it into another organism.

Other methods get far stranger. For example, one method includes super-intelligent AI that uses a Dyson sphere to harness the power of the sun to “power enormous calculation engines” that would “reconstruct” people who collected a sufficient amount of data on their identities. 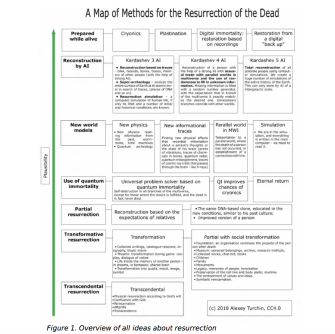 “The main idea of a resurrection-simulation is that if one takes the DNA of a past person and subjects it to the same developmental condition, as well as correcting the development based on some known outcomes, it is possible to create a model of a past person which is very close to the original,” the researchers wrote.

“DNA samples of most people who lived in past 1 to 2 centuries could be extracted via global archeology. After the moment of death, the simulated person is moved into some form of the afterlife, perhaps similar to his religious expectations, where he meets his relatives.”

Delving further into sci-fi territory, another resurrection method would use time-travel technology.

“If there will at some point be technology that allows travel to the past, then our future descendants will be able to directly save people dying in the past by collecting their brains at the moment of death and replacing them with replicas,” the paper states.

How? Sending tiny robots back in time.

“A nanorobot could be sent several billion years before now, where it could secretly replicate and sow nanotech within all living being[s] without affecting the course of history. At the moment of death, such nanorobots could be activated to collect data about the brain and preserve it somewhere until its future resurrection; thus, there would be no need for forward time travel.” 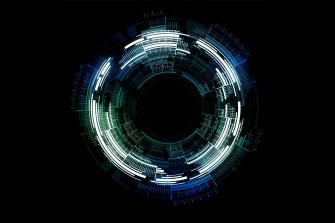 The paper goes on to outline some more resurrection methods, including ones that involve parallel worlds, aliens, and clones, along with a good, old-fashioned possibility: God exists and one day he resurrects us.

In short, it’s all extremely speculative.

But the aim of the paper was to catalogue known potential ways humans might be able to cheat death. For Turchin, that’s not some far-off project: In addition to studying global risks and transhumanism, the Russian researcher heads the Immortality Roadmap, which, similar to the 2018 paper, outlines various ways in which we might someday achieve immortality.

Although it may take centuries before humans come close to “digital immortality,” Turchin believes that life-extension technology could allow some modern people to survive long enough to see it happen.

Want a shot at being among them? Beyond the obvious, like staying healthy, the Immortality Roadmap suggests you start collecting extensive data on yourself: diaries, video recordings, DNA information, EEGs, complex creative objects — all of which could someday be used to digitally “reconstruct” your identity.

But odds are you’re not interested. Although Turchin and other scientists are bent on finding ways to avoid death and extend life indefinitely, surveys repeatedly show that most people would not opt to live forever if given the choice.

Anxieties about being identified will be superseded by fears of being analyzed.
The Future

What if intelligence can thrive without consciousness?
Up Next
The Present