Humans are accustomed to progress. We can travel to the planet’s farthest reaches in a matter of hours—a day, at most. Imagining otherwise is impossible. Sure, we can think about it, but our scope of time is limited to generations, not epochs.

Witness our incredulity today. COVID-19 has revealed the impatience that immediately surfaces when we’re told not to do something. Though diseases have wiped out entire populations in the past, we’ve come to expect solutions to instantaneously appear. History is long; our awareness of history, not so much.

For most of time, the geographic range of our ancestors was tiny. Even the dozens of miles hunter-gathering tribes traveled pales in comparison to pond-hopping in a plane. Geotagging travel photos took a few billion years to arrive; so did pandemics, in fact. Like humans, diseases generally remained local, spread only as far as your tribe traveled.

Not that diseases didn’t exist. Viruses tumbled around the planet shortly after single-celled organisms emerged from the strange brew of Earth’s initial gases and liquids. In some ways, we’re returning to that past. Climate change is unlocking diseases our collective consciousness thought it left behind. Recently, an intact extinct cave bear, dating back nearly 40,000 years, was discovered in Siberia. Researchers had better wear protective gear: shifting temperatures are unlocking long-forgotten pathogens. Who knows what fury that beast wants to unleash.

Our relationship to disease changed after the last Ice Age ended roughly 12,000 years ago. The Pleistocene Epoch lasted roughly 2.5 million years; the conditions for mass gatherings did not yet exist. As we packed closer together, and as we packed other species close to us, viruses began circulating broadly.

Everything in life is a trade-off. The price of cities is recurring battles with coronaviruses.

While we rightfully look toward infectious disease experts during times such as now, archaeologists also have plenty to offer. A new research article, published in the journal, Bioarchaeology Journal, turns back the clock to ancient Vietnam. The findings offer important clues about why we need to eradicate COVID-19.

Lead author Melandri Vlok, a PhD student at the University of Otago in New Zealand (with support from researchers in Australia, Vietnam, Japan, and the UK), investigated a case of yaws that ran through the Neolithic archeological site of Mán Bạc in Northeast Vietnam.

Yaws remains a common infectious disease in at least 13 tropical countries, with up to a half-million infected each year. Hard skin lesions form on the victim’s bodies; they can form painful ulcers. While lesions usually subside within six months, bone and joint pain and fatigue are common. Some cases last many years and result in permanent scars. On occasion, death follows a long battle.

Subsistence farmers in mainland China have long battled the environment. Finding the right soil and water sources for their crops has been a generational battle. Roughly 4,000 years ago, such farmers made their way into Mainland Southeast China (modern day Vietnam), where, as Vlok writes, “genetic admixture and social transition occurs between foragers and farmers.” In 2018, Vlok traveled to Mán Bạc to study the remains of seven skeletons, which included two adults, two adolescents, and two children.

Her findings help give us perspective on today’s proliferation of the coronavirus. As she says,

“This matters, because knowing more about this disease and its evolution, it changes how we understand the relationship people have with it. It helps us understand why it’s so difficult to eradicate. If it’s been with us thousands of years it has probably developed to fit very well with humans.” 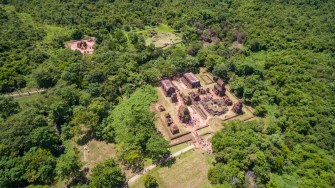 Yaws is not the only disease considered in the article. Tuberculosis, brucellosis, and cancers were also discussed. The goal of the research was to identify disease spread through cultures and the chronic problems left behind, sometimes for millennia. Vlok notes how temperature fluctuations in the Mán Bạc region affected a variety of diseases. Yaws appeared to have spread easily due to an abundance of water and vegetation, combined with increased population density—children are more likely to spread this disease.

“Pre-industrialized agricultural communities have also been associated with increased incidence of yaws. The coastal region is also slightly warmer and more humid than inland northern Vietnam and therefore more conducive to the spread of yaws.”

The Climate Clock is ticking down. We’re already experiencing the ravages of this global shift, and it’s not going to get any easier if interventions are not immediately legislated. While no single science will help us wrap our heads around the immediate future, Vlok suggests factoring in archaeology. Past precedent matters.

Gazing back a few hundred generations offers important clues for the future—really, the present—that we must confront. A concerted effort by the World Health Organization in the 1950s couldn’t eradicate yaws. Diseases that have an opportunity to hang around will exploit every advantage it can. The blasé attitude too many Americans currently hold about the novel coronavirus’s dangers is going to have a reverberating effect through the generations. As Vlok concludes,

“This shows us what happens when we don’t take action with these diseases. It’s a lesson of what infectious diseases can do to a population if you let them spread widely. It highlights the need to intervene, because sometimes these diseases are so good at adapting to us, at spreading between us.”

A new study says the reason cave paintings are in such remote caverns was the artists’ search for transcendence.
The Past

With almost every shovel of sand shifted in Egypt, another artifact comes to light.
The Past

Archaeologists discovered what they thought was an ancient synagogue. They were wrong.

Instead of worshipping Yahweh, the devotees were perhaps dedicated to Mars and Jupiter.
Up Next
Starts With A Bang

Don’t Bet On Aliens: Phosphine Is Amazing, But Doesn’t Mean ‘Life On Venus’

I’m not saying it’s not aliens, but it’s not aliens.When it comes to life in the Universe, we still have no definitive answer to the biggest question of all, “are we […]