Is there an afterlife?

Despite centuries of inquiry, nobody’s made progress on this fundamental question, and perhaps nobody ever will. So, maybe a better question is: Can humans create an afterlife?

Some scientists think so.

In 2018, Alexey Turchin and Maxim Chernyakov, both members of the Russian Transhumanist Movement, wrote a paper outlining the main ways science might someday make immortality and resurrection possible. Called the “Immortality Roadmap,” the project describes the ways people might be able to extend lifespan or live forever, from using cryonics to freeze themselves, to constructing nanobots for “treatment of injuries and cell cyborgization.”

But the Immortality Roadmap mentions one particularly grandiose road to immortality. Outlined in “Plan C” of the project, the idea is to create a simulation of humanity’s past through artificial intelligence that’s able to digitally reconstruct people.

The AI would use DNA and other information about individuals to create models of those individuals within a simulation, allowing recently deceased people to experience another chance at life — or, at least an approximation of life.

“The main idea of a resurrection-simulation is that if one takes the DNA of a past person and subjects it to the same developmental condition, as well as correcting the development based on some known outcomes, it is possible to create a model of a past person which is very close to the original,” the researchers wrote.

“DNA samples of most people who lived in past 1 to 2 centuries could be extracted via global archeology. After the moment of death, the simulated person is moved into some form of the afterlife, perhaps similar to his religious expectations, where he meets his relatives.”

But would that digital copy really be you, or rather a fundamentally different digital being that resembles you? What about the other “people” that inhabit the simulation, would they be “real”? And would people actually want to repeat their lives over again, perhaps forever?

Of course, these are questions that Immortality Roadmap can’t answer. But what’s clear is that, if technology ever becomes able to create a “resurrection simulation,” it’s going to require vast amounts of computing power — far more than what currently exists on Earth. That’s where Dyson spheres come into play.

In 1960, the theoretical physicist Freeman Dyson published a paper describing a peculiar strategy scientists could use to detect signs of alien life: look for stars encompassed by gigantic megastructures.

Why? Dyson figured that if spacefaring alien civilizations do exist, then they must have figured out a way to generate vast amounts of energy. One theoretical way aliens could do that is through harnessing the power of stars: By surrounding a star with orbiting structures that capture solar energy, a civilization could theoretically generate far more energy than they could on a planet.

That’s the basic idea behind Dyson spheres. Of course, modern science is far from being able to build such a complex megastructure, and it’s unclear whether it’ll ever be possible.

“An actual sphere around the sun is completely impractical,” Stuart Armstrong, a research fellow at Oxford University’s Future of Humanity Institute who has studied megastructure concepts, told Popular Mechanics in 2020.

There are many questions about and arguments against the feasibility of Dyson spheres. Obviously, our modern engineering capabilities wouldn’t enable us to build a structure that big and complex, and then transport it to the sun. And even if engineers could build an enormous sun shell, we don’t have materials with enough tensile strength to hold together the structure once it’s surrounding the sun.

Other potential problems: space debris colliding with the sphere, inefficiencies in transporting the energy back to Earth, and having to perform maintenance on a megastructure that’s dangerously close to the sun. In short, the Dyson sphere is a very theoretical concept. But some people think building a Dyson sphere is more feasible than it seems. In 2012, the bioethicist and transhumanist George Dvorsky published a blog post titled “How to build a Dyson sphere in five (relatively) easy steps.” His strategy, in short, calls for sending autonomous robots into space, where they would:

“The idea is to build the entire swarm in iterative steps and not all at once. We would only need to build a small section of the Dyson sphere to provide the energy requirements for the rest of the project. Thus, construction efficiency will increase over time as the project progresses,” Dvorsky wrote.

“We’re going to have to mine materials from Mercury. Actually, we’ll likely have to take the whole planet apart. The Dyson sphere will require a horrendous amount of material—so much so, in fact, that, should we want to completely envelope the sun, we are going to have to disassemble not just Mercury, but Venus, some of the outer planets, and any nearby asteroids as well.” 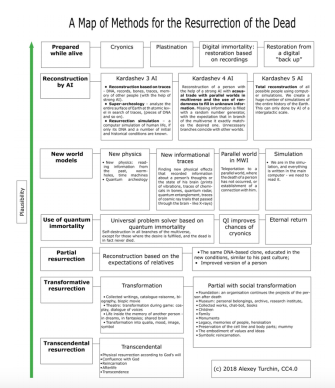 Turchin echoed a similar idea to Popular Mechanics, acknowledging that while humans currently can’t build a Dyson sphere, “nanorobots could do it.”

Still, even if scientists someday manage to create a Dyson sphere that’s able to power a resurrection simulation, there’s a good chance many people won’t take part: Surveys repeatedly show that most people would not opt to live forever if given the choice.

From time-traveling billiard balls to information-destroying black holes, the world’s got plenty of puzzles that are hard to wrap your head around.
Starts With A Bang

It’s the very closest stars to us that hold the key to unlocking the possibilities for life in star systems all throughout the Universe.
The Present

It could one day fuel nuclear fusion reactors.
Starts With A Bang

In the 20th century, many options abounded as to our cosmic origins. Today, only the Big Bang survives, thanks to this critical evidence.
Up Next
Starts With A Bang

Witness Mars From The Perspective Of Every Successful Lander And Rover

This slightly-cropped, 360-degree panorama from the Curiosity mission shows Mars at sunset. This mosaic of MastCam images from January 27-February 3, 2013, shows what Mars would look like with real […]