Why create a Matrioshka Brain

To some people, like Elon Musk, the troubling thought is that we don’t really know whether we live in a “real” or impressively-rendered digital world. What makes the prospect of us living in a simulation more than a tired billionaire’s flight of fancy is the possible existence of Matrioshka brains, theoretical megastructures that could harness the power of stars.

To understand how they would work, we need to look very far into the future.

With the advent of scientific thinking, humans discovered a seemingly reliable method for probing the world around us. We learned much about what the world is made of and how to bend some parts of it to our will. But what we learned and developed technologically is likely negligent compared to what’s about to come, especially if we project our current rate of progress. One prediction is that the needs of an advanced society for more energy will at some point lead to the creation of megastructures called Dyson Spheres. These would encircle stars like our Sun to harness their energy.

Freeman Dyson, the physicist who came up with the idea of Dyson Spheres saw their possible existence as something to keep in mind when searching for alien life. His 1960 paper “Search for Artificial Stellar Sources of Infra-Red Radiation” advocates looking for unusual emission signatures of hypothetical structures like Dyson Spheres to spot other spacefaring civilizations.

But as inventor Robert Bradbury wrote, Dyson saw his spheres as quite specifically as a place to live. For example, a “layer of habitats for human beings orbiting the Sun between the orbits of Mars and Jupiter.” What Bradbury came up with is an extension of that idea – what if a Dyson sphere was turned into a computer, the most powerful machine in the Universe?

“If extraterrestrial intelligent beings exist and have reached a high level of technical development, one by-product of their energy metabolism is likely to be the large-scale conversion of starlight into far-infrared radiation,” wrote Freeman Dyson. “It is proposed that a search for sources of infrared radiation should accompany the recently initiated search for interstellar radio communications. 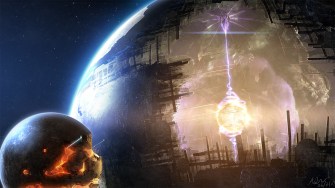 What Bradbury envisioned in the anthology “Year Million: Science at the Far Edge of Knowledge” is that far in the future, we’d have the technology to create a set of nested shells around a star – each shell essentially being a Dyson Sphere. Because this megastructure would resemble a Russian nested Matryoshka doll, where smaller dolls fit inside larger ones, he called the concept a “Matrioshka Brain”. This solar-system-sized machine would be the most powerful computer in the Universe, harvesting all the useful energy from a star, while rendering it “essentially invisible at visible wavelengths”.

To work as a giant computer, or the “highest capacity thought machine” as Bradbury wrote, a Matrioshka Brain (MB) would draw power from the star and spread it through the shells. One shell (or sphere) would collect all the energy it could draw from the star and then would pass on the excess to another larger processing shell that would surround it. This would repeat until all the energy was exhausted.

If they were built in our solar system, the Matrioshka Brain shells would have orbits ranging from inside Mercury’s to outside Neptune’s, claimed Bradbury.

How and when we could get a Matrioshka Brain

Needless to stay, the scope of the engineering and resources required for such a project would be tremendous and far beyond what humans can currently muster. One technology mentioned by Bradbury that is actually being created now and can lead to the construction of such immense structures are self-replicating factories. The company Made in Space has been making headway in its implementation and design of 3D printing tech in space, with the ultimate goals of putting factories that build themselves into orbit.

How would you, a superpower civilization that ranks high on the Kardashev scale, use such a computer, which could conceivably have all the power of the Sun at its disposal? Among science fiction aficionados, uses of this hypothetical super-tool, a class B stellar engine, could range from uploading human minds into virtual reality to changing the structure of the universe, as imagined author Charles Stross. The computers could also be used to simulate reality, potentially creating a whole alternate universe. This, of course, leads to the question – how real is our current universe?

What if the whole world around you was just a very good simulation? One that engages all your senses, feeding you information about supposed smells, sights and sounds. But, ultimately, it’s a computer program that’s running and none of the things you think you are encountering are actually there. And what’s the difference if the simulation is so amazingly realistic?

The mere prospect of Matrioshka Brains makes these questions have real potency. For what it’s worth, Bradbury predicted that if current trends (circa 2000) were projected, humans would be able to build such a machine brain by 2250. He thought it would require most of the silicon from the planet planet Venus as raw material. Even so, the first MB would have the “thought capacity in excess of a million times the thought capacity of the 6 billion+ people,” wrote Bradbury.

For more on Matrioshka Brains, check out Bradbury’s paper on how to build one.

Humanity’s most advanced tech still hasn’t unraveled the mysteries of the human mind. Can brain scans show us how we store memories?
▸
with
Lisa Genova
The Future

Finally, a sex robot that wants to be your friend

The AI remembers that you are 32 years old and like to eat sushi, except on Thursdays.
The Present

GPT-3, which features 175 billion parameters, just might fool you in a conversation.
The Future

The metaverse has the potential to be revolutionary, for both good and bad. Here is how we can maximize the former and prevent the latter.
Up Next
Starts With A Bang

Happy Halloween from Starts With A Bang!

In a first, I have gone full-astrophysics for Halloween this year. In all its golden glory, I have put together a James Webb Space Telescope costume this year, complete with […]