How will humans discover the existence of extraterrestrial civilizations?

Unless aliens decide to visit Earth, the most likely answer is by scanning the skies for “technosignatures,” which are observational evidence of technological or industrial activity in the Universe.

In a recent paper published in the journal Acta Astronautica, a team of NASA-funded researchers outlined some of the most promising ways scientists and space agencies could search for technosignatures. The paper included a somewhat surprising proposition: Humanity’s “first contact” with aliens is likely to be with a much more advanced civilization.

In other words, there could be many alien civilizations throughout the Universe, or even in our galaxy, but if they’re similar to us in terms of technological advancement, we probably can’t spot them yet. The same goes for those human-like civilizations spotting us.

That’s because the “cosmic footprints” of our civilization and theirs would be relatively small, compared to highly advanced alien civilizations. The researchers call this concept “contact inequality.”

“It seems unlikely that civilizations with a relatively low level of technological development would enter into contact with each other, since that would require either very high sensitivities or highly visible engineering,” reads the paper. “Less advanced civilizations lack the sensitivity needed to detect other civilizations unless they have built very large or luminous structures.” 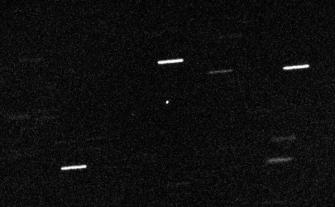 ʻOumuamua,’ the first known interstellar object detected passing through the Solar System. Some scientists have proposed that Oumuamua might be an extraterrestrial artifact.Robert Weryk using Pan-STARRS 1

How? The paper outlines a series of strategies that are either currently being practiced, could be practiced in conjunction with other astronomical projects, or could be developed in the near future.

A few of those strategies include searching for:

When thinking about the best ways to search for alien life, it helps to reverse the perspective: How would aliens know humans exist? With this question in mind, researchers who deal with technosignatures consider all of the signals humans are sending into space.

Some of our technosignatures are transmitted intentionally, like the Arecibo message humans sent toward the globular star cluster M13 in 1974. Others are unintentional, like night-time illumination and pollution-driven atmospheric changes.

To put the concept of technosignatures into perspective, researchers have developed a framework called ichnoscale. Ichnoscale ranks the size of a technosignature relative to what human technology is currently capable of producing.

The scale also ranks the number of potential targets throughout the Universe. For example, searching for a crashed alien probe on the Moon would represent one target, while scanning the stars for Dyson spheres would have millions of targets.

Together, these measurements help scientists estimate the most likely ways to discover evidence of alien civilizations. Of course, there’s no guarantee that any one strategy will work, or that aliens even exist.

That’s one reason why efforts to search for technosignatures have received little funding. But the researchers propose that many of these strategies could be tacked onto other astronomical missions at little cost. 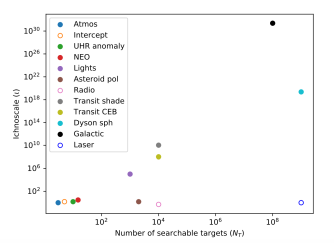 And even if the searches turn up nothing, the researchers said the results would still provide “enormous ancillary benefits on solar system research and advance our knowledge about the objects being scrutinized,” and would “establish quantitative upper bounds on certain types of technologies or developmental stages of civilizations in the solar neighborhood.”

“The search for TS deals with questions that have profound implications on the future of humanity,” the researchers concluded. “Perhaps one the most important is whether technological civilizations are ephemeral or, on the contrary, can be long lasting. A closely related question is whether space faring civilizations are common, and if humankind will eventually become one of them.”

“We do not yet have any answers for these and other important questions but if we can start to explore the search parameter space, even in the absence of any detection we may be able to gain some valuable insights.”

This technological feat changes our cosmic history.
Starts With A Bang

The far side of the Moon is incredibly different from the Earth-facing side. 63 years later, we know why the Moon’s faces are not alike.
Hard Science

The Big Bang is commonly misunderstood, warping our understanding about the Universe’s size and shape.
Starts With A Bang

The recipe for a perfect date night: a rom-com, a bowl of popcorn, and a syringe of testosterone — at least for gerbils, anyway.
Up Next
Life

How do you get usable phosphorus into a system? A new study suggests lightning can do the trick.