A scientist devised a computer algorithm which may lead to transformative discoveries in energy and whose very existence raises the likelihood that our reality could actually be a simulation.

The algorithm was created by the physicist Hong Qin, from the U.S. Department of Energy’s (DOE) Princeton Plasma Physics Laboratory (PPPL).

The algorithm employs an AI process called machine learning, which improves its knowledge in an automated way, through experience.

Qin developed this algorithm to predict the orbits of planets in the solar system, training it on data of Mercury, Venus, Earth, Mars, Ceres, and Jupiter orbits. The data is “similar to what Kepler inherited from Tycho Brahe in 1601,” as Qin writes in his newly-published paper on the subject. From this data, a “serving algorithm” can correctly predict other planetary orbits in the solar system, including parabolic and hyperbolic escaping orbits. What’s remarkable, it can do so without having to be told about Newton’s laws of motion and universal gravitation. It can figure those laws out for itself from the numbers.

Qin is now adapting the algorithm to predict and even control other behaviors, with a current focus on particles of plasma in facilities built for harvesting fusion energy powering the Sun and stars. Along with Eric Palmerduca, a Ph.D. graduate student at PPPL, Qin is using his technique “to learning an effective structure-preserving algorithm with long-term stability to simulate the gyrocenter dynamics in magnetic fusion plasmas,” as he elaborated. He also plans to utilize the algorithm to study quantum physics. 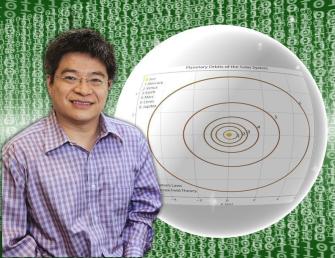 Qin explained the unusual approach taken by his work:

“Usually in physics, you make observations, create a theory based on those observations, and then use that theory to predict new observations, ” said Qin. “What I’m doing is replacing this process with a type of black box that can produce accurate predictions without using a traditional theory or law. Essentially, I bypassed all the fundamental ingredients of physics. I go directly from data to data (…) There is no law of physics in the middle.”

Qin was partially inspired by the work of Swedish philosopher Nick Bostrom, whose 2003 paper famously argued that the world we are living in may be an artificial simulation. What Qin believes he has accomplished with his algorithm is provide a working example of an underlying technology that could support the simulation in Bostrom’s philosophical argument.

In an email exchange with Big Think, Qin remarked: “What is the algorithm running on the laptop of the Universe? If such an algorithm exists, I would argue that it should be a simple one defined on the discrete spacetime lattice. The complexity and richness of the Universe come from the enormous memory size and CPU power of the laptop, but the algorithm itself could be simple.”

Certainly, the existence of an algorithm that derives meaningful predictions of natural events from data does not yet mean that we ourselves have the capabilities to simulate existence. Qin believes we are likely “many generations” away from being able to carry out such feats.

According to Qin, discrete field theories go against the most popular method of studying physics today, which looks at spacetime as continuous. This approach was started with Isaac Newton, who invented three approaches to describing continuous spacetime, including Newton’s law of motion, Newton’s law of gravitation, and calculus.

Qin believes there are serious issues in modern research that stem from the laws of physics in continuous spacetime being expressed through differential equations and continuous field theories. If laws of physics were based on discrete spacetime, as Qin proposes, “many of the difficulties can be overcome.”

If the world works according to discrete field theory, it would look like something out “The Matrix,” made of pixels and data points.

Qin’s work also coincides with the logic of Bostrom’s simulation hypothesis and would mean that “the discrete field theories are more fundamental than our current laws of physics in continuous space.” In fact, writes Qin, “our offspring must find the discrete field theories more natural than the laws in continuous space used by their ancestors during the 17th-21st centuries.”

Check out Hong Qin’s paper on the subject in Scientific Reports.

Tags
aiartificial intelligencecomputersHard Sciencemachine learningnaturephysicsplanetssimulationSpace & Astrophysicsuniverse
In this article
aiartificial intelligencecomputersHard Sciencemachine learningnaturephysicsplanetssimulationSpace & Astrophysicsuniverse
Related
Starts With A Bang
NASA’s Habitable Worlds Observatory to finally answer the epic question: “Are we alone?”
NASA has finally chosen which flagship mission, like Hubble and JWST, will launch in ~2040. Detecting alien life is now a reachable goal.
Starts With A Bang
The galaxy cluster that broke modified gravity
19 years ago, the Bullet Cluster provided an empirical proof for dark matter. Even today, modified gravity still can’t explain it.
The Present
Even in the age of AI, some problems are just too difficult for computers
Computers are growing more powerful and more capable, but everything has limits
Starts With A Bang
Ask Ethan: What are white holes, and do they really exist?
In General Relativity, white holes are just as mathematically plausible as black holes. Black holes are real; what about white holes?
Hard Science
Earth has an eerie “sodium glow,” and astronomers use it to image stars
Air currents in our atmosphere limit the resolving power of giant telescopes, but computers and artificial stars can sharpen the blur.
Up Next
Neuropsych
Fight or flight? Why some people flee and others stand their ground
How different people react to threats of violence.