A popular, recurrent conspiracy theory: all humans will soon be microchipped so the government can track our every movement. This year, that idea was briefly attached to a potential COVID-19 vaccine, though the fear has long been present.

The irony, of course, is that we’re already chipped. We just call them phones.

We probably shouldn’t be surprised that the U.S. Secret Service contracted with a company to use the service, Locate X, in order to track Americans via social media. But they did, and once again we’re forced to distinguish between baseless conspiracies and the real-world consequences of government surveillance.

According to internal Secret Service documents, obtained from a Freedom of Information Act request, the agency paid the Virginia-based company, Babel Street, roughly $36,000 to include Locate X in a social media monitoring package that ultimately cost $2 million.

According to the trademark, Locate X provides:

And that’s only the first one-third of Locate X’s goods and services.

As early as March, Protocol reported on the dangers of Locate X. The deal with Babel Street “allows investigators to draw a digital fence around an address or area, pinpoint mobile devices that were within that area, and see where else those devices have traveled, going back months.”

Despite statements that claim these services collect large swaths of anonymous data, it’s possible to identify individual users. While the terms of use for Locate X states the data is “used for internal research purposes only,” it would be hard to believe the Secret Service is only interested in anonymous research. 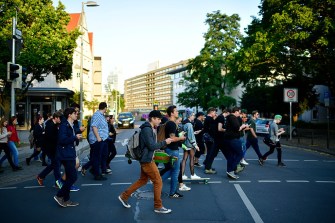 Young players walk through the city centre of Hanover while holding their smartphones and playing “Pokemon Go” on July 15, 2016 in Hanover, Germany.Photo by Alexander Koerner/Getty Images

Besides, the Secret Service is not Babel Street’s only client. Others include the Immigration and Customs Enforcement, the Customs and Border Protection, the Coast Guard, the Drug Enforcement Administration, and others.

The Secret Service has apparently used Locate X to identify credit card skimming thieves. According to former employees of location-based companies that provide data to Babel Street, “the sale of personal location data from commercial firms to the government is more widespread and has been going on longer than previously known.”

In 1985, Neil Postman wrote about Orwell’s “1984” prophecy coming and going. In “Amusing Ourselves to Death,” the cultural critic noted that Orwell got a lot right, but with “Brave New World,” Aldous Huxley may have been the real winner when it comes to understanding the future.

There’s no need for a secret government plot to microchip us. Tech companies sold chips that we willingly bought; governments are simply purchasing the rights to locate them. That’s not a conspiracy. We’re staring straight into the truth every single day.

Tags
activismgovernmentpoliticsprotestsSocial mediasurveillance
In this article
activismgovernmentpoliticsprotestsSocial mediasurveillance
Related
Neuropsych
We need boredom to live better lives. But social media is destroying it
When boredom creeps in, many of us turn to social media. But that may be preventing us from reaching a transformative level of boredom.
High Culture
Could letting social media users rank accuracy help stop misinformation?
People naturally judge fact from fiction in offline social settings, so why is it so hard online?
Health
What is brown noise? Can this latest TikTok trend really help you sleep?
Brown noise, the better-known white noise, and even pink noise are all sonic hues.
Thinking
A “psychological vaccine”: Why prebunking is the best way to fight misinformation
By exposing people to small doses of misinformation and encouraging them to develop resistance strategies, “prebunking” can fight fake news.
The Present
Negative, emotionally manipulative news headlines have skyrocketed since 2000
The media is deliberately pushing your buttons.
Up Next
Neuropsych
Humans could merge with AI through this specialized polymer
Scientists are seeking ways to safely connect computers to the brain.