Disinformation is rampant. On Monday, a group named “America’s Frontline Doctors” held a press conference outside of the U.S. Supreme Court to tout the miracles of hydroxychloroquine, despite contrary evidence. Videos from the event are flooding social media, with the expectable “these doctors are being silenced” rhetoric. This “conspiracy” was boosted when Twitter restricted Donald Trump Jr’s account after he shared the doctors claim that masks are unnecessary for preventing the spread of COVID-19.

Who are these doctors wearing branded white coats?

The founder of this group is Simone Gold, a Burbank-based physician with ties to rightwing groups such as ALEC, FreedomWorks Foundation, and Tea Party Patriots (which backed this event). The group’s website was launched 12 days ago and has since been taken down. There’s Stella Immanuel, a Houston doctor that believes in world leaders are secretly lizards and having sex with witches and demons, and that dreaming has negative consequences. James Todaro also spoke, who, despite claiming to be on the frontline, hasn’t seen a patient since 2018. An event of this magnitude wouldn’t be complete without one of the Bakersfield doctors, Daniel Erickson.

The follow-up question: How do you even begin to counter such disinformation?

“If you see misinformation, ignore it, because engaging with it helps the platforms accomplish the goal of further spreading it,” says Imran Ahmed, founder of the Center for Countering Digital Hate. “Block the person that sent it, then find some good information and share it to try to balance out the algorithmic logic that underpins it.”

Ahmed knows the dangers of internet rabbit holes. He founded the CCDH in 2017 to study the proliferation of identity-based hate in digital spaces, though he recently told me they began to focus solely on the coronavirus in early March. The stakes during a pandemic are too high to ignore.

The first result of that effort is the publication of a 34-page report, “The Anti-Vaxx Industry: Big Tech powers and profits from vaccine misinformation.” After months of investigation, the team discovered anti-vaxx organizations reach 58 million people on social media. Facebook, Instagram, and YouTube have earned nearly $1 billion in revenue from these groups—and Ahmed was lowballing that sum.

“If we were wrong and our calculations were bad, they would have gone after us. I suspect that because we’re incredibly conservative, we may have underestimated it. If they challenged it, they would have to give a real number, and that real number could be substantially higher.”

When I ask Ahmed why these groups spend so much money promoting anti-vaxx disinformation, he laughs while claiming he’s not a psychologist. Though he attended medical school, he focuses on the dangers that platforms pose to society. Right now, Big Tech has found a strange bedfellow in the anti-vaxx movement.

“These platforms were not designed for free speech. The timeline is not about reading the most recent thing. It’s an algorithmic list of content which prioritizes that information which is most engaging.”

The report does reveal interesting clues on the men behind these efforts. The most influential anti-vaxx organizations are funded by osteopath Joseph Mercola, who runs a dietary supplement and medical device company and gives financial support to the National Vaccine Information Center and the Organic Consumers Association, as well as by fund manager Bernard Selz, who ponies up three-fourths of the money that supports the Informed Action Consent Network.

Mercola is easy: he uses fear-mongering to sell supplements, which has put over $100 million into his bank account. Since the start of the pandemic, Mercola has claimed at least 22 vitamins and supplements prevent or cure COVID-19. Vaccines misinformation is just one of his techniques. Previously, he’s stated that microwaves alters the chemistry of food, mobile phones cause cancer, and pasteurized milk causes negative health effects.

Selz is harder to figure out. His philanthropic work is extensive thanks to his management of a $500 million fund. His anti-vaxx efforts, including $1.6 million given to discredited physician Andrew Wakefield, which he used to fund the movement’s opus, “Vaxxed,” appear to be a passion project. Since the Selz family avoids media contact, other reasons may be obscured.

Anti-vaxx sentiment is not new, but social media has given it steroids. As Ahmed notes, anti-vaxxers use the same tactics as other hate groups: don’t trust authorities; disseminate conspiracy theories to create confusion; claim to be the sole authority on a topic.

Shortly after quarantine began, health misinformation actors merged with a hardcore group of committed anti-vaxxers to create what Ahmed calls “a coalition of chaos.” Over the preceding months, this coalition has tested out a number of ideas: 5G causes COVID-19, which had a moment and then faded; track and trace is part of a global effort to microchip you, which never really caught on; and coronavirus vaccines are part of an elite capitalist conspiracy. The latter is persistent and having real-world consequences. 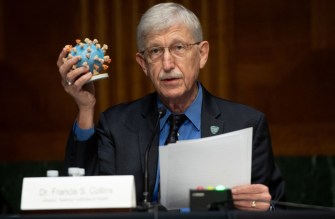 Dr. Francis Collins, Director of the National Institutes of Health (NIH), holds up a model of COVID-19, known as coronavirus, during a US Senate Appropriations subcommittee hearing on the plan to research, manufacture and distribute a coronavirus vaccine, known as Operation Warp Speed, July 2, 2020 on Capitol Hill in Washington, DC. Photo by Saul Loeb-Pool/Getty Images

Vaccine hesitancy in the UK is around 30 percent, according to Ahmed. In the U.S., he pegs it at 40 percent, though one poll found that only half of Americans are confident that they’ll get a vaccine (if one is created). Enter the danger: herd immunity is different for every virus, though certainly over 50 percent. Ahmed says that confusion over a COVID-19 vaccine could result in the loss of tens of thousands of lives.

As more people turn to social media for medical advice, Ahmed reminds us that platforms are part of the problem. You might think you’re doing a public service by debating your anti-vaxxer friend. In reality, you’re confirming algorithmic bias.

“The biggest mistake we’ve made is thinking that public opinion will change their views. Facebook and Twitter and Instagram and Google don’t care about your opinion, because you’re not their customer. You’re their product.”

Change agents target weak points, such as advertisers. Ahmed suggests a ruthless, sustained push, similar to the orchestrated effort that resulted in hundreds of brands pulling advertising from Facebook and Instagram. This month-long boycott is over unenforced hate speech policies.

Far from bucking the system, anti-vaxxers are fueling the capitalist greed they claim to decry. Discussing anti-vaxx sentiments, Eula Biss writes in “On Immunity” that, “wealthier nations have the luxury of entertaining fears the rest of the world cannot afford.” She compares vaccine refusal as a form of civil disobedience to the trappings of capitalism: anti-vaxxers are more like the 1 percent than the 99 percent. They’re looking out for their own self-interest instead of the good of the herd, relying on propaganda promoted by wealthy donors with vested interests as their “research.”

This coalition of chaos, in cahoots with the platforms they fund, is capitalizing on vaccine disinformation. The farther from science they lead us, the better. The more enraged we become, the more attention they capture, which is where this new economy thrives.

Tags
DisinformationMisinformationSocial mediaTechnology companiesVaccine researchVaccines
In this article
DisinformationMisinformationSocial mediaTechnology companiesVaccine researchVaccines
Related
Neuropsych
We need boredom to live better lives. But social media is destroying it
When boredom creeps in, many of us turn to social media. But that may be preventing us from reaching a transformative level of boredom.
High Culture
Could letting social media users rank accuracy help stop misinformation?
People naturally judge fact from fiction in offline social settings, so why is it so hard online?
Health
What is brown noise? Can this latest TikTok trend really help you sleep?
Brown noise, the better-known white noise, and even pink noise are all sonic hues.
Thinking
A “psychological vaccine”: Why prebunking is the best way to fight misinformation
By exposing people to small doses of misinformation and encouraging them to develop resistance strategies, “prebunking” can fight fake news.
The Present
Negative, emotionally manipulative news headlines have skyrocketed since 2000
The media is deliberately pushing your buttons.
Up Next
The Present
How face masks are fooling facial recognition software
A new study explores how wearing a face mask affects the error rates of popular facial recognition algorithms.