Elon Musk’s Neuralink has a straightforward outlook on artificial intelligence: “If you can’t beat em, join em.” The company means that quite literally — it’s building a device that aims to connect our brains with electronics, which would enable us, in theory, to control computers with our thoughts.

But how? What material would companies like Neuralink use to connect electronics with human tissue?

One potential solution was recently revealed at the American Chemical Society’s Fall 2020 Virtual Meeting & Expo. A team of researchers from the University of Delaware presented a new biocompatible polymer coating that could help devices better fuse with the brain.

One major problem with implanting any kind of device into the body is scarring. Materials like gold, silicon, and steel tend to damage tissue when implanted. That’s why David Martin, an associate dean at the University of Delaware’s College of Engineering, and his colleagues have spent years studying a polymer called poly(3,4-ethylenedioxythiophene), or PEDOT. 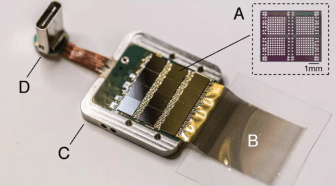 “We started looking at organic electronic materials like conjugated polymers that were being used in non-biological devices,” Martin said in a press release. “We found a chemically stable example that was sold commercially as an antistatic coating for electronic displays.”

PEDOT has already helped to improve the performance of medical implants, by lowering impedance without causing excessive scarring. Martin and his colleagues have been working on specializing PEDOT to allow for unique functions. Recently, the team added an antibody to the polymer that can detect when blood vessel growth hormones are attacked by a tumor — a technology that could serve as a breakthrough diagnostic tool in the future.

“Name your favorite biomolecule, and you can in principle make a PEDOT film that has whatever biofunctional group you might be interested in,” Martin told Inverse.

By tweaking polymer coatings in similar ways, scientists like Martin could help to advance the field of brain-machine interfaces. The team hopes to next research how these specialized polymers behave in living organisms.

“Recently there have been a number of big players like Glaxo Smith Kline and Elon Musk’s Neuralink get into the game; the technology is now rapidly evolving and it is clear there are going to be some remarkable future developments,” Martin said. “The ability to do the polymerization in a controlled way inside a living organism would be fascinating.”

As for Neuralink, Musk said the company would issue an update this month. Company spokespeople have said the technology’s first applications will be for medical purposes.

Innovation training encourages the kind of creativity and problem solving that can lead to breakthroughs in business.
The Present

Short-hop regional flights could be running on batteries in a few years.
Up Next
Starts With A Bang

What To Do, Scientifically, When Everyone Is Wrong

This chart, from around 1660, shows the signs of the zodiac and a model of the solar system with Earth at the centre. For decades or even centuries after Kepler […]