Elon Musk’s Neuralink is getting closer to its wildly ambitious goal of building a machine that links our brains to computers. This “brain-machine interface” would first be used for medical purposes, like helping paraplegics walk or treating degenerative diseases.

But the endgame is for humans to achieve “good AI symbiosis.” Why? To Musk, the future of AI poses a serious existential threat to humanity, even more so than nuclear weapons. So, “if you can’t beat em, join em,” as the tech mogul said in 2017.

Neuralink’s demonstration on Friday showed it’s making progress on its brain-machine interface, but still has a ways to go. Here are three highlights from the event.

The location of a Neuralink implant in a human skull. Credit: Neuralink / Big Think

At the demonstration were three pigs in pens. One pig, named Gertrude, has been living healthily for two months with the implant in its skull, according to Musk. As Gertrude snuffled around the pen, a screen displayed real-time spikes in neural activity coming from the pig’s brain.

“We have a healthy and happy pig, initially shy but obviously high energy and, you know, kind of loving life, and she’s had the implant for two months,” Musk said.

The coin-sized implant was read-only, meaning Gertrude wasn’t using it to control any device. But the demo showed that the implant was capable of wirelessly relaying neural data to external computers. What’s more, a pre-recorded video unveiled at the event showed that Neuralink was able to predict the pig’s limb movements with “high accuracy” during a treadmill experiment.

Musk also said Neuralink had implanted a chip into another pig, Dorothy, and then removed it without health complications.

“What Dorothy illustrates is that you can put in the Neuralink, remove it, and be healthy, happy and indistinguishable from a normal pig,” Musk said.

“The future is going to be weird,” Musk said. “In the future you will be able to save and replay memories […] You could basically store your memories as a backup and restore the memories. You could potentially download them into a new body or into a robot body.”

“This is increasingly sounding like a Black Mirror episode,” Musk said, referring to the dystopian TV show. 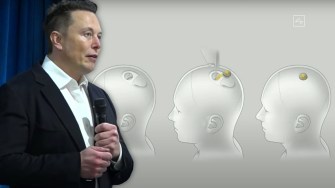 The location of a Neuralink implant in a human skull.Credit: Neuralink / Big Think

Musk said Neuralink eventually wants to use a surgical robot to install the interfaces into human skulls. Neuralink has so far used robots to implant all of its chips, but these experiments have been limited to rodents, monkeys and pigs, according to Musk.

Neuralink hasn’t revealed how much the procedure might cost for humans in the future. Musk said it’ll be “quite expensive” at first, but hopes the price will eventually drop to a few thousand dollars.

“I think it should be possible to get it similar to Lasik,” he said.

Of course, Neuralink still faces many safety concerns and regulatory hurdles. But in July, the company received FDA Breakthrough Device designation, which expedites approval for technologies “that provide for more effective treatment or diagnosis of life-threatening or irreversibly debilitating diseases or conditions.”

The next major step for the company will be demonstrating that its technology works safely and effectively in humans. In 2019, Musk said he hopes to begin human testing by the end of 2020, though it’s unclear whether that’ll happen.

There are two kinds of suffering. One is pure pain. The other makes life worth living.
▸
6 min
—
with
Paul Bloom
The Present

One home was printed in 28 hours. Now, Alquist 3D is building 200 more.
Health

Sir Ken Robinson died on August 21 of cancer at the age of 70.