In 1861, Reverend M.R. Watkinson pleaded with U.S. Secretary of the Treasure, Salmon Chase, to mint American money with the term, “In God We Trust.” The Pennsylvania minister believed that America’s separation of church and state was a disgrace. Three years later, all two-cent bronze pieces bore the slogan; other coins soon followed.

Ninety years later, President Eisenhower and Vice President Nixon helped add “under God” to Francis Bellamy’s 1892 secular tribute, the Pledge of Allegiance. Congress officially adopted the pledge in 1942. A dozen years later, on Flag Day, the accolade to a higher power was added. That same year the phrase, “In God We Trust,” was first printed on U.S. postage stamps. In 1955 the term was added to paper money; a year later it became the nation’s first official motto.

Although the First Amendment calls for the separation of church and state, the Eisenhower administration pushed hard to ensure that God was at the forefront of government transmissions. While every clause of the First Amendment has been challenged in some capacity, nothing has created as much longstanding tension and debate as religion. To this day, many Americans believe that we live in a Christian nation—that such a reality should be as obvious as Judaism in Israel.

One of the latest groups to push this agenda is Project Blitz, a coalition of Christian right groups founded by former Republican congressman, Randy Forbes. The Virginia representative served from 2001-17 in the state’s 4th congressional district, having spent the previous term in the Virginia Senate. He’s also served as Chairman of the Republican Party of Virginia and founded the Congressional Prayer Caucus Foundation (CPCF), a group that claims to have a network of 950 state legislators in 38 states.

Project Blitz is, first and foremost, political. The group specifically creates legislation that, according to Mr. Forbes, “protect the free exercise of traditional Judeo-Christian religious values and beliefs in the public square, and to reclaim and properly define the narrative which supports such beliefs.”

In 2018, 70 Blitz-backed bills were considered in state legislatures; 25 were introduced. These bills include refusing adoption to adults based on faith and mandating that public schools include “In God We Trust” on signage, as well as teach from the Bible. There are also anti-LGBT measures on tap—226 this year alone. One tactic favored by the Blitz is to brand opponents of their legislation as being against the freedom of religion.

On its website, CPCF has a series of toolkits that offer guidance to help “advance a God-honoring culture in our communities and nation.” The goal is to identify the political landscapes of states by pinpointing “anti-faith” and “pro-faith” groups in various districts. The Blitz can then focus on districts susceptible to its agenda.

Frederick Carlson works as a senior research analyst at a think tank that studies right-leaning political groups. He expresses consternation over the fact that a political organization brazenly announces its intentions in plain sight, referencing the founding document of CPCF.

“It’s very rare that you come across a major primary source document that changes the way you view everything, and this is one of those times. This is a 116-page strategy manual hidden away on a website explaining at least what a section of the religious right are doing in the United States. To me that’s astounding.” 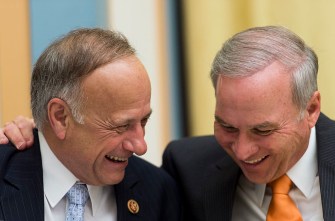 Rep. Steve King, R-Iowa, left, and Rep. Randy Forbes, R-Va., talk before the start of the House Judiciary Committee hearing on “Oversight of the United States Department of Homeland Security” on Thursday, May 29, 2014.

The Blitz’s signature tactic, according to Rachel Laser, the president of Americans United for the Separation of Church and State, is to start small with signage in public places. Ascending levels of religiosity follow, such as denying homosexual couples the same rights as heterosexuals. The ultimate goal, she says, is to codify Christian principles into the American government.

The First Amendment, Laser continues, does not allow you to play favorites. You cannot favor the agendas of a particular religion over others. That goes directly against the separation of church and state.

The Blitz has no intention of slowing down. The current administration appears particularly willing to cater to bills being pushed forward by CPCF and related organizations. For example, right now there are nine Blitz-backed bills being considered in Iowa. These include putting mottos like “In God We Trust” and “endowed by their Creator” in every public school throughout the state. Meanwhile, Blitz-backed anti-transgender proposals were or are being introduced in ten states.

Project Blitz is part of a very long game: to so familiarize the American public with debates over signage that we fail to recognize that the goalposts are constantly being moved. As Princeton history professor, Kevin Kruse, writes in his book, “One Nation Under God,” “touchstones of religious nationalism have only become more deeply lodged in American political culture over time, as the innovations of one generation became familiar traditions for the next.” What is first presented as innocuous, commonsense even, can soon transform a nation. The gap implied by “separation” is closed by inches, not miles.

Tags
christianitygovernmentpoliticsreligionreligious discriminationTransgender
In this article
christianitygovernmentpoliticsreligionreligious discriminationTransgender
Related
Starts With A Bang
Science won’t ever make philosophy or religion obsolete
The information we have in the Universe is finite and limited, but our curiosity and wonder is forever insatiable. And always will be.
Thinking
Trimurti: Meet the “Holy Trinity” of Hinduism
Hinduism emphasizes the journey, whichever path that takes. And it holds us responsible for our own self-improvement.
Culture & Religion
3 reasons “you” won’t return after this life
The idea that “you” persist after death does not hold up to the current understanding of memory and identity.
The Past
No, Christmas is not a stolen pagan festival. There are 3 problems with that argument
“The Da Vinci Code” popularized the idea that Christians stole much of their theology. It’s wrong, especially regarding Christmas.
Neuropsych
Psychedelics alter users’ beliefs about God, reality, and superstition
Belief in God and the afterlife increased, while belief in superstition decreased.
Up Next
Starts With A Bang
Flaremageddon: How Satellite Mega-Constellations Could Create A New Natural Disaster
With tens of thousands of satellites requiring AI-control to avoid collisions, a single solar flare could everything.Over the next few years, the night sky and the volume of space that […]