You’ve probably heard it expressed once or twice, by some political pundit or another, that America was founded on Christian principles.

While these sentiments have been floating around American political discourse for a while, under the Trump administration they have become more aggressive. Earlier this month, for instance, President Trump, Attorney General William P. Bar, and Secretary of State Mike Pompeo all spoke publicly on the role of Christianity in American life and politics.

A new book by constitutional attorney Andrew Seidel, ‘The Founding Myth: Why Christian Nationalism Is Un-American,’ challenges that notion in arguably the most comprehensive take down yet of what he calls “Christian nationalism.”

What is Christian Nationalism?

Seidel, an attorney at the Freedom From Religion Foundation, defines Christian nationalism as the belief that the United States was founded as a Christian nation on Christian principles, and most importantly, that the nation has strayed from that original foundation.

It is this language of redemptive Christian nationalism, according to Seidel, that is used to justify recent policies such as immigration policy that banned immigration from Muslim majority countries, government funded voucher school programs, the child separation policy at the border, opposition to LGBTQ rights, environmental deregulation, the evisceration of women’s reproductive rights, and Project Blitz – an overt Christian nationalist push to rewrite American law.

According to Seidel, the aim of certain politicians is to wipe away the regressive aspects of these policies by incorrectly claiming they align with America’s Christian heritage.

“The political theology of Christian nationalism, their very identity, is dependent upon a common well of myths and lies,” he says. “Without the historical cover that the lies give, their policy justifications crumble.”

Common myths he points to include American verbiage such as “One nation under God” and “In God We Trust.” The former was added to the Pledge of Allegiance in 1954 and the latter was not required on currency until 1956. The original motto the founders suggested was the Latin phrase E pluribus unum, which translates to “Out of many, one.” Other untruths are that the Declaration of Independence references Jesus multiple times, that the founders prayed at the Constitutional Convention, and that our laws were based on the Ten Commandments.

But Seidel’s book goes beyond gently correcting historical inaccuracies spewed by Christian nationalists, pointing out that correction is not enough at this political moment. He makes the claim that America’s foundation is in direct opposition of the principles found in the Bible.

“Pointing out errors is no longer sufficient,” says Seidel. “This book does that, but it takes the next step. It goes on the offensive. This book is an assault on the Christian nationalist identity. Not only are Christian nationalists wrong, but their beliefs and their identity run counter to the ideals on which this nation was founded. They are un-American.” 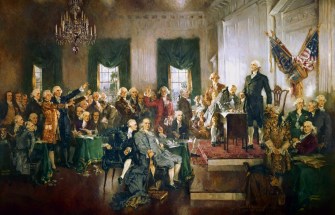 The central question that Seidel sought to answer was: Did Judeo-Christian principles positively influence the founding of the United States of America?

“The answer to that is no, America was not founded on Judeo-Christian principles, and it’s a good thing because those principles are fundamentally opposed to the principles on which this nation was built,” argues Seidel.

For example, there is a common misconception that America’s legal system is based on the Ten Commandments. He devotes an entire chapter of the book to rigorously debunking the myth commandment by commandment.

“When you crack open a bible and read those it becomes very obvious that they are fundamentally opposed to American values and founding principles,” says Seidel, who points to commandment number one: I am the Lord your God, you shall have no other gods before me. “It would be very difficult to write a sentence that is more fundamentally opposed to our First Amendment than the First Commandment.”

Another founding myth that has prevailed is the story of the Pilgrims and Puritans arriving in the New World seeking religious liberty. It isn’t exactly true.

First, they fled to Leiden in the Netherlands, one of the (inconveniently) freest, most tolerant countries in Europe. The religious freedom there posed a bit of a problem for the Puritans according to Seidel, who says that the followers were exercising their freedom and leaving the faith. It led the church fathers to conclude that they needed to find a new land where they could use the secular law to impose religious law.

“[That’s] why they came to the New World,” says Seidel. “Not for religious liberty, but seeking the ability to establish tiny theocracies in New England. When the founders looked at that earlier history, they looked at it as an example of how not to build a government.” Ultimately, ‘The Founding Myth’ is an aim to take away the exclusivity that Christian nationalists attribute to being an American.

“Patriotism has no religion,” says Seidel. “There’s no such thing as the freedom of religion without a government that is free from religion. America’s unique contribution to political science is the wall of separation between state and church. That had never been done before. That is an American original.”

This is something that he says we should be proud of, rather than seeking to undermine with myths about a Christian founding. We also, he mentions, should remind Americans that our Constitution demands the absolute separation of church and state.

“We have to raise hell whenever that wall between state and church is breached,” says Seidel “This is not a Christian nation. Our Constitution does not belong to the Christians. It belongs to we the people, all of the people. And it’s about damn time we start acting like it.”

All roads may not lead to Rome, but many of them lead to wealth and prosperity — even 1,500 years after the fall of the Roman Empire.
Up Next
Neuropsych