After the U.S. began battling the coronavirus in February, it didn’t take long for Americans to make the battle part of the culture war. The left, in general, framed mandatory shutdowns and precautionary behaviors as a moral duty, while parts of the right viewed these reactions not only as overreactions, but as a threat to freedom, coming from untrustworthy sources.

But why? What are the forces or ideas causing so many Americans to behave in ways that are demonstrably exacerbating the spread of COVID-19?

To better understand, some pollsters have examined not only Americans’ political views, but also their religious attitudes. The results have suggested that religious Americans — in particular, white evangelicals — are less likely to practice precautionary measures, like mask-wearing and social distancing.

But a new study argues that looking at broad religious attitudes only offers part of the picture.

Published in the Journal for the Scientific Study of Religion, the study suggests that the far right’s behavioral response to the pandemic is largely shaped by Christian nationalism, which they define as “an ideology that idealizes and advocates a fusion of American civic life with a particular type of Christian identity and culture.”

Christian nationalism is generally characterized as fundamentalist, exclusivist, and supportive of ultra‐conservative ideals, according to the researchers. The ideology includes several key components: 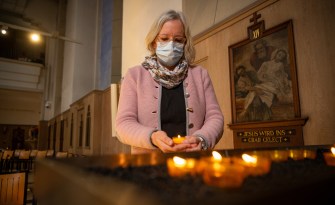 A pastor at the chapel of the St. Josef Hospital on April 1, 2020 in Bochum, GermanSascha Schuermann/Getty Images

Christian nationalists, in general, believe the U.S. and God’s will are tied together, and they want the government to embody conservative Christian values and symbols. As such, they also believe the nation’s fate depends on how closely it adheres to Christianity.

“Unsurprisingly then, in the midst of the COVID‐19 pandemic, conservative pastors prophesied God’s protection over the nation, citing America’s righteous support for President Trump and the prolife agenda,” the researchers write.

“Correspondingly, the link between Christian nationalism and God’s influence on how COVID‐19 impacts America can be seen in proclamations about God’s divine judgment for its immorality―with the logic being that God is using the pandemic to draw wayward America back to himself, which assumes the two belong together.”

The logical conclusion to this kind of thinking: America can save itself not through cautionary measures, like mask-wearing, but through devotion to God. What’s more, it stands to reason that Christian nationalists are less likely to trust the media and scientists, given that these sources are generally not concerned with promoting a conservative, religious view of the world.

(The researchers note that they’re unaware of any research directly linking Christian nationalism to distrust of media sources, but that they’re almost certain the two are connected.) 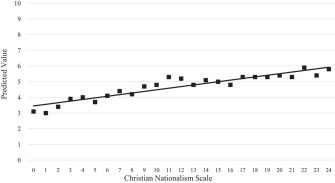 Predicted values of Americans’ frequency of incautious behaviors during the COVID‐19 pandemic across values of Christian nationalismPerry et al.

In the new study, the researchers examined three waves of results from the Public and Discourse Ethics Survey. One wave of the survey was issued in May, and it asked respondents to rate how often they engaged in both incautious and precautionary behaviors.

To measure Christian nationalism, the researchers asked respondents to rate how strongly they agree with statements like “the federal government should advocate Christian values” and “the success of the United States is part of God’s plan.”

The results suggest that, compared to other groups, Christian nationalists are far less likely to wear masks, socially distance and take other precautionary measures amid the COVID-19 pandemic.

But that’s not to say that religious beliefs are causing Americans to reject mask-wearing or social distancing. In fact, when the study accounted for Christian nationalist beliefs, the results showed that Americans with high levels of religiosity were likely to take precautionary measures for COVID-19.

Still, the researchers note that they’re theorizing about the connections between Christian nationalism and COVID-19 behaviors, not documenting them directly. What’s more, they suggest that certain experiences — such as having a family member that contracts COVID-19 — might change a Christian nationalist’s behaviors during the pandemic.

“Limitations notwithstanding, the implications of this study are important for understanding Americans’ curious inability to quickly implement informed and reasonable strategies to overcome the threat of COVID‐19, an inability that has likely cost thousands of lives,” they write.

Tags
christianitycoronavirusCOVID-19religionunited states
In this article
christianitycoronavirusCOVID-19religionunited states
Related
Starts With A Bang
Science won’t ever make philosophy or religion obsolete
The information we have in the Universe is finite and limited, but our curiosity and wonder is forever insatiable. And always will be.
Thinking
Trimurti: Meet the “Holy Trinity” of Hinduism
Hinduism emphasizes the journey, whichever path that takes. And it holds us responsible for our own self-improvement.
Culture & Religion
3 reasons “you” won’t return after this life
The idea that “you” persist after death does not hold up to the current understanding of memory and identity.
The Past
No, Christmas is not a stolen pagan festival. There are 3 problems with that argument
“The Da Vinci Code” popularized the idea that Christians stole much of their theology. It’s wrong, especially regarding Christmas.
Neuropsych
Psychedelics alter users’ beliefs about God, reality, and superstition
Belief in God and the afterlife increased, while belief in superstition decreased.
Up Next
The Present
Two-thirds of parents say technology makes parenting harder
Parental anxieties stem from the complex relationship between technology, child development, and the internet’s trove of unseemly content.