We are living in an extremely polarizing time in politics. With an American president that you either wildly support or vehemently oppose, and a world that’s been pushed to the brink in more ways than one in the last few years, it’s no surprise that conversations about politics could lead to make or break moments in budding new romances.

Sex and politics have been closely linked for a long time.Photo by 3dfoto on Shutterstock

From the extremely public disagreements between White House advisor Kellyanne Conway and her husband, to the tense argument you and your partner had on voting day, politics can be a breaking point for any relationship.

Sex and intimacy provide a strong driving force for humans that reaches far beyond the confines of the bedroom. Our personal relationships influence our behaviors, our thoughts, our motivations, and our even our political opinions, to some extent.

If your sexual preferences align, your political values might, too.

According to this 2017 study, traditional behaviors in the bedroom (what some might deem to be “vanilla” sex) can be closely related to more conservative orientations, whereas more adventurous sexual endeavors can suggest more liberal ideas.

Whether you’re swiping right or scrolling through, it can be hard to find a match who’s values and opinions are in line with yours. While some minor disagreements and conflicts can actually be healthy in a relationship, pairing up with someone who has opposing political views might just mean you have two very different sets of morals that may not bring out the best in each other.

Defining dating expectations allows you to see how important political views are in the beginning of a relationship.

According to a study released by It’s Just Lunch, 50 percent of single men and women stated that dating someone with opposing political views was fine for short-term relationships but would not be ideal for long-term commitments.

If you’re looking for something casual and fun, perhaps politics doesn’t need to play as big of a role as it would if you were swiping right to find a long-term relationship.

Navigating politics and relationships is more difficult now than ever before.

That same study by It’s Just Lunch has around 40 percent of men and women claiming they believe it’s “too risky” to bring up politics on a first date.

It’s not just dating website studies – therapists around the world are struggling to defuse politically-charged landmines in relationships. Gary Brown, Ph.D. and licensed marriage therapist explains to Women’s Health Magazine that now more than ever we are living in such an intense political climate that it is undoubtedly causing tension not just in romantic relationships but in friendships and among colleagues as well.

“It’s everywhere,” Brown explains. “I can’t remember a time, not even during the Vietnam war, where there was as much venom and animosity as there is now. Even people who deeply love each other are falling victim to the ‘politics of personal destruction’, where it’s not enough to disagree with someone but you have to destroy them and everything they stand for in the process.” 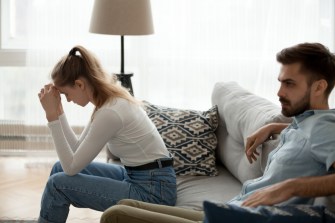 Polarizing political views can be a deal-breaker – here’s how to navigate the topic of politics on a date.Photo by fizkes on Shutterstock

“During a time where we are surrounded by politics, it is important to look at the impact that it has on the online dating industry,” Vice President of Dating.com, Maria Sullivan, explains. “We have seen a huge increase in political terms being added to user profiles.”

According to the study, 72 percent of singles would rather you flaunt that you voted at all (rather than who specifically you voted for) in your bio. More than half the participants surveyed said that bringing up a discussion about politics too early can be a huge turn-off.

So how do you make sure you make your view known while not being too pushy about the subject too early on?

Use non-confrontational language and keep things vague in the beginning. If voting is important to you, make that known and suggest that you’re open to talking politics with anyone who is interested.

Choose the right time. Perhaps the first words you say shouldn’t be an accusatory statement about who they voted for and why. Bringing up political views is an important test to see if the match is right, but choose the right time to insert politics into the conversation.

Be open-minded (or respectful, at the very least). While you may have a hard stance on your political views (as many people do), being respectful of other people’s opinions is often the best approach and the thing that might open the conversation up in a healthy way.

“This is much deeper than just ‘let’s figure out how we can get both sides to get along.’”
▸
15 min
—
with
Ian Bremmer
Health

Social media isn’t the majority – it’s the vocal fringe.
▸
with
Todd Rose
Up Next
Neuropsych

Living with ADHD: how I learned to make distraction work for me

Could better teaching practices make paying attention easier for everyone?