A new nonpartisan poll of Americans under 40 finds they want serious reforms in the American political system. The survey, conducted by the University of Massachusetts Lowell, showed great support for expanding the Supreme Court, terms limits, and abolishing the electoral college.

In particular, the researchers looked at opinions from 1,503 people between 18 and 39 years old, representing millennials – those born from early 1980s to mid-1990s, and the succeeding Generation Z – those born in the mid-to-late 1990s until early 2010s. Overall, most everyone agreed that the political system is quite broken, with only 24 percent having trust in the government. Interestingly, millennials appear more liberal-minded and want reforms more than the younger cohort.

Political science professor John Cluverius, associate director of the UMass Lowell Center for Public Opinion, which carried out the poll, sees a correlation between the views of the younger Americans and the politics in the run-up to the 2020 elections:

“It’s no coincidence that as Joe Biden’s lead has grown in the polls, the more comfortable Americans are with expanding the size of the Supreme Court,” said Cluverius in a press release. “As the chance of Trump holding a second term and appointing more justices dwindles, the opposition to court-packing dwindles as well. Saying Americans are opposed to expanding the court used to be conventional wisdom; now it’s a commonly held misconception.” 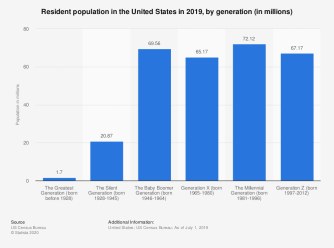 On the issues of social justice and the Black Lives Matter movement, the poll found 8 percent fewer overall saying that Black people are treated less fairly than whites, in contrast to a similar poll from August. Forty-three percent of the respondents had such opinions, with Gen Z’ers leading in this belief at 54 percent.

Joshua Dyck, director of the Center for Public Opinion and associate professor of political science, commented that the ideological divide didn’t break down in an expected way:

“What I find most interesting is that it is not always the youngest Americans who espouse the most liberal viewpoints,” he shared.” Here we see millennials, the oldest of whom are about to turn 40, as the driving force behind the vision for a more progressive future.”

The poll also revealed that the vast majority of Gen Z (84 percent) and millennial (85 percent) responders are very likely to believe that human activity contributes to climate change. They also think the U.S. government has not done enough to combat it, with 64 percent of Gen Z’ers and 65 percent of millennials holding such views.

Americans under 40 are also largely in favor of canceling all student loan debt, with 66 percent of Generation Z and 66 percent of millennials supporting. In a telling comparison, the older generations are less on board, with Gen X’ers (those born from mid-60s to early 1980s) split, with 51 percent favoring the idea. Only 38 percent of the Baby Boomers (born 1946-1964) and 31 percent of the Silent Generation (born 1928 to 1945) back the notion.

Check out the detailed results of the poll.

Paradoxically, we lose wars because the world is peaceful and the U.S. is powerful.
Up Next
Starts With A Bang

What Would We Experience If Earth Spontaneously Turned Into A Black Hole?

If a black hole were to appear between the Earth and an observer, the Earth would appear gravitationally lensed in a fashion similar to this, dependent on the Earth’s position […]