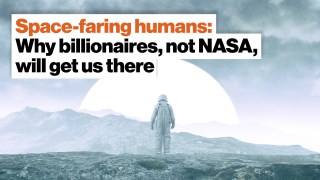 Mega-rich entrepreneurs are taking us where no human being has gone before.
▸
3 min
—
with
Michio Kaku

MICHIO KAKU: During the first golden era of space exploration, we went to the Moon. Then we sort of dropped the ball. For 50 years, we've been basically spinning wheels around the planet Earth. However, now we have the infusion of funds from Silicon Valley billionaires. We have new energies, new strategies, new plans to go back into outer space. And things have changed; new parties have entered into the game. And so I say we're entering the second golden era of space exploration.

Some people are a little bit hesitant to pass the baton to private enterprise, because, of course, private enterprise is, well, for a profit, by definition. Not to mention the fact that there are egos involved. And some people would like to go back to the old days of NASA. The problem is space travel is potentially very expensive, especially the way governments do space travel. It costs $10,000 to put a pound of anything into orbit around the planet Earth; just $10,000 to put a book going around the planet Earth in outer space. That's why we need to have an infusion of public and private funds. And that's where Elon Musk, Jeff Bezos, and Google billionaires come into the picture. And of course, let's be honest about it: They're not in it to just wave the American flag. They're in it for a profit. They're in it for ego. Also, they're in it for a vision. And that's what's different. You see, back in the 1960s, the vision was: Beat the Russians, beat the Russians. That was our vision. Well, we did it. We scored a touchdown, and we took our football and went home.

Now we have a new vision. First of all, Elon Musk read Isaac Asimov's Foundation series, as I did as a child, and was thrilled by the idea of creating a multi-planet civilization, a civilization that spans the galaxies. Because, of course, you have to realize that the dinosaurs did not have a space program. That's why there are no dinosaurs in this room right now. How come there are not any dinosaurs here? Because they didn't have a space program. And that's why Elon Musk wants to create a space-faring civilization. And then we have Jeff Bezos of Amazon. He has a vision too. He wants to make the earth into a garden; heavy industry goes into outer space. Pollution goes into outer space, while the earth is kept as a park, as a celestial garden, as a jewel in the heavens. So he has a vision.

Now, NASA, of course, today, unfortunately, has no vision. And of course, you can't expect any more, because, of course, they are publicly funded, they have tremendous amounts of bureaucracy to take care of, many regulations to obey. And that's why the SLS booster rocket is already way over budget, has so many cost overruns, that it may never fly at all.

“Some people swear their houseplants are conscious.”