Since the first kidney was successfully transplanted in 1954, organ donations have saved millions of lives. But this modern miracle is a zero-sum savior. The lives that can be prolonged are directly limited by the number of organs available, and ever-growing donor lists have outpaced that number. Only 3 deaths in a 1,000 result in organs capable of being donated, and less than two-thirds of U.S. adults are registered donors.

We can certainly do more to ensure a healthy supply of donor organs, but some factors will always remain out of our control. That is, unless we can simply make them. That suggestion may sound more alchemical than scientific, but thanks to technological ingenuity, it could one day be a genuine option for surgeons and their patients.

We spoke with Rich Boling and Eugene Boland, vice president and chief scientists of Techshot, an Indiana-based company hoping to make that option a reality with its proprietary bioprinter. And the company is heralding this future from—where else?—space! 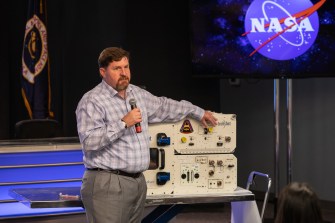 As it says on the tin, a bioprinter is a device that fabricates living structures using biological materials and super-fine needlepoints. Those materials are provided through a substance known as bioink. As Boland explained, bioinks are a combination of cells, proteins, sugars, and other nutrients and small molecules. Everything a budding human tissue needs to grow.

The first described bioprinting systems came about in the early 2000s. Since then, bioprinters have seen some success in manufacturing bone and cartilage, the harder human tissues. The softer tissues that make up human organs, however, have proven more difficult. Because of their low viscosity, these soft biomaterials collapse after being printed—Earth’s gravity tearing them apart under their weight. Think of a microscopic Jell-O mold that hasn’t set properly.

To get around this, Boland noted, earthbound scientists must add thickeners or scaffolding to their test prints. “You’re adding something to it, to make it thicker, to get a better Jell-O mold. To do the same thing when you’re bioprinting, you’re adding a foreign material to it to increase its thickness or its viscosity to make it stand up on its own.” But such foreign materials aren’t part of a body’s natural processes. They prevent cells from migrating through them, inhibiting cellular mobility as well as cells’ ability to remodel or adapt to their natural environment.

This is the reason Techshot sent its bioprinter, the 3D BioFabrication Facility (BFF), to space. It wasn’t for the sci-fi luster—though, that is a cool fringe benefit. Rather, it was to escape Earth’s cell-shearing gravity to try bioprinting soft human tissue in a microgravity environment.

In partnership with nScrypt, Techshot developed the BFF to manufacture human tissue in space. In July 2019, they launched the bioprinter aboard the SpaceX CRS-18 cargo mission to be delivered to the International Space Station. There, it was loaded up with nerve, muscle, and vascular bioinks. As the BFF pinned the cells together in a culturing cassette, generating layers several times thinner than a human hair, the microgravity environment ensured the low-viscosity structure kept together. That’s courtesy of the same surface tension property that allows for those moving water spheres astronauts love to play with.

A non-cellular ink was added to the mix to provide a bit of framework and prevent cells from sliding around during the printing process. But because Earth’s gravity had less pull, this framework didn’t need to be as ridged as terrestrial scaffolding. This non-cellular ink was water-soluble, meaning it could be washed away after the printing was complete. The end result, a more natural fabrication of human tissue.

Once 25 percent of the cells needed for the mature tissue were in place, the cell-culturing cassette was moved to another payload, the Advanced Space Experiment Processor (ADSEP). There, the cells lived and grew as they would naturally. Fully differentiated cells signaled to the adult stems cells that they should be heart cells. The stem cells grew and multiplied, supported by the nutrients provided in the ink. A few weeks later and the cassette was home to human heart tissue.

This January, Techshot announced the BFF had cultured successful test prints aboard the ISS. These heart prints measured 30 mm long by 20 mm wide by 12.6mm high. In a follow-up experiment, the BFF also manufactured test prints of a partial human knee meniscus, the soft cartilage that acts as a shock absorber between your shinbone and thighbone. 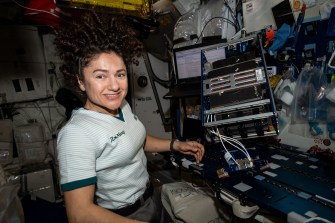 For its next run, Techshot wants to improve the cell-culturing cassette, refining conditions and more effectively flushing out trapped air. Its researchers are also looking into making cells in orbit. Then there is the process of scaling up from test prints to functioning tissue pieces (say, heart patches) to fully operational organs. Then there are the challenges of space flight and the long road of regulation.

“We’re dedicated to the long haul here,” Boling said during our interview. “We have agreements with NASA that permit us to iterate and fly-and-try to continue and improve. We brought the BFF and ADSEP back from the space station late summer to make those improvements based on what we have learned so we can send it back up.”

Yet, the windfall goes well beyond shoring up our stock of donor organs. Bioprinting has the potential to dramatically advance the field of personalized medicine. For example, one danger of transplants is rejection by the host body. This happens when a recipient’s immune system views the life-saving tissue as a foreign invader and attacks it. About 40 percent of heart recipients experience acute rejection in the first year, requiring doctors to prescribe immunosuppressant drugs.

Crafting an organ from a patient’s personal stem-cell stock has the potential to reduce this risk. Replacement parts, such as heart patches, could also be patient-specific. Test prints could be constructed to analyze how a patient’s system responds to specific drugs and treatments, taking in vitro experiments out of the Petri dish and into a microenvironment more representative of the natural human body.

“Instead of the trial-and-error medicine of the 20th century, you’ll have the personalized medicine that has always been just around the corner. [This technology] may be an answer to that,” Boland said.

And we could take bioprinting farther into space. Boling foresees a future where the technology could travel with us to the Moon or beyond. There it could serve personalized pharmaceutical needs for stationed astronauts, or if paired with a Cell Factory, it could print meats made from bovine or pig cells. Ethical, yet potentially indistinguishable from its farm-raised counterpart.

We’ve come a long way since the 1950s. Many people are alive today thanks to what that first kidney transplant showed medical science. True, Techshot’s test prints are small compared to an entire human organ, with its complex and interconnected network of epithelial, connective, muscle, and nervous tissue. But if printing an organ is equivalent to urban planning a cellular city, then Techshot’s accomplishment is certainly the first of many skyscrapers toward that goal. That goal could be the proof on concept that saves many more.

Crows have their own version of the human cerebral cortex.