Living in microgravity aboard the International Space Station (ISS) might seem like it’d be gentle on the human body, but it’s not. Without gravity, the musculoskeletal system starts to atrophy because it no longer needs to support any weight. And even though regular exercise in space keeps astronauts in decent shape, bone and muscle loss remains a major health concern for long-term space missions.

A new study published in the Proceedings of the National Academy of Sciences suggests that targeting a specific signaling pathway in the body can help prevent bone and muscle loss in space.

The study involved sending 40 mice to the ISS for a month-long stay. Eight of the mice were missing the gene for myostatin, a protein known to inhibit muscle growth. Another eight mice were given a treatment that suppresses myostatin and the protein activin A, which also helps to regulate muscle mass. The rest of the mice (24) were left untreated as a control group. 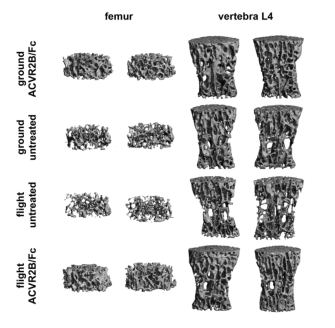 Upon return to Earth, the untreated mice showed significant losses in muscle mass and bone density. But the mice missing the myostatin gene retained almost all of their muscle and bone mass. What’s more, the mice that received the gene-inhibiting treatment actually gained bone and muscle mass. The researchers observed similar results among a separate group of mice that were given the same set of treatments on Earth.

“These findings show that blocking the activities of these hormones does work to enhance both muscle and bone even when mice are unable to bear weight,” study authors Se-Jin Lee and Emily L. Germain-Lee told CNN.

“One thing that we found somewhat surprising is how resilient mice are even when subjected to all of the stresses associated with space travel. We knew that mice had been sent to space in the past, but we still found it remarkable that after spending a month at the ISS, they seemed to resume normal activity very quickly after returning to Earth.” 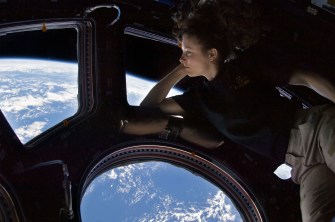 Treatments like these could protect astronauts on future long-term space missions. After all, studies show that spending just 16 to 28 weeks in space can cause a 3.5-percent loss in bone density, so space agencies are understandably concerned about the health risks of sending astronauts on a three-year mission to Mars.

The researchers also noted that “this strategy may be effective in preventing or treating muscle and bone loss not only in astronauts on prolonged missions but also in people with disuse atrophy on Earth, such as in older adults or in individuals who are bedridden or wheelchair-bound from illness.”

Still, the experiment was done on mice, so it’s not clear whether the treatment would have the same effects on humans. It’s also unclear what other side effects the treatment might have on humans. Answering these questions will take some time.

“We’re years away,” Germain-Lee told Phys Org. “But that’s how everything is when you go from mouse to human studies.”

Metabolism and mitochondrial functioning seem to have far more to do with mental health than many people might expect.
Up Next
Life

A new study bases its calculations on more than the great white shark.