In December, we reported on the imminent clean-up of space junk. With an estimated 129 million pieces of debris currently orbiting our atmosphere, one lucrative contract awarded by the European Space Agency will commence in 2025.

Four years is a long time, however, given the amount of junk we’ve allowed to float into space. It’s not the only issue affecting the crowded ether. New research, published in the Monthly Notices of the Royal Astronomical Society: Letters, has found that astronomers can no longer find anywhere on Earth to view the night sky free of space junk and satellite pollution.

Although the first satellite was only launched in 1957, as of the beginning of this year, 3,372 are now in orbit, alongside the aforementioned debris—what the research team from Slovakia, Spain, and the United States term “space objects” for sake of brevity. These objects range in altitude from a few hundred to over 35,000 kilometers.

These objects pose an immediate threat to researchers by compromising astronomical data. Space debris and satellites often appear as streaks of varying lengths and brightness in ground-based telescopes. And the problem is going to get worse, says John Barentine of the International Dark-Sky Association.

“It’s a bit of an eye-opener. As space gets more crowded, the magnitude of this effect will only be more, not less.” 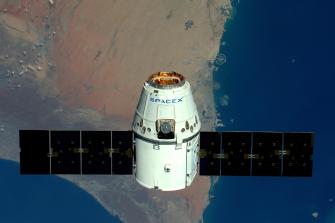 This handout image supplied by the European Space Agency (ESA), shows a view of The Palms, Dubai as the SpaceX Dragon spacecraft passes below, in an image taken by ESA astronaut Tim Peake from the International Space Station on April 10, 2016.Photo by Tim Peake / ESA/NASA via Getty Images

Plenty more is coming as the race for consumer travel heats up. SpaceX has already launched over 1,000 Starlink communication satellites as it builds a new global internet infrastructure. Last year, the FCC approved 3,236 Amazon satellites that will all be in orbit as part of the mega-constellation “Project Kuiper” by 2029. While these aren’t the only companies in the race to a global internet, SpaceX alone aspires to launch 42,000 satellites into space.

On Earth, we might enjoy faster internet speeds, but in observatories, researchers are concerned. Currently, scientists plan their observations around the orbit schedule of known objects. In a few years, the researchers of this letter write, that might prove impossible. An exponential increase in satellites will likely guarantee streaks in every telescope across the globe.

Slovakian astronomer Miroslav Kocifaj, part of the team behind this new research, believes this logjam in space could create such an intense background glow that we’ll no longer be able to gaze out into the farthest reaches of space.

His team points to the 1979 resolution of the International Astronomical Union, which stated observatories should only be built in regions where light pollution adds less than 10 percent more light than normal skyglow. While they point out that “natural skyglow” is a debatable term, they’re also concerned that the ambitious plans of private companies will ensure that nowhere will come in under that number. As the team writes:

“These results imply that diffuse night sky brightness produced by artificial space objects directly illuminated by the Sun may well have reached nowadays, and perhaps exceeded, what is considered a sustainability ‘red line’ for ground based astronomical observatory sites.”

Just at the moment when we’re reaching further into the cosmos, we seem to be boxing ourselves in. For millennia, we’ve started into the night sky and dreamed about the stars. Soon, it seems those dreams will be aimed at the junk we’ve placed there.

For the very first time, an AR contact lens was worn on the eye of a human subject. And it has about 30 times the pixel density of an iPhone.
Starts With A Bang

Sick of remembering a random string of letters, numbers, and special characters?
Starts With A Bang

If you hate your job, blame the Agricultural Revolution

Hunter-gatherers probably had more spare time than you.