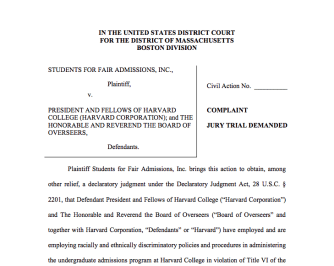 A highly anticipated lawsuit that challenges the consideration of race in Harvard University’s admissions practices is set to begin Monday in a Boston federal court.

The case, brought by a group of Asian Americans rejected by the university and a nonprofit conservative group called Students for Fair Admissions Inc., argues the university has discriminated against Asian American students by limiting the number of such students it admits. (Read the organization’s formal complaint here.)

Harvard denies the claims, pointing out that Asian American admissions at the university has risen since 2010. However, the plaintiffs point to allegedly unfair practices within the university’s comprehensive admissions process, which assigns scores to each student based on factors like grades, athleticism, and a more ambiguous “personal” rating that the school measures through applicants’ essays, interviews and teacher recommendations.

The plaintiffs note that Harvard assigned the lowest personal score ratings to Asian American students even though these students received the highest academic scores. 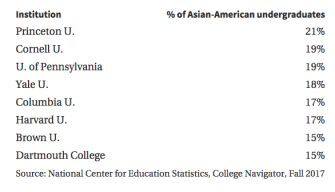 Larry Bacow, the recently inaugurated president of Harvard, noted in an open letter that his university’s “admissions process does not discriminate against anybody,” and that the U.S. Supreme Court has “has twice ruled on this issue and has held up our admissions process as an exemplar of how, in seeking to achieve a diverse student body, race may enter the process as one factor among many in consideration.”

The Supreme Court has previously ruled that universities, in efforts to offset historical racial discrimination, may consider race as a factor in college admissions. In 2016, the high court rejected a challenge to affirmative action admissions practices that was brought by a white woman who claimed she was denied admission to the University of Texas at Austin because of her race.

Justice Anthony Kennedy wrote that the school had “tried and failed to increase diversity” through race-neutral means, but also noted the inherent problems in trying to balance equal treatment with diversity goals, which the court’s majority upheld as a constitutional and valid pursuit if they meet certain conditions.

“…it remains an enduring challenge to our nation’s education system to reconcile the pursuit of diversity with the constitutional promise of equal treatment and dignity,” Kennedy wrote.

However, the confirmation of Justice Brett Kavanaugh could change how the Supreme Court approaches affirmative action.

“This is one area where there could be a significant change by replacing Kennedy with Kavanaugh,” Ilya Shapiro, a senior fellow at the libertarian Cato Institute, told NBC News.

The case is expected to last two to three weeks and will include interviews from a group of ethnic minorities who attend or have attended the university. If the decision is appealed, the case could someday reach the Supreme Court.

Research shows that those who spend more time speaking tend to emerge as the leaders of groups, regardless of their intelligence.
Up Next
The Present

A home library can have a powerful effect on children

A new study finds that simply growing up in a home with enough books increases adult literacy and math prowess.