Globally, coral reefs are estimated to provide up to $9.9 trillion in value by providing fish, protecting coastlines against erosion, enabling tourism, and other services. They take up very little space in the ocean — just 0.1 percent — but they serve as the habitats for a quarter of all fish species.

But these extraordinarily valuable environments have been devastated by human activities like bottom trawling, marine pollution, and of course, climate change. Because of these threats, 27 percent of the world’s coral cover has disappeared in the last three decades.

Pretty dismal, right? If we lose our coral reefs, millions of people will be faced with poverty and hunger as their primary food source and industry collapses. That scenario doesn’t even consider the devastation reefs’ disappearance would wreak on the global food chain, affecting every country on Earth.

Failing to preserve our coral reefs would be a catastrophe. But that doesn’t mean we have to give in to despair. In fact, we’re getting better and better at ensuring that coral reefs can survive. 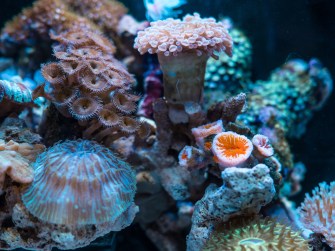 Photo by Jimmy Chang on Unsplash

During particularly hot spells, corals can’t perform their part in the symbiotic relationship they have with the colorful algae that live within their tissues. In order to survive on the short-term, they expel these algae, which provide 90 percent of their energy needs, turning the corals bone white in an event call coral bleaching. Normally, events like this happened once every 27 years, but that has recently gotten down to once every 6 years and will continue to occur more frequently as the planet warms up.

But corals exist that seem to fare better under the increasingly hot, acidic, and low-oxygen oceans — so-called super corals. Mangroves, for instance, tend to have harsher environments than the wide-open ocean, but many super coral species thrive there. Assuming the Earth doesn’t get too hot, we can transplant such corals to at-risk reefs to ensure that they and their ecosystems survive. What’s more, researchers are actively trying to breed hybrid coral species with even more robust characteristics.

Even so, corals can take between 25 and 75 years to reach sexual maturity, time that we don’t really have. Fortunately, a recent breakthrough technique enabled corals to grow 40 times faster than they do in the wild. This process, called microfragmentation, was discovered by accident when Dr. David Vaughn accidentally broke a coral into many small pieces, pieces which he discovered soon regrew at a rapid rate. Additionally, these corals actually grow together, rather than competing for space as natural corals typically do.

Working to restore dying reefs in this way, however, can be further improved. When reefs begin to die, their decline is often sped up by the flight of fish populations that perform a variety of beneficial tasks for coral reefs.

Recently, researchers discovered that fish can be tricked into sticking with a coral reef that’s in need of their services by playing audio recordings of a healthy reef. Broadcasting the sound of a dying reef has been found to increase local diversity by 50 percent.

What can I do?

These represent just a snapshot of the research going into coral reef protection. It’s important to take a sober, objective perspective when considering the future of the planet: that means both acknowledging the serious dangers we face as well as the good work we’re doing to combat it.

Ultimately, however, these efforts only serve to slow the decline of coral reefs. The only solution to preserving coral reefs is a significant reduction in global carbon emissions; in fact, it has been estimated that we can say goodbye to our coral reefs unless we slash emissions to 45 percent of their 2010 levels by 2030.

It’s a tall order, but we can reduce carbon emissions and buy time for coral reefs simultaneously. This will require massive global policy changes, but such changes are driven by individual actions. The Environmental Protection Agency has an excellent list of simple actions you can do that don’t require any significant investment or lifestyle change here.

If you want to get more involved, you can join the Citizens’ Climate Lobby. We typically think of lobbying as reserved for wealthy corporations, but it’s an activity open to anybody. The Citizens’ Climate Lobby trains and supports citizens across the world to contact and work with their representatives to influence climate policy. You can also support organizations dedicated to the protection of coral reefs, such as Dr. Vaughn’s Plant a Million Corals campaign or the Coral Reef Alliance.

Climate change and coral reef degradation are large, global issues; they can seem impossible to address individually. This mindset, however, is misleading. We’ve already massively transformed the climate by accident through our individual actions; the reverse is just as possible.

To preserve biodiversity and ecosystems, protected areas should be connected into a gigantic World Park.
Life

It is difficult to save a species that does not seem to care about saving itself.
Up Next
Hard Science