The ’20s came roaring in with two explosive headlines: reports of Australia’s inferno, and the speculation that the United States could be hurtling towards another war in the Middle East after the government’s assassination of Iranian military leader, Qassem Soleimani.

The two events seem ominous harbingers of our future, if warfare and the inherent ecocide that comes with it continues into the next decade. 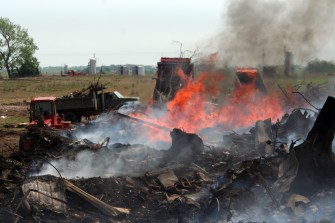 The environmental costs of war

As power struggles between nations escalate to armed conflicts and hot wars, the environment and ecosystems remain silent casualties. War radically changes the parameters for normalcy, and otherwise atrocious crimes against nature become not only justified, but viewed as necessary.

In war zones, land and natural resources are often contaminated by the oil from military vehicles and chemical weapons. Depleted uranium from ammunition rounds used in Iraq, for instance, left behind radiation that poisoned the soil and water in Iraq, creating a carcinogenic environment according to studies that linked the chemical residue of the weapons to increased cancer in the country. Furthermore, there’s the pollution caused by toxic fuel spills that can happen at air force bases, and the oil and chemical leaks that happen when infrastructure is damaged in war zones. Another problem is the deliberate destruction of oil fields and military base garbage that goes up in flames in burn pits.

In war-zones, deforestation can be another major issue. When wars drag out for a long time, people in those regions become internally displaced and need to migrate. In those situations, people try to heat themselves during the winter, causing deforestation further facilitated by warlords. In Afghanistan, cutting down timber and capturing wildlife for sale (like tigers) is encouraged by the Taliban to raise revenue for the group.

Though it has cut back, the U.S. Department of Defense is one of the largest consumers of fossil fuels in the world, and consequently one of the world’s top greenhouse gas emitters. In 2017, the Pentagon’s greenhouse gas emissions totaled more than 59 million metric tons of carbon dioxide equivalent. If it were a country, it would have carbon emissions larger than Sweden, Portugal, or Denmark.

Buildings and fuel are the main culprits of CO2 emissions. Forty percent of the greenhouse gases emitted are a result of the over 560,000 buildings and around 500 domestic and overseas military installations maintained by the Defense Department. Military operations account for the rest. For instance, in 2016 the Defense Department consumed approximately 86 million barrels of fuel for operational purposes. According to the Watson Institute at Brown University, the petroleum-guzzling vehicles and aircraft used by the U.S. military produces many hundreds of thousands of tons of carbon monoxide, hydrocarbons, nitrogen oxides, and sulfur dioxide as well as CO2.

War as a climate feedback loop

The justification for war is often to protect citizens, but human beings aren’t separate from the web of ecosystems that they are threaded within. For each violent act of war, there is an equally devastating reaction. Those ripple effects could soon be reaching U.S. shores.

According to Dr. Neta C. Crawford, Department Chair of Boston University’s Department of Political Science and the co-director of the study group Costs of War, military aggression and preparation exacerbates environmental problems that could lead to greater security risks and more war in the future as natural resources are depleted, causing a global refugee crisis.

“The Pentagon is very worried about the stresses of climate change leading to displacement… and they’re concerned about climate war,” Crawford tells Big Think in an interview. “They believe that it’s coming to a neighborhood near you.”

The problem, she notes, is that the Pentagon is a huge emitter of greenhouse gases and perpetrator of environmental destruction that increases the probability of war.

“They’re preparing a world for which the risks and consequences that they fear are more likely,” says Crawford, who believes that to decrease the likelihood of climate war, the Pentagon needs to be part of a large scale turn towards clean energy and the reduction of greenhouse gases. “But they don’t think that way, they just think war is coming, it will be caused by refugee crisis and fighting over resources such as fresh water, and we have to be prepared for it.”

Crawford believes that if humans can work out ways to prevent the worst consequences of climate change, and work to peacefully prevent any conflicts that are associated with increased environmental stress, war can be evaded.

“We can work out water agreements, we can negotiate prices, or we can provide, instead of a wall, to climate migrants, welcoming and care,” she emphasizes.

As tensions escalate with Iran, new war would pour gasoline over an earth already engulfed in flames, increasing the chance for more armed conflict. Perhaps at no time in human history have the stakes for maintaining peace been higher.

A new study in Human Reproduction says men have to keep moving.