The conversation around climate change has mostly focused on how we can best cut emissions, often referred to as climate mitigation. Significant sums have been invested by governments and private organizations into climate mitigation, which is — emphatically — a good thing. However, mitigation is just one side of the coin. Climate change experts also emphasize the need to invest in adaptive strategies that will help us deal with the world that our current emissions are already in the process of forming.

A recently published report by the Global Commission on Adaptation, an international organization led by UN Secretary General Ban Ki-Moon, Bill Gates, and World Bank CEO Kristalina Georgieva, focuses on the need for and potential nature of climate change adaptation. The report doesn’t pull any punches: It asserts that climate change will reduce agricultural yields by 30 percent, deprive 5 billion people of sufficient water, cause $1 trillion in damages to coastal urban areas, and push 100 million people below the poverty line by 2050 or sooner.

Importantly, the report isn’t just a forecast of doom and gloom. If unprecedented action is taken by investing $1.8 trillion in climate adaptation between 2020 and 2030, the world could realize $7.1 trillion in total net benefits. Specifically, the report calls for investment into five key areas: early warning systems, climate-resilient infrastructure, mangrove protection, improved dryland agriculture, and water resources. These areas produce what the report calls a “triple dividend”; that is, they have value in terms of the losses they avoid and the economic and social/environmental benefits they provide. 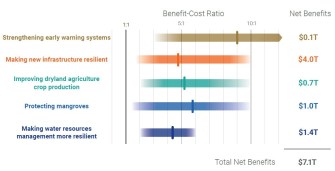 The benefit-cost ratios and net benefits of investing in five key areas between 2020 and 2030. Not that the total does not add up due to rounding.

Early warning systems, for instance, primarily derive value based off the damage they prevent. According to the report, just 24 hours of advanced warning for a severe storm or heat wave can cut the damage by 30 percent, and spending $800 million per year on such systems could avoid losses of up to $16 billion per year. For example, after cyclone Bhola killed 300,000 in Bangladesh, the country implemented a variety of early warning systems. Due in part to these systems, 2019’s cyclone Fani killed just five individuals in Bangladesh.

Investing in climate-resilient infrastructure would tack on an additional three percent cost to infrastructure projects but would yield benefits at a rate of four to one. This is particularly crucial to get started on straightaway, since infrastructure can’t typically be constructed quickly.

It might seem surprising, but the report found that investing in mangrove protection would be a powerful tool for climate adaptation. Not only do mangrove forest protect coastal communities (a service worth about $80 billion), they also provide habitats for fish, forestry, and recreational benefits worth up to $50 billion.

Global food demand is projected to grow by 50 percent by 2050, so investing in dryland agriculture is something of a no-brainer, especially since the agricultural industry is itself a significant source of greenhouse gases. As climate change reduces the world’s arable land, it will both increase the price of food and push so-called smallholder farms out of the agricultural industry, exacerbating global poverty. Smallholder farms produce roughly a third of the world’s food as well, meaning that this group is a crucial part of the global food supply chain. The report mainly focuses on how to protect these small farmers, such as in research into drought-tolerant varieties of maize, wheat, and rice; greater technical capabilities; insurance programs; and more.

As the planet continues to warm, we’ll also need to protect our water resources. The report warns that countries that do not make an investment in their water resources will be far less likely to survive and thrive in the future than those that do. Many solutions to protecting water resources also have the added benefit of preserving the environment; programs such as the Great Green Wall Initiative in Africa or Mexico’s protection of wetlands help to regulate the water supply and serve as critical ecosystems and carbon sinks.

A common criticism of climate change mitigation and adaptation proposals is that they are too expensive. Consider, for instance, the manycriticisms of the Green New Deal. Nobody expects that the wholesale transformation of huge swathes of the global economy will be a cheap endeavor. The question, however, is whether this costly investment will ultimately be worth it. Because this issue has become regrettably politicized, it is tempting to fall back on correspondingly liberal or conservative gut-based estimates of the possible return. This recent report offers a cooler-headed, quantitative view of exactly how much we stand to lose from inaction, and how much we stand to gain.

You can read the full report here.

Tags
climate changeeconomicsenvironmentglobal issuesnatural disasterpoliticsweather
In this article
climate changeeconomicsenvironmentglobal issuesnatural disasterpoliticsweather
Related
Life
Our antidepressant drugs are affecting animals and ecosystems
A toxicologist explains the impacts of antidepressants on fish — and no, they’re not getting any happier.
Hard Science
200 years of exploring Antarctica
What we’ve learning from the world’s coldest, most forbidding, and most peaceful continent.
Life
Most of the seafloor is a thick graveyard of ooze
Each year, several trillion pounds of microscopic silicon-based skeletons fall down the water column to pile up into siliceous ooze.
The Present
How California could save its rain instead of letting it drain into the ocean
Why can’t more rainwater be collected for the long, dry spring and summer when it’s needed?
Life
“Virivores” discovered: Microbes that survive on a virus-only diet
Carnivores, herbivores, omnivores — and now virivores.
Up Next
The Present
What young people around the world want most in a partner
A new study finds an unexpected trait that young people want in a lifelong partner.