“Plant more trees” is often the first idea that comes to mind when we think about how to prevent further climate change or at least adapt to its impacts. There are good reasons for this.

Multiple studies have shown that as well as trees being a fantastic way to store carbon dioxide, they offer other benefits, such as a cooling effect in cities, the ability to reduce flood risk and boost biodiversity, among other things.

We used measurements of rainfall across Europe to investigate what effect forests have on rainfall totals. We know that forests mostly increase local and downwind rainfall in the summer and winter, but the magnitude of this effect varies across regions and seasons.

To identify a realistic reforestation strategy we used the global reforestation potential map. In the area we looked at in our research (most of Europe), 14.4% of the land surface was considered suitable for reforestation, an area larger than France. 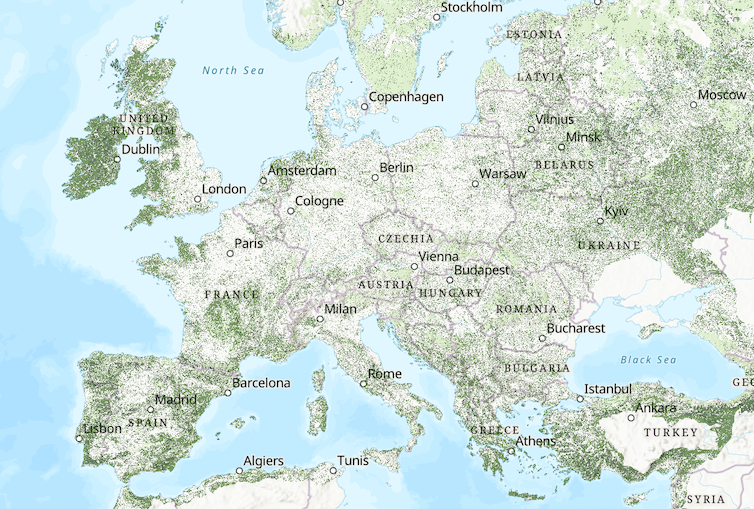 We then compared the effect of turning all that land into forest to the precipitation changes in a future scenario in which the world faces intermediate levels of climate change, based on current predictions. While the climate scenario projects wetter winters and drier summers, the inclusion of reforestation could enhance European summertime rainfall by an average of 7.6%, potentially offsetting some of the drying that climate change is projected to cause. However, we also found reforestation may exacerbate the increase in winter rainfall.

In the UK and Ireland for example, where around 37% of the land area has the potential for reforestation, we estimate that reforestation on this scale would increase precipitation by an average of 0.74 mm/day (24%) in winter and 0.48 mm/day (19%) during summer.

Several factors potentially contribute to this. Forests typically have a higher surface “roughness” than agricultural land. This creates more turbulence over the trees and slows the movement of heavy clouds causing them to rain over and downwind of the forests. The same is true of urban areas too – increased surface roughness from buildings can amplify the precipitation over cities and downwind of cities. And forests typically evaporate more water than agricultural land, particularly during the summer season, which likely means more rain.

These findings demonstrate the relevance of land management in the assessment of climate change pathways. Many countries are considering how changes to land cover could contribute to their climate mitigation and adaptation efforts.

For instance the recently published climate change risk assessment from the UK government’s Climate Change Committee advisory body highlights that the gap has widened between the level of risk we face and the level of adaptation underway. Intervention measures are therefore urgently needed but require careful consideration. The new report points out that we must avoid poor planning being “locked-in”.

Reforestation in particular needs careful planning, as trees need decades to grow, and as they interact in such a complex way with multiple aspects of the environment. For example, while we may see increased rainfall from forestation, we may also see decreased runoff and water availability, since trees typically evaporate more water than crops or grass.

The species of tree we plant also needs to be carefully considered – will it be able to cope with higher temperatures? Will the type of tree be resilient to the invasive species and pathogens projected to increase with climate change? If not, then we have wasted our time and money.

Policy makers therefore need to thoroughly and carefully assess any kind of nature-based solution before embarking on a scheme that may provide no long term benefit. It is all about making sure that we are putting the right intervention in the right place, at the right time.

Tags
climate changeearth scienceenvironmentglobal issuessustainabilityweather
In this article
climate changeearth scienceenvironmentglobal issuessustainabilityweather
Related
Life
Strange life forms create an “alien” ecosystem in an abandoned uranium mine
Slimy biofilms made up of bacterial and eukaryotic life forms have taken over an abandoned, flooded uranium mine in Germany.
Hard Science
Earth has an eerie “sodium glow,” and astronomers use it to image stars
Air currents in our atmosphere limit the resolving power of giant telescopes, but computers and artificial stars can sharpen the blur.
The Present
Climate change is altering the chemistry of wine
Smoke taint from wildfires is gross, even to wine amateurs.
Life
Our antidepressant drugs are affecting animals and ecosystems
A toxicologist explains the impacts of antidepressants on fish — and no, they’re not getting any happier.
Hard Science
The violence of the Tonga eruption is a wake-up call to watch other submarine volcanoes
Out of sight, but not out of mind.
Up Next
Health
Study finds exactly how long people want to live: it isn’t forever
Biomedical science assumes that people want to live as long as possible. They don’t.