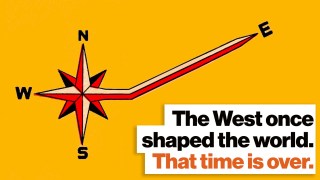 For a long time, the West shaped the world. That time is over.

The 21st century is experiencing an Asianization of politics, business, and culture.
▸
5 min
—
with
Parag Khanna

PARAG KHANNA: Our views and our theories about the world, even about history or the geopolitics of the present, tend to be shaped by the perspectives of the Western industrial democracies. And that means particularly, not just Western Europe and the United States and North America, but rather just the U.S. and the U.K. because of the English language and the role that the English language plays in shaping the overall global discourse. However, more and more what we're seeing is that particularly the U.S. and the U.K. have fallen a bit afoul of the kind of normative constructs that we tend to think of for a normal country, given the populism that is gripping both countries politically.

In fact, you can't really speak in a united way about Western civilization. Canada acts in many ways that are very similar to Western European. And countries like Germany and France have a very different political economy, if you will, than certainly the United Kingdom or the United States because they are the more traditional, social democratic welfare states. So within the West there is the social democratic welfare of states of Western Europe, and there is the more free market kinds of systems of the U.S. and the U.K.

So not only is the West not unified, and even if it were, it would still not represent the vast majority of the world's population. And so another reason why people are more and more calling into question the wisdom, the sanctity, the universality of the models of Western economies and politics is because they really don't speak to the experience today of 85 percent of the world's population, which are governed in very, very diverse ways. Now, the Europeanization of the world in the 19th century did spread parliamentary democracy and civil service and some kind of enlightenment values around the world. And 20th century Americanization also reinforced, to some degree, the virtues of democracy and entrepreneurialism and so forth. However, still, in this century of Asianization in the 21st century, there is a rising Asian confidence that they can determine their own political systems, their own models, adapt them to their own circumstances.

So, for example, they are very comfortable in Asia having a strong role for the state, for the government in the economy, meaning subsidizing industries, dictating which industries should be short of winners and be given more support from the government, having more non-tariff barriers and these kinds of restrictions on foreign investment and so forth to help to steer the economy in a direction that they consider to be stable and progressive and benefiting the whole country. So that's something that Asians are familiar with and comfortable with. And it obviously runs afoul of some traditional Western norms. That's one example. There are other examples also about Asians challenge the Western conventional wisdom and status quo. Many Asian societies, even democratic ones, have a preference for a technocratic kind of government. So they elect leaders, even in the democracies, like India or Indonesia and the Philippines, but they want to have a strong executive leader who has a long-term vision and a real agenda and program for national modernization that's going to uplift the whole population. And they give a long leash and trust. Today, some of the most popular leaders in the world, those with the highest public opinion rankings, are actually Asian leaders. It might be Prime Minister Modi of India or President Duterte of the Philippines.

When the Western industrial democratic populations look at these leaders, they tend to not think very highly of them. They think of them as people who have a very illiberal characteristic. Sometimes they're even described as thuggish. But in these democratic societies of Asia, they are actually very, very popular because they're also seen as getting things done. So a strong executive authority who is going to get things done is something that Asians have a lot of tolerance, a lot of patience for, if you will. So these are some examples of how the Asian circumstances and Asian practices and politics today are challenging what we tend to think of as normal or desirable in terms of political or economic governance. And again, so long as Asians are succeeding, they will gain ever more confidence that their system is not only right for them, but potentially a better system, that maybe we should learn from from what they're doing.