David Wallace-Wells is a national fellow at the New America foundation and a columnist and deputy editor at New York magazine. He was previously the deputy editor of The Paris[…]
Go to Profile 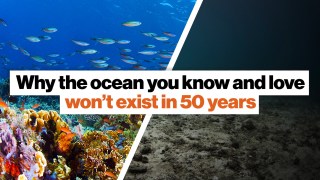 DAVID WALLACE-WELLS: I think there's basically no chance that coral reefs survive another generation. I think that we're looking at the total extinction of those biospheres by 2050 or so. There are some scientists who think there's some hope, and there have been some coral reefs that have recovered. But the impacts are so fast and so catastrophic, and we're so far from really changing course on carbon, it's hard for me to imagine that they endure, which means that the trips that we're now taking now to view those, we'll be taking really on the brink of mass extinctions.

And it's important to keep in mind that globally, we are living already through mass extinction. The World Wildlife Fund says that 60 percent of all vertebrate mammals have died since just 1970. There have been studies that say that insect populations may have fallen by as much as 75 percent over the last few decades. Animals are dying globally at rates never before seen in planetary history, and we are living through that and imposing those costs on the planet ourselves. The ocean is a particularly vulnerable system. It's not just the coral reefs. It's also the circulation patterns. It's the fish populations. And it happens we're also polluting the oceans with enormous amounts of plastic, which are really damaging. I think those people who really love the oceans should be quite terrified.

I think these ecosystems will be transformed really dramatically, very quickly, so that populations of fishermen that lived for decades on a particular fish community offshore will now have to find an entirely different way of life, because those fish will be swimming in totally different waters. And that is true at every level of the ocean ecosystem. The suffering there is not going to be any different than the suffering on land or the suffering experienced by humans. It will be quite catastrophic if we don't radically change course very, very quickly. And this is in part because the oceans do a lot to absorb warming. So the impacts are felt most intensely there.

If it were not for oceans, the planet would probably be already several degrees warmer than it is, but so much of the additional heat that we've been hot housing the planet with over the last few decades has been taken up by the ocean, and that means that the ocean has been totally transformed by that temperature.