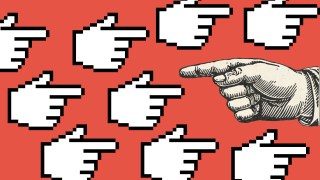 Collective Illusions is brought to you by Stand Together: a community of changemakers tackling our biggest challenges.

TODD ROSE: Technology allows a scale and speed of opinion creation that is extremely seductive to our brain. Social media is the great amplifier of collective illusions.

Collective illusion is a situation where most people in a group go along with an idea that they do not agree with simply because they think that most people in the group actually agree with it. And as a result, the entire group ends up doing things that almost nobody wants.

We have found collective illusions everywhere we look, from the kind of lives we want to live, to the country we want to live in, to the way we want to treat each other and even what we expect out of our institutions. Every time you go online, you are in a funhouse of mirrors.

The greatest strength of social media is its democratizing tendency. We don't have to just look to elites and a few news outlets to tell us about us. We can actually communicate with each other. But when we engage online, we tend to think that we're interacting with a reasonable sample of the actual population, but it's not true.

Close to 80% of all content on social media is generated by about 10% of the users. That 10% tends to be extreme on most social issues. They are the vocal fringe. When you have a vocal minority that is perceived as the majority, critical mass of us will actually either self silence, or we will actually go along to get along and it becomes a self-fulfilling prophecy. This is how collective illusions form.

It's not terribly surprising that some of the first people to start to use these tools to manipulate were leaders who need consensus to conserve power.

An example of this is Nicolas Maduro, the leader of Venezuela. For a long time, it looked like, on social media, that he had a pretty good beat on the consensus of the people that he led. So almost everything that he would say, stories that were written about him that were positive, would be retweeted and shared. And it looked like this represented some kind of consensus. But it turned out a significant percentage of his so-called followers were actually what we call social bots. These are fake accounts that only exist to retweet anything positive about him or that he said and, importantly, to attack the opposition when. Twitter ran them, the real consensus was with the opposition and that started to emerge and be retweeted as more and more people recognized that it was okay to say what they actually thought.

Social media is a free for all in terms of who can shout the loudest and who can silence other people in the name of masquerading as a majority and manufacturing collective illusions. Your willingness to conform and your unwillingness to challenge what you think the group believes will actually contribute to leading the group astray.

The solution to our online life is to get offline once in a while. The most important thing you can do is continue to have conversations with your family, with your neighbors, with your community. Don't carry that distortion over into the way you treat people in real life.

This series is brought to you by Stand Together, a community of change makers, tackling our biggest challenges. And to learn more about how you can partner with Stand Together, visit standtogether.org